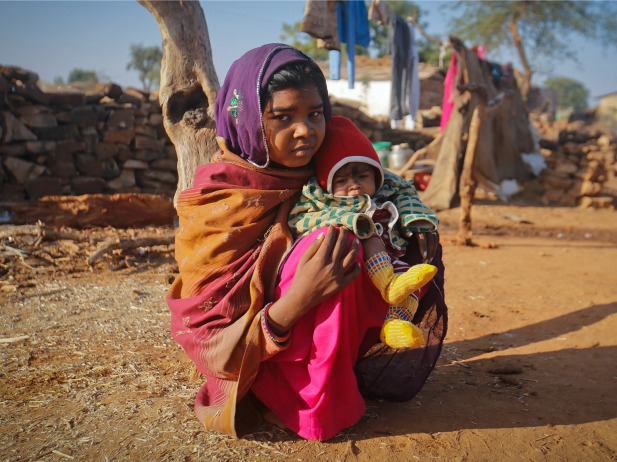 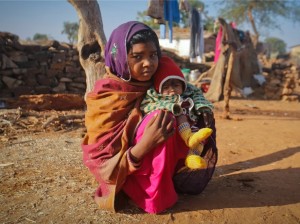 Krishna,14, sits with her four-month-old baby outside her house in northwestern India, January 2013 (Courtesy Reuters/Danish Siddiqu)

Last month, the United Nations Population Fund (UNFPA) published a report on the tragic consequences of unplanned adolescent pregnancies around the world. The report, Motherhood in Childhood: Facing the challenge of adolescent pregnancy, begins with a sober introduction by UNFPA Executive Director Dr. Babatunde Osotimehin. He writes, “When a girl becomes pregnant, her present and future change radically, and rarely for the better. Her education may end, her job prospects evaporate, and her vulnerabilities to poverty, exclusion and dependency multiply.”

Ninety-five percent of all births to adolescent girls occur in the developing world. Every day, 20,000 girls under the age of eighteen in the developing world give birth; girls living in developing countries have about a one in five chance of becoming a mother before adulthood. Two million of adolescent births worldwide will be among girls below the age of fifteen. These young girls are more than twice as likely to die in childbirth and have a much higher risk of obstetric fistula than if they had waited until they reached twenty to give birth.

Early childbirth not only greatly endangers the life of the mother, but also her child. According to the World Health Organization, the chance of stillbirths and death in the first week of life are 50 percent greater for a baby born to a mother below the age of twenty than those born to mothers between the ages of twenty and twenty-nine. The adolescent girl’s newborn is at increased risk for low-birth weight and sexually transmitted infections, including HIV.

Although the health consequences of early and unplanned births for adolescent girls are undeniable, the social and economic ramifications of motherhood in childhood are perhaps less obvious. The Motherhood in Childhood report found that the lifetime opportunity costs related to adolescent pregnancy in Africa were the highest in the world, amounting to billions of dollars: as a result, Uganda lost 30 percent of its GDP, Malawi lost 27 percent, and Ethiopia lost 15 percent.

The consequences of motherhood in childhood extend beyond the developing world. According to the Center for Disease Control and Prevention, children of teen moms in the United States perform worse in school and have more health issues than other children. They are also more likely to experience unemployment and incarceration as adolescents, and go on to become teen parents themselves.

And just like in the developing world, when girls in developed countries become mothers, much of their economic potential is lost. For example, adolescent pregnancy and childbirth in the United States costs taxpayers around $10 billion every year – and billions more if you count the lost potential of teen moms who are unable to finish school, enter the workforce, and contribute to the economy. In its 2013 Education at a Glance report, the OECD attributed economic growth in member countries to higher educational attainment over the past fifty years, especially among girls. But in the United States, only 50 percent of pregnant adolescent girls, most of whom go on to become single moms, finish high school by age twenty-two.

So what can countries do to prevent adolescent pregnancy and ensure that young girls have the opportunity to achieve their full potential? As the UNFPA report mentions, governments and international actors have already made progress reducing adolescent pregnancies through programs that promote girls’ education, create economic opportunities for women, and reduce HIV/AIDS rates. But the report also calls for a “shift away from interventions targeted at girls,” and instead toward more “broad-based approaches” that aim to build girls’ human capital and empower them to make their own decisions, especially regarding family planning. These topics were discussed at last week’s International Conference on Family Planning in Addis Ababa, Ethiopia. A revised strategy for ending motherhood in childhood must “target the circumstances, conditions, norms, values, and structural forces” that drive adolescent pregnancies, while also providing services to girls who are often isolated and marginalized during and after pregnancy.

To prevent adolescent pregnancy, issues such as gender disparity, child marriage, and poverty must be addressed. Community programs can tackle some of these issues by promoting girls’ education, family planning, and employment opportunities. Governments should also expand social and economic opportunities for women, and international organizations should keep combatting adolescent pregnancy at the top of the development agenda. Daunting as the issue may be, the humanitarian and economic costs of adolescent pregnancy are too great to ignore, and everyone stands to benefit from making motherhood in childhood an issue of the past.