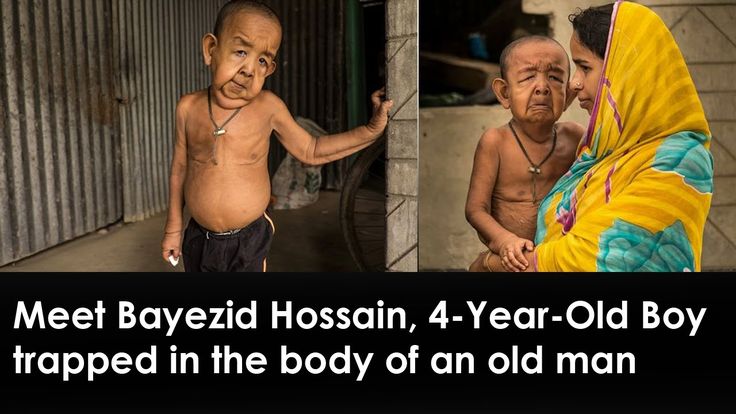 The real-life Benjamin Button: Boy, 4, looks like an old man and can’t go to school ‘because other children are scared of him’

When kids of his age play around and have fun, this “old” child struggles with his aching joints and other physical ailments. Fully aware of his degenerative condition, he tries to keep silent—but then, as a kid, often breaks into tears.

A four-year-old boy resembles an 80-year-old pensioner due to an incredibly rare condition.

People in the community stay away from him and children are afraid to play with him, despite him having above average intelligence.

Bayezid is believed to suffer from progeria, which ages the body at eight times the normal rate.

The disorder is said to have inspired the F Scott Fitzgerald novel and Brad Pitt movie The Curious Case of Benjamin Button, in which the character is born an old man and ages backwards. Bayezid Hossain, from southern Bangladesh is only four years old but resembles an old man due to a rare ageing disease Source: Daily Mail

The little boy’s face is swollen, eyes are sunken and he has a condition that makes his skin sag. Like an old man, he has aching joints and has difficulties passing urine. His bones are fragile and his teeth are broken, yet, Bayezid still has an active mind.

Purely out of ignorance, people in the community don’t like to go near him and kids are afraid to play with him—despite his above average intelligence, and a kind nature.

Progeria patients normally die from heart attacks or strokes at an average age of 13.

Bayezid also has a form of cutis laxa, a rare connective tissue disorder in which the skin hangs loosely in folds.

His 18-year-old mother, Tripti Khatun, says she is amazed at how clever her son is, but it breaks her heart that his appearance is so unusual.

She said: ‘Bayezid only learned to walk aged three but he had a full set of teeth at three months old.

‘His physical growth is completely abnormal but mentally, he has wonderful conversation, very aware and is very intuitive for his age.

‘He does not look like other children. He looks like an old man. As a first time mother I can’t bear the pain of seeing my child like this.’

When Bayezid was born at a government maternity hospital, in 2012, Tripti and her husband Lovelu Hossain, 22, were devastated as doctors had no idea how to treat him.

Tripti said: ‘I was terrified to see him when he was born. He was just flesh and bones. He looked like an alien and it was heartbreaking for me.

‘Doctors had no idea what to do, they said they had never seen such a baby. They warned us that there was nothing they could do.’

After they returned home the news of their abnormal child quickly spread around the village and neighbours lined up outside the family’s home to see him.

But Tripti and her husband said they received no support from the local community.

People feared being close to Bayezid and often gossiped about the couple’s capabilities as parents, as Tripti and Lovelu are first cousins.

In rural parts of Bangladesh and southern Asia it is normal practice for cousins to marry, and the pair tied the knot at 13 years old.

As Bayezid grew older both his personality and body developed much faster than other children in his village.

Tripti added: ‘He’s very stubborn and knows what he wants, and he gets very impatient. But he’s playful, his mind is very sharp, and he’s full of conversation.’

As time has passed his neighbours have slowly gotten used to his presence and have now fondly tagged him the ‘old man’.

Bayezid doesn’t go to school but he loves to play with his ball, drawing on paper, and even breaking his toys so he can fix them back up again.

He said he has already spent approximately Rs 4 Lakh (£4,000) since Bayezid was born on seeing different doctors and healers but none have been able to treat the condition.

He added: ‘We’ve been to hospitals, shrines, fakirs, shamans— whoever suggested whatever.

‘Yet his situation remains the same and he’s probably getting even worse day by day. My son isn’t a normal baby and it’s tragic for any parent to know that his child will not survive for long.

‘But I am proud of him. He is extremely intelligent compared to other children of his age. His relationship with his cousins is very friendly and funny.

‘He understands his condition but he doesn’t like to talk about it. He just cries when he feels awkward.’

Debashis Bishwas, a consultant from Magura Central Hospital, in Magura, met with Bayezid last month and told his parents he believes he is suffering from progeria and cutis laxa.

He said he fears he may only live for 15 years.

Dr Bishwas said: ‘His signs suggest he is suffering from a very difficult disease.

‘The skin of a Progeria patient start getting loosened like an elderly person months after birth.

‘We can only advise the family to get specialized care in a hospital like Dhaka Medical College Hospital or Bangabandhu Sheikh Mujib Medical University in Dhaka, as there’s no treatment here.’

Lovelu understands there may not be a cure for his son’s condition but he fears Bayezid is not getting the best possible chance of survival because the family are poor.

He said: ‘His mother is in uncontrollable tears all the time. It has been four years now and nothing has changed. It is so painful to see that our first child suffers a disease we cannot even treat.

‘We’d like more children but we’re too scared. We feel very helpless.

‘Like every other parent, we want our baby to live a long and healthy life but we feel only a miracle will save us now.’

Mum and Dad of the tot, who was born in Bangladesh, said they ‘thanked God’ for son who has Progeria

The tot, who looks like an 80-year-old man, has a wrinkled face and skin, shrunken body and sunken eyes.

Born in the district of Magura, Bangladesh, on Sunday, the newborn suffers from the rare condition called Progeria.

Doctors were left stunned by his appearance.

One medic, who has been treating the little boy said:”The baby does not look like a new born at all.

“There are prominent signs of ageing such a excessive wrinkles and rough skin texture.”

However, the parents of the baby are jubilant with the birth of their ‘miracle’ child.

Biswajit Patro, a farmer, was ecstatic and couldn’t hold back his happiness over the arrival of his son.

He said of the birth: “We can only thank God. There is no need to be unhappy about the appearance of my son.

“We will accept him the way he is. We are so happy to have a baby boy in the house.”

Biswajit and his wife, Parul Patro, said they have been getting used to the interest in their baby’s unusual appearance from curious guests. 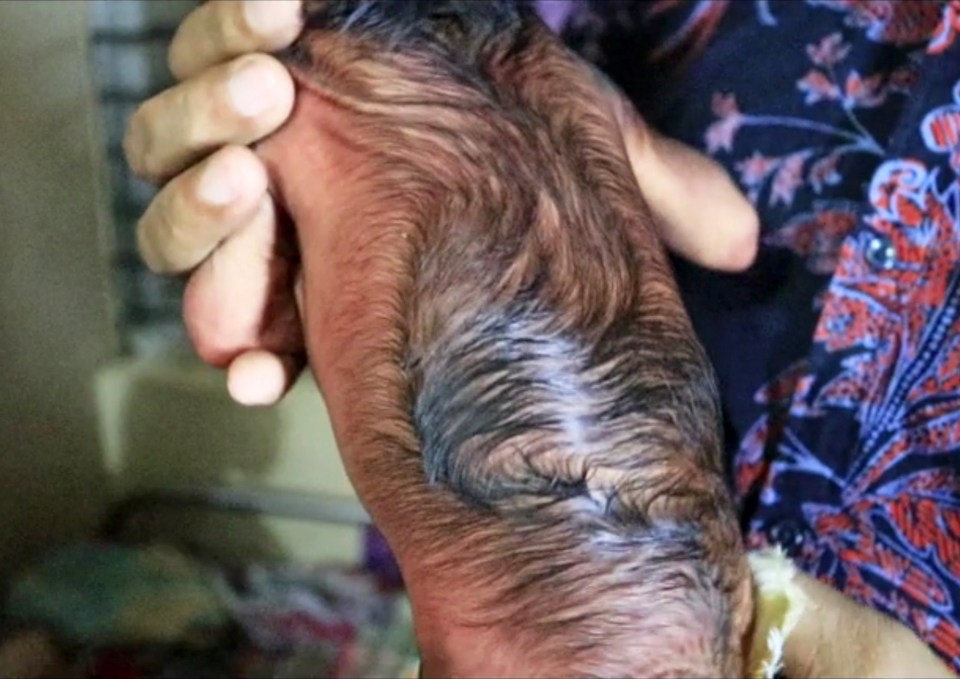 He added: “There are prominent signs of ageing such a excessive wrinkles and rough skin texture.” Source: THE SUN

He added: “We have been getting a lot of visitors. Relatives, neighbours and even people from neighbouring villages have come to see our son.

“We are happy to host them all. We are already blessed to have to have a daughter. Now we are a family of four. What else can we ask for.”

The doctors at the local hospital assured the Patro family the baby would do well for now. However, it is still uncertain what measures can be taken to treat the condition.

Progeria is a rare genetic condition, which is also known as Hutchinson-Gilford progeria syndrome (HGPS), and affects around one in four million births worldwide.
Children who have the disease do not usually live past the age of 13.
Both boys and girls can be born with it, and it is a result of a single mistake in a certain gene which results in it making an abnormal protein.
When the cells use the protein, called progerin, they can break down more easily. It then builds up and the children age faster.
The condition is not inherited or passed down in families.
Children who have the disease can look healthy when they are born, but show signs in their first year.
They develop a bigger head, large eyes, a small lower jaw, sticky out ears, a thin nose and have high pitched voices.
Other signs are a loss of body fat, muscle and hair. The children also begin to get diseases which you would see in people of over 50, including hardening of the arteries and heart disease.

Travel: Honeymoon Bay, Tasmania and The Sunset in ...
SOAR LIKE AN EAGLE
Something Wild Photostory:At Home With Tippi Hedre...
January Birthstone And Birth Flower: Meaning and S...