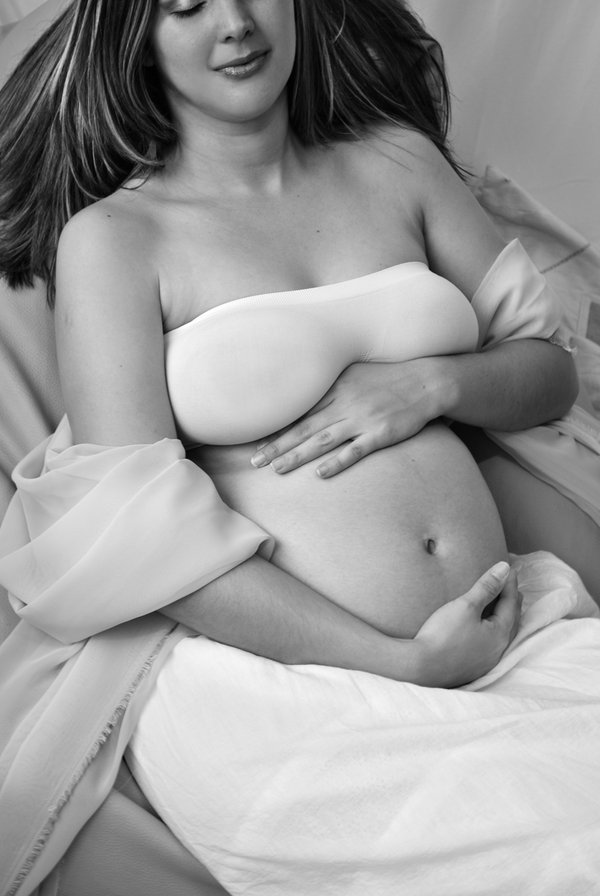 Your baby, even when in the womb, has preferences. A new study published in PLOS One found that fetuses move and respond more when their mothers touch their own stomachs than when they talk to the babies from outside the womb, according to Time magazine.

Specifically, researchers found that when mothers touched their stomachs fetuses showed “more arm, head, and mouth movements than when the women did nothing or when they spoke to the baby,” Time reported.
“Although it is speculative to suggest, it might well be that the increases in arm movements in response to maternal touch are also directed responses towards the source of the stimulation,” the study’s authors wrote.

How to Have a Smart Baby: Pregnancy Brain Power Boosters

Taking care of yourself now will help prepare your baby to be an active learner.

You already know that living a healthy lifestyle while you’re expecting helps your baby grow big and strong, but did you know it can make her smarter too? In fact, simple choices that you make every day, from eating a leafy-green salad for lunch to hitting the treadmill for a workout, can help build her brain. “What you do while you’re pregnant can have as much impact on your child’s brain development and future intelligence as what you do after you give birth,” says Diane Ashton, M.D., M.P.H., deputy medical director of the March of Dimes. Learn some of the ways that healthful habits give your baby’s smarts a head start.

Taking a prenatal supplement, one with the B vitamin folic acid, is essential. Folic acid has long been known to play a key role in the formation of healthy brain cells, and a recent study published in the Journal of the American Medical Association found that women who took folic acid early — from four weeks prior to conception through eight weeks into pregnancy — had a 40 percent lower risk of giving birth to a child with autism. To get more folic acid in your diet, look to excellent sources: fortified breakfast cereals, lentils, and leafy greens like spinach. Omega-3 fatty acids, especially DHA, also have a major impact on the production of neurons, the nerves in the brain that fire electrical impulses and send messages to the rest of the body. Get your fill from foods such as wild salmon and other fatty fish, walnuts, ground flaxseed, and eggs fortified with omega-3s. Iron helps promote the growth of healthy red blood cells, which carry oxygen to your baby’s brain. Red meat is the best source, but it is also found in plant foods such as beans, spinach, and tofu, as well as iron-enhanced cereals.

If you’re worried that you’re not eating enough fruits and veggies (perhaps you’re struggling with morning sickness) sneak them into your diet, recommends Parentsadvisor Connie Diekman, R.D., past president of the Academy of Nutrition and Dietetics. Put dried fruits in oatmeal and salads. Dice or puree veggies and add them to soups and sauces. Get more nutrients by drinking milk and orange juice. However, ask your doctor before taking additional supplements.

Working out will give you the stamina you need for labor and delivery, and it can also strengthen your baby?s brain. According to a study in the Journal of the American College of Sports Medicine, children of moms who exercised during pregnancy scored higher on tests of language skills and intelligence at age 5 compared with the kids of sedentary moms. Why? Moderate levels of cortisol — a stress hormone that?s also secreted when you exercise — promote the growth and development of your baby’s brain, as well as his other major organs. Experts recommend 30 minutes of moderate exercise for pregnant women on all or most days of the week.

Some women develop problems with their thyroid for the first time during pregnancy, and it’s important to treat any issues that arise. “Either too much or too little thyroid hormone in a mother’s blood can be harmful to the fetus,” says Lise Eliot, Ph.D., author of What’s Going On in There? How the Brain and Mind Develop in the First Five Years of Life. Low levels of thyroid hormone have been linked to subtle IQ deficits later in childhood. Researchers don’t currently recommend thyroid hormone screening for all pregnant women, but moms-to-be at risk can have their levels monitored with a simple blood test. To help keep the gland functioning normally, consume 220mcg of iodine per day; it’s found in yogurt and milk, as well as iodized salt.

You might feel silly talking to your baby now, but it can help you form an intimate relationship early on, says Parents advisor Harold Koplewicz, M.D., president of the Child Mind Institute, in New York City. Research suggests that about halfway through your pregnancy, your baby can hear and respond to sounds. You can talk, sing, or read to her. Some studies have shown that babies seem to calm to a song, a book, or a voice and may recognize rhythms that they heard in utero.

The longer your baby’s brain has to develop in utero, the better off he’ll be in the long run. At 35 weeks, his brain volume is only two thirds of what you’d expect it to be at 39 or 40 weeks, says Dr. Ashton. Although some factors can make you more susceptible to preterm delivery, such as carrying multiples or having preeclampsia, you can help your baby stay put longer. Don’t smoke or drink alcohol. Manage serious illnesses such as diabetes, as well as stress. And every time you wish your pregnancy were over, remember that your smart, healthy baby is worth the wait.

LIFE: The Cost Of Burying A Loved One In Garden Of...
Good For Health: Sleep on the Left Side
The Impossible Dream (The Quest)
ENTERTAINMENT: Shirley Temple (Black) Would Always...