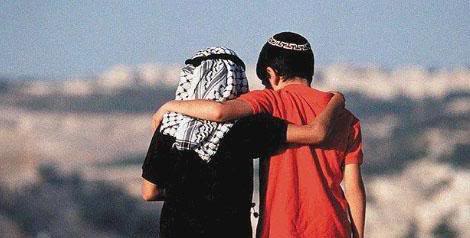 The conflict between the Israelis and Palestinians has given many the tragic belief that Arabs and Jews have been fighting for centuries. However, history shows that Arabs and Jews lived in peace for many years. Tensions between Jews and Arabs is not some sort ancient blood feud, but rather recent instance in history.

Things to know before reading

1. Not all Arabs are Muslim. In fact some Arabs belong to the Christian, and Jewish faith.

2. Some Jews do consider themselves Arabs or Middle Eastern. They are known as Mizrahi or Sephardic Jews.

The Times of Muhammad

In the time that Muhammad lived in Medina there was peaceful relations between Jews and Muslims. There were even  times that Jews and Muslims actually fought together. The tribes of Medina  which included several Jewish tribes had sworn an oath to Muhammad to protect Medina. The Quraysih tribe, whom were enemies of Muhammad, set out to attack to Medina.  Unfortunately the battle was set to take place on the Sabbath, and many of the Jewish tribes did not want to fight.  A Rabbi by the name of Mukhyriq told his followers that they had to uphold their promise to Muhammad. So, on the Sabbath, Rabbi Mukhyrib, and some of his followers went to fight with Muhammad to protect Medina. The Muslims won , but during the battle Rabbi Mukhyrib was killed. Muhammad was upset when he learned about the death of  Mukhyrib. Muhammad  praised the  memory of the Rabbi and called him “the best of Jews”.

The European Middle Ages was also known in history as the “Islamic Golden Age” .  During this period much of the  world’s scientific progress came from Muslim countries while Europe was still in the “Dark Ages”.  Advancements in medicine, astronomy, philosophy, poetry, mathematics were made during this time.  These advancements were not only made by  Muslims, but Jews as well. Jewish scientists were allowed to practice their religion, and were able to contribute to scientific advancements.

Non-Muslims had very prominent positions in this era.  One example is The Islamic Sultan Saladin had many personal physicians that were Christians, and Jews. The most famous of Saladin’s Jewish physicians was Maimonides, who was also one of the greatest Jewish scholars. In the middle-ages Muslims, Christians, and Jews not only lived in peace, but also were trusted colleagues in scientific progress.

During WWII, Morocco was a French protectorate . When the Germans occupied France a new government was formed called the Vichy French government (named after the city where it was based). The Vichy government allied themselves with the Germans, and followed the Nazi’s Anti-Semitic policies. The Vichy government instituted policies of identifying and rounding up Jews in France. They also instituted Anti-Semitic policies in  French controlled territories  like Morocco.  Morocco during this time had population of 200,000 Jews. For many years Jews and Arabs lived in peace in Morocco. King Mohammad V of Morocco  refused to obey orders by the Vichy government to identify all Jews in Morocco. Mohammad V believed that the Anti-Semitic  policies was against Islamic law, which protects Non-Muslims that live in Muslim countries. The King  replied to the Vichy government by saying “There are no Jews in Morocco. There are only subjects”.  If it was not for the actions of King Mohammad V, the Jewish population in Morocco could have suffered a horrible fate.

By showing these historical examples I hope that you understand that Jews, and Arabs can live in peace.  The current tensions between Arabs, and Jews is recent, and not an ancient blood feud. If it was possible for Jews and Arabs to live in peace in the past, there is no reason it could happen in the future.

How did the tensions between Jews and Arabs begin?

After World War II many Jews fled  from Europe to the British protectorate of Palestine. The major reason that Jews fled to Palestine was because  European Jews could not go anywhere else . Many countries during and after World War II would not accept  a large amount of Jewish immigrants. Also, at this time many Arab countries were under the control of European countries such as Britain, and France.  There was a lot of anger by Arabs towards Europeans for occupying their countries.

Misa and Fukumaru: The Extraordinary Friendship
WOMEN: The Slavery and Atrocities Stories
Buddhist Monks Engage in a Religious Rite Quite Un...
Little girl with big appetite takes social media b...