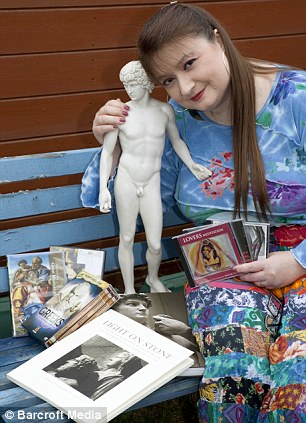 I’m in love with a three-foot statue of Adonis: Carer, 40, spends every day with £400 moulding of the Greek god of desire she has dubbed ‘Hans’

A carer from London says she has ditched men for good – after falling in love with a statue.

The object of her affection is a three-foot moulding of the Greek God Adonis that she bought for £395.

Reighner Deleighnie, 40, has been in a relationship with the statue for six months and spends hours every day with her Carrara marble boyfriend, which heats up with touch.

Enjoys kissing and talking to the marble statue

Reighner named her companion Hans because the Pointer Sisters’ hit song Slow Hand was playing in the cab the day she brought him home.

She enjoys reading and talking to her companion, and keeps him close by when she watches television and eats dinner.

She also kisses and caresses him, imagining the pair of them walking through meadows of wildflowers or at the seaside.

Although Reigner is besotted with her Hans, she confesses she would never marry him because, she claims, she could never be faithful.

She shares the condition with Amanda Whittaker, a 27-year-old shop assistant from Leeds who has fallen head over heels for the Statue of Liberty.

Amanda has a shrine to the landmark in her home and confesses to a passionate love affair with a drum kit.
SOURCE:
dailymail.co.uk

My Angel by Prince Royce by [Official Video R...
PEOPLE: Who Is The Youngest Elected Senator In Phi...
Born to be true, not to be perfect
HEALTH: SAVE YOUR MONEY BY NOT SPENDING ON MEDICAT...