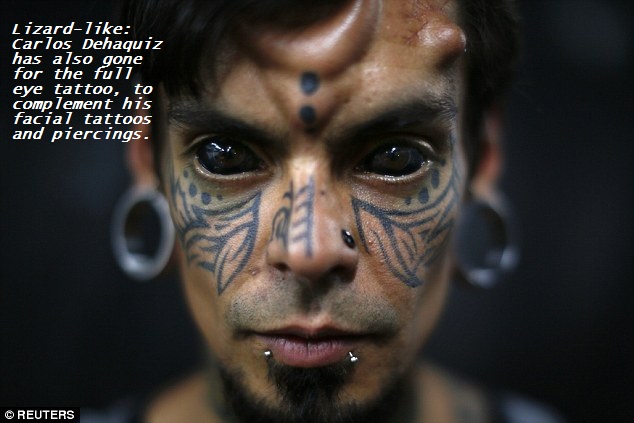 Here are some photos of extreme tattoos:

Mary Jose Cristerna, a Mexican known as The Vampire Woman.

Maria Jose Cristerna (or Marijose) says that she had a history of domestic violence and decided to reinvent herself. She has currently been married for 8 years. The 37-year-old mother-of-four began her physical transformation after escaping an abusive relationship.

Mary Jose Cristena, before and after

Emilio Gonzalez: My impression is that people have something to say, my work has been shown throughout history by the extreme it is. Body modifier word tells you everything MODIFY BODIES. Nowadays any young man who does body modification is believed body modifier, make a 3D implant or a tongue splitting … Aaaah, they are already modifiers. lolSo they see my work with nose removal and it seems catastrophic for them. lol
How do you call yourself as a BODY MODIFIER when an extreme modification scares you? The truth is because of it, I have left to put my work in networks, including BME. I think I’m one of the few modifiers, if not the only one, who really has worked most of the human body from a simple implant to an amputation of legs.

Kala Kawai has 67 piercings and 75 % of his body is tattooed so it’s a good job he chose a career in body modification, running his own studio in hawaii. He has stretched the holes in his earlobes to 4 inches, inserted various silicon implants on his head, can screw metal spikes into the top of his skull, has a split tongue and generally looks extremely frightening. Also worth bearing in mind is that he split his own tongue using dental floss and did all his own piercings.

Brazilian tattoo artist who goes by the name [Rattoo], a play on the Portuguese word [rato] that means [rat], poses for pictures as he shows off his skin tattoos, his tattooed eyes and his modified split tongue during Tattoo Week events in Sao Paulo, Brazil, Friday, July 19, 2013. Extreme: It may seem a modern conceit, but eyeball tattooing was first described in 150AD by the Romans. Brazilian tattoo artist who goes by the name [Rattoo], a play on the Portuguese word [rato] that means [rat], poses for pictures as he shows off his skin tattoos, his tattooed eyes and his modified split tongue during Tattoo Week events in Sao Paulo, Brazil, Friday, July 19, 2013. Tattoo Week is an annual event that attracts international tattoo artists and body piercing artists as well as consumers

Alaskan defendant Jason Barnum,  whose  nicknamed “Eyeball” because of a tattoo that darkened the white part of his right eye pleaded guilty to shooting an Anchorage police officer.He was sentenced to 22 years in prison in Anchorage Superior Court.

“I think Jason Barnum decided a long time ago that his life was about being hostile to people,” said Anchorage Police Department Chief Mark Mew, arguing before a court last week that a judge should impose a tough sentence. “I’d like you to take a look at Mr Barnum. He has the right to do this to himself and to express himself. We can’t sentence him for that, but I think we can consider a guy’s attitude and his behaviour.”

But when Barnum took the stand, he was reflective about what happened.

“I’m humbled by what the chief said. I was out there pretty much running crazy,” Barnum told the court. “Everybody knows that I’m not the nicest guy. I understand that what I did was wrong. I can’t take none of it back.” 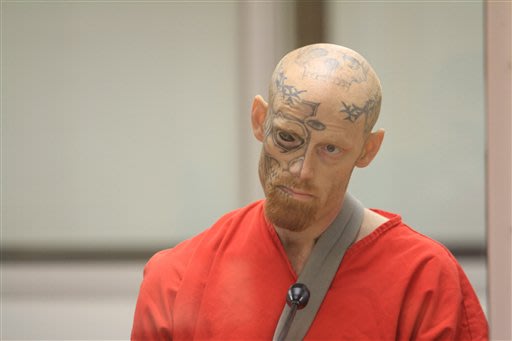 Matt Gone who states he first began getting tattoos 20 years ago to help mask a muscular birth defect, is now fairly well known across Oregon for the black checker pattern he’s adorned himself with. 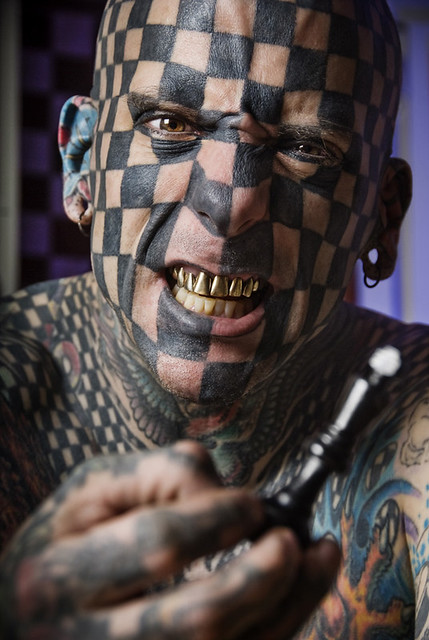 The Catman–Dennis Avner, a 54-year-old US Navy veteran underwent fourteen different operations to  morph himself into a tiger. Avner’s operations included the splitting of his top lip like a feline cleft lip, the flattening and upturning of his nose, elongating his ears, implanting silicone into his cheeks and forehead, filing his teeth into sharp points, and tattooing his body and face. Catman is complete with ears, whiskers, and even a mechanical tail. Avner states he has loved cats his whole life and has always had a strong relationship with them. He began his transformation over 30 years ago in different countries around the world, due to certain body modifications being illegal in the United States. Avner had a well paying job as a computer technician, allowing him to afford all these body modifications. He believes, “Why be human when you know you’re not?” Erik Sprague (born June 12, 1972, Fort Campbell, KY  better known as The Lizardman, is a freak show and sideshow performer, best known for his body modification, including his sharpened teeth, full-body tattoo of green scales, bifurcated tongue, and recently, green-inked lips. He has stated an ambition to get a tail transplant.

Julia Gnuse, commonly known by the nickname The Illustrated Lady, holds the Guinness Record for being the most tattooed woman in the world, having coverage of 95% of her body (including her face). Gnuse was born with porphyria, a condition in which sunlight results in blistering of the skin. As the blisters often result in scarring, she began getting tattoos as a way to cover up the scars. However, the tattoos do not prevent the skin from blistering as they are purely. She currently resides in Foothill Ranch, California.

Elaine Davidson is the “Most Pierced Woman” according to the Guinness World Records.

When examined by a Guinness World Record official in May 2000, Davidson had 462 piercings, with 192 in her face alone. By August 9, 2001 when she was re-examined she was found to have 720 piercings. Performing at the Edinburgh Festival in 2005, the Guardian reported that she now had 3,950 body piercings. She has more piercings in her genitalia than in any other part of the body – 500 in all, externally and internally. The total weight of her jewelry is estimated to be about 3 kilograms. As of May 2008, Davidson’s piercings total 5,920. As of Feb. 2009 her piercings total 6,005.

She was born in Brazil and is a nurse. She claims she does not drink or use drugs. She now resides in Edinburgh, Scotland. Violence Against Women: Rape in an Immoral Culture