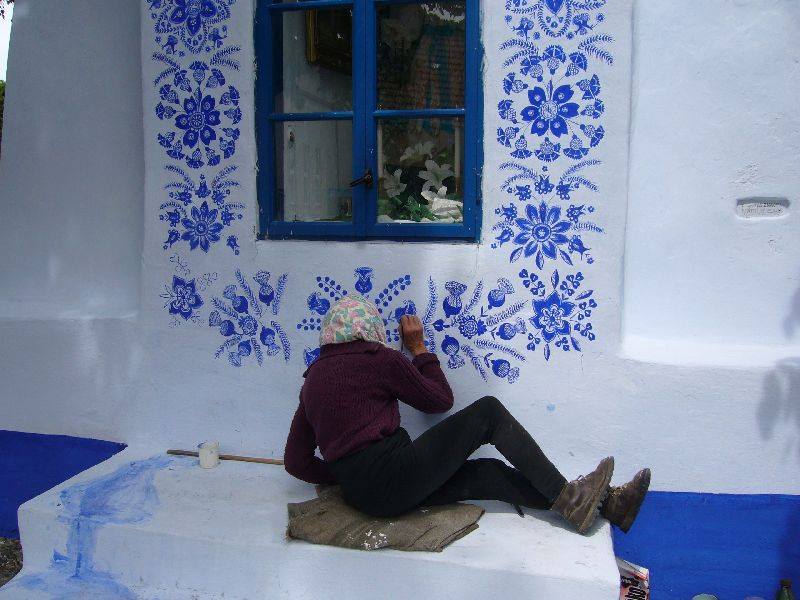 Remember the little Polish village where every house is covered with painted flowers? A Czech granny who is 91 years old is taking to the streets and creating unique works of art on the houses of her friends and the local church.

Street art is, by definition, visual art created in public locations. It is usually unsanctioned artwork executed outside of the context of traditional art venues. The term gained popularity during the graffiti art boom of the early 1980s and continues to be applied to subsequent incarnations. Stencil graffiti, wheatpaste poster art or sticker art, and street installation or sculpture are common forms of modern street art. The terms “urban art”, “guerrilla art”, “post-graffiti” and “neo-graffiti” are also sometimes used when referring to artwork created in these contexts. (tresbohemes.com) 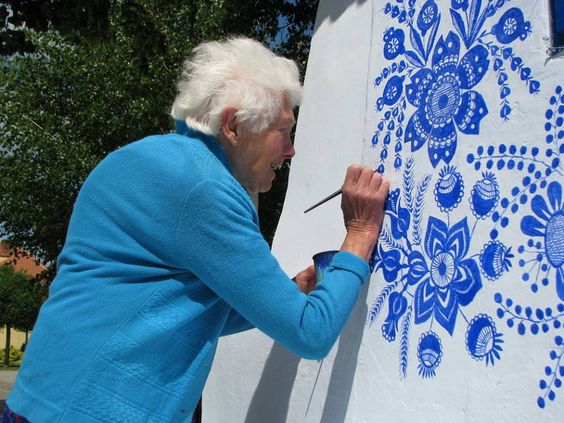 “I try to help decorate the world a bit,” says Anežka Kašpárková (Agnes Kasparkova) or babička as she would be called in Czech. Anežka is from Louka, a village and municipality in Hodonín District in the South Moravian Region of the Czech Republic. It’s a small village with a small population, yet thanks to Anežka’s efforts, one of the most beautiful villages in the Czech Republic. (tresbohemes.com) Image: in.pinterest.com

90-year-old resident of Louka, Czech Republic, is aiming to make her hometown just as charming, and spends every spring and summer adorning window and door frames with majestic designs. 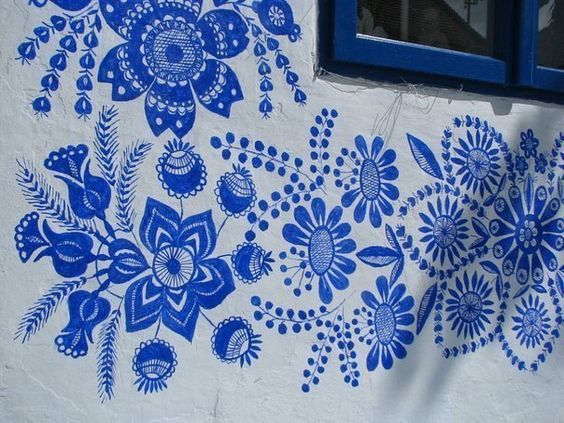 Anežka (Agnes) Kašpárková, a former agricultural worker, picked up the hobby from other local woman who had been doing the same for years. Using vibrant blue paint and a small brush, she creates intricate floral patterns inspired by traditional Moravian (southern Czech) artwork. Despite attaining both local and viral acclaim, she has insisted that it’s purely for pleasure. “I am an artist,” she stated to Czech media. “I just enjoy it and I want to help.” (Bored Panda) Age really is just a number, especially when it comes to embracing your creativity. Scroll down to see this artistic grandma in action, and let us know if you wouldn’t mind her using your house as a canvas. 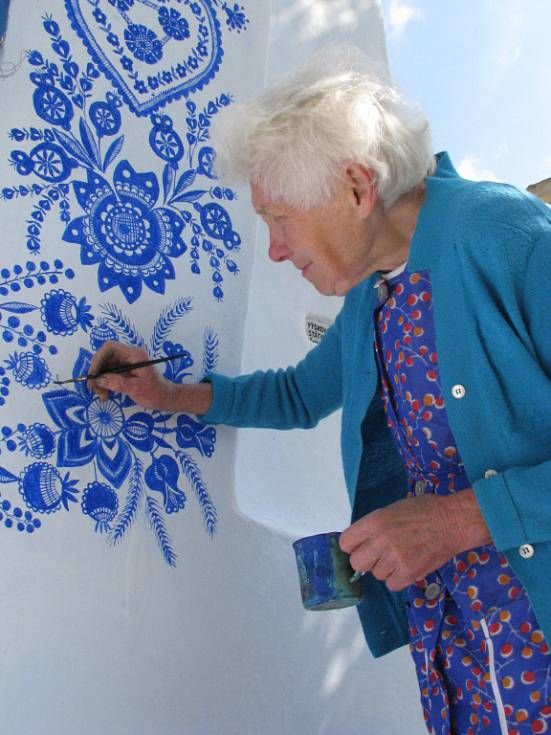 Image: in.pinterest The adorable artist still spends most of her free time doing what she likes most – hand-painting her neighbors’ houses with traditional Moravian motifs. (tresbohemes.com) For the townsfolk of Zalipie, every day is a celebration since the isolated outpost blossomed into one of Poland’s most iconic villages.

What was once a bleak and forgotten cluster of smoke-blackened huts, has over the years transformed into a kaleidoscopic feast of colour – and one of southern Poland’s best-kept treasures.

Each house is decorated with its own vibrant floral motif, painstakingly hand-painted by the town’s housewives. No smoke! The practice dates back to when the smoke from stoves seeped outdoors through tiny holes in the walls scarring the homes with sooty black blotches Not the white paint! The women tried to cover the marks up by whitewashing over them but many were still faintly visible through the paint Feast of colour: Now every house in the village is decorated with its own individual flower design – some that cover an entire house Over the bridge: Even the village bridge is adorned with a floral colour scheme Kaleidoscopic: Zalipie was once a bleak and forgotten cluster of smoke-blackened huts Iconic: The isolated outpost blossomed into one of Poland’s most iconic villages Back to basics: They made the brushes from the tail hair of local cows while they used fat from their dumplings mixed with pigment to create the colours

But once modern cooking techniques and improved ventilation came in to practice, these cover-ups were no longer necessary.

But the villagers kept them up all the same.

The village now even holds an annual painting competition around the festival of Corpus Christi that sees women, and some men, compete to be crowned the village’s best flower-painter. Ubiquitous: Now the art has spread from houses onto almost anything in the village that can be painted, from the village bridge, to bins, outhouses and even chicken coops Catharsis: The competition was introduced as part of a wider effort to help the country recover from the horrors of the Second World War, in which 17 per cent of the population died

The competition – known as Malowana Chata – has been held every year since 1948, introduced as part of a wider effort to help the country recover from the horrors of the Second World War, in which 17 per cent of the population died.

Now the art has spread from houses onto almost anything in the village that can be painted, from the village bridge, to bins, outhouses and even chicken coops.

A small ancient village in South-Eastern Poland, Zalipie, is definitely one of the country’s top tourist attractions. Not because it has five-stars hotels or massive glass buildings, but on the contrary, due to its small wooden cottages, which are painted in the most vibrant colors.

This lovely tradition started with more than a century ago, when every single female resident in Zalipie begun to paint her home with floral motives, as she wanted to cover up some particular faults. And since the women didn’t have professionally made equipment, they manufactured the brushes themselves, using hair from the tails of their cows. As or the paint itself, women used fat from the dumplings they made. Very important is that each year, all the women had to repaint their charming drawings. And they did so, after the Feast of Corpus Christi, when they weren’t so busy with their farm work.

In time, this joyfully and unique habit was passed on from one generation to another. Moreover, women found inspiration in nature and local folklore, so their paintings became both larger and more colorful.

One woman in particular became really obsessed with this tradition. Her name was Felicja Curylowa (1904 – 1974) and she decorated every surface of her three-bedroomed cottage, no matter how small or large. After her death, the beautiful house was turned into a museum. And it is quite a source of attraction among tourists!

Currently, Zalipie is considered one of the most picturesque villages in Poland. But, despite its beauty and unique tradition, Zalipie is not invaded by tourists.

Going there is not only a perfect way to escape the busy life found in large cities or towns, but also a good, relaxing manner to simply enjoy life and art.

In other words, Zalipie can be seen as a massive painting, full of color, life and history. The whole village is painted. Even the dog’s cages or old fountains, not to mention fences, windows and interior walls. It’s a real delight! 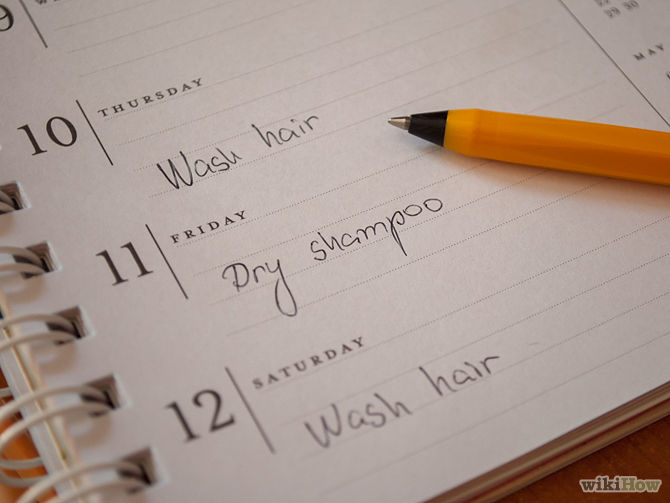 And the perfect time to visit Zalipie is spring, as during this season, since 1948, the village hosts an important contest: the Painted Cottage competition or “Malowana Chata”. It started after the World War II ended, in the local authorities attempt to cover up the damage done the war. Official data shows that more than 17% of Poland’s population died in the war.

VIRAL PEOPLE: A Heart Touching Story Of A Devoted ...
NATION: What Happens to Expats After 2017 in KSA: ...
MUSIC: Woman In Love by Barbra Streisand
That Crazy sweet Feeling Called Love