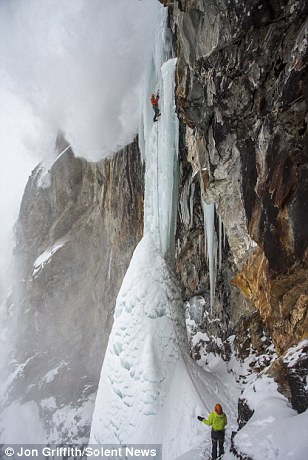 By Katie Amey for MailOnline

These stunning pictures show you exactly what it’s like to be ice-climbing while an avalanche crashes down a mountain.

An adventure that few of us will ever experience first hand, photographer Jonathan Griffith, has captured the entire frightening, freezing ordeal.

Through the falling snow, the brave climber clings on to the side of the icy mountain as it showers over him. Ever wondered what it’s like to be stuck in an avalanche? These incredible photos depict an ice-climber’s unfortunate experience in Italy The ice climber was at 6,000ft in the Italian Alps near Cogne with alpine climbing photographer Jonathan Griffith

Thankfully, the ice climber, who is almost 6,000ft high, manages to hold on and safely makes it through. The spectacular pictures were taken by alpine climbing photographer, Jonathan Griffith, during a visit to the Alps near Cogne, Italy.

The 31-year-old, from London, set up his camera on a tripod and used a radio control to take the pictures while supporting his friend Jeff Mercier’s weight with a rope.

Jonathan watched on as his daring pal took on the climb known as the ‘hard ice on the rock,’ already knowing that there would be an avalanche.

Though the climber was almost 6 thousand feet high, he managed to hang on and make it safely through the snowfall.
Ever wondered what it’s like to be stuck in an avalanche? These incredible photos depict an ice-climber’s unfortunate experience in Italy
Experience climber Jeff Mercier is half-way up the precarious frozen waterfall when an avalanche begins to fall
At one point Jeff Mercier is complete engulfed by the falling snow and it is not known whether he has managed to hang on
Climbing photographer, Jonathan Griffith, took the photos via a radio control that he set up, while he supported his friend by holding the rope.

Jonathan said: ‘It was snowing when we arrived so we knew that avalanches would be coming down.

‘Ice climbing is always quite risky, but the shots are nice as they are quite atmospheric.

‘It was more like getting a very cold spray of ice and wind rather than anything life threatening.

‘Of course that is totally dependent on the snow itself – in this case it fell as light powder so there is not much weight behind it.

‘I actually set the camera up on a tripod and had a radio control.

‘It’s something I do a fair bit when ice climbing actually as it means I can still climb but get nice ‘third person’ shots as well.’

Celebrities: How Do They Look With or Without Make Up