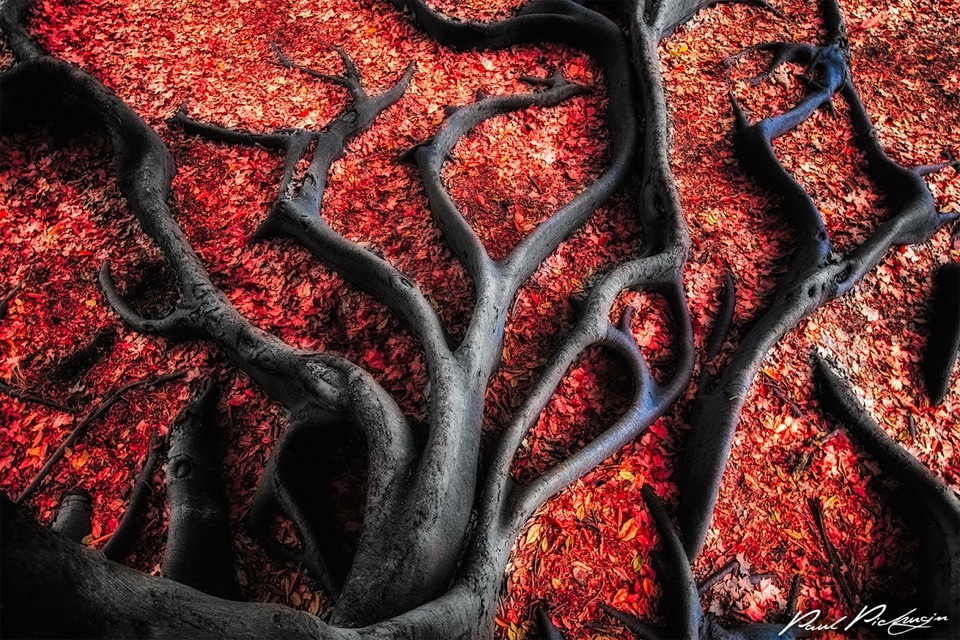 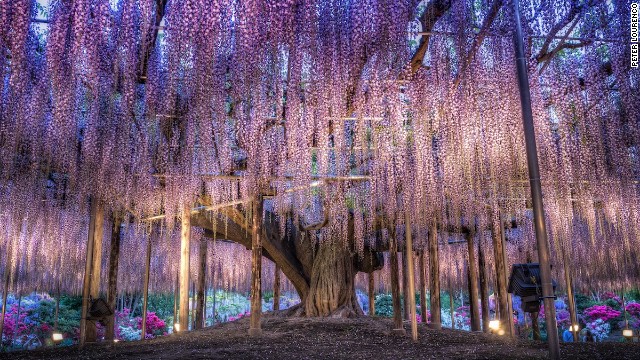 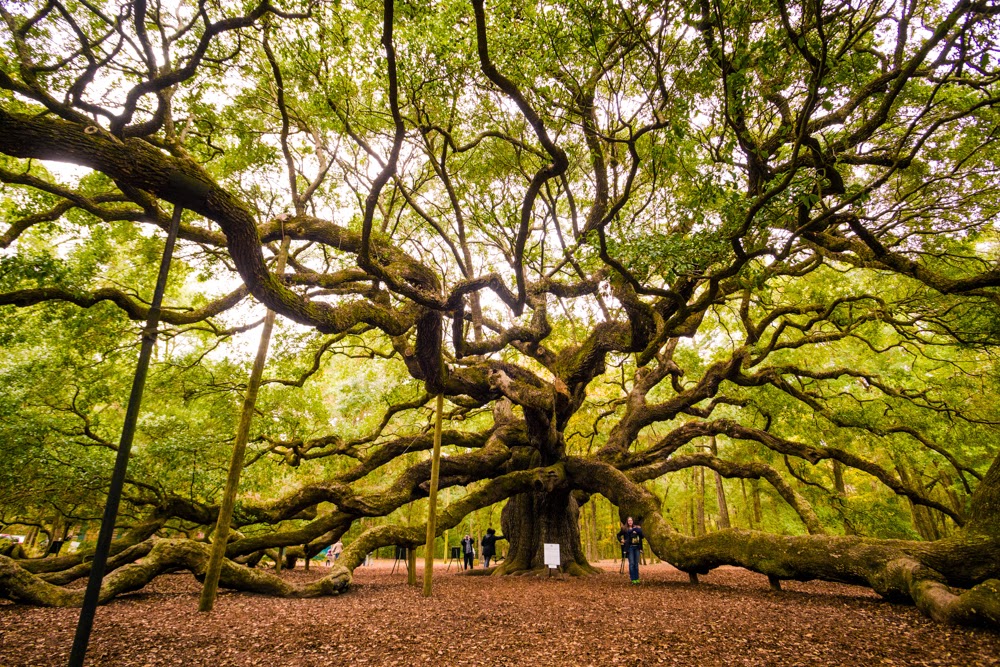 4. Sagano bamboo forest, Kyoto, Japan: The bamboo is extremely large and seems to extend to the heavens. 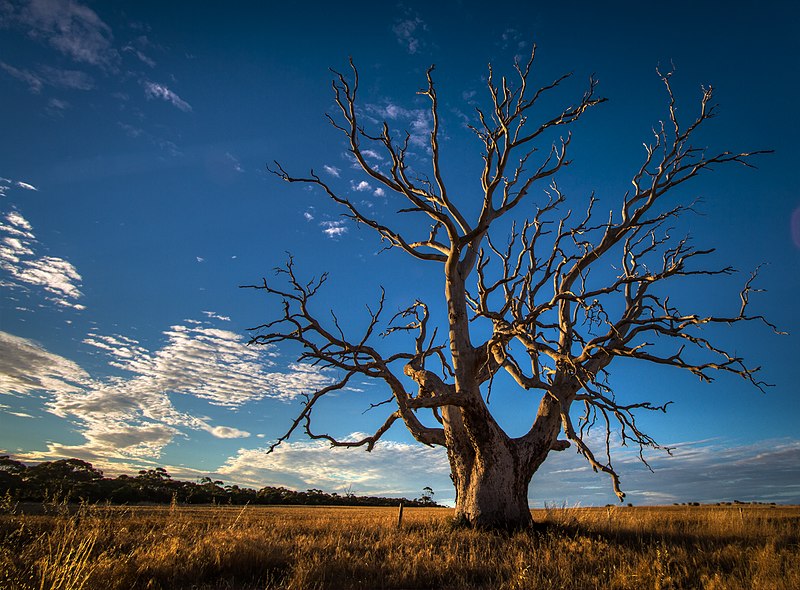 7. Montgomeryshire tree : This striking old tree in Old St Mellons, Cardiff, could be seen by motorists as they drove down the busy A48. 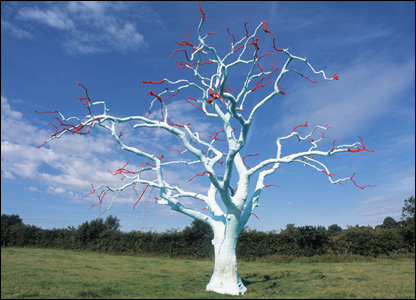 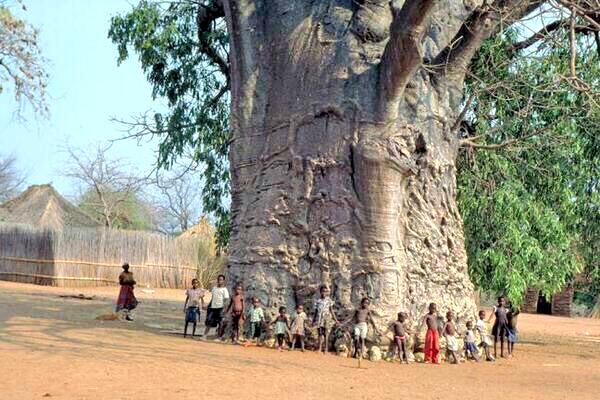 9. Madagascar’s Beautiful Baobab Trees : A freshwater crab in Montaigne de Francais, Northern Madagascar. They are vital to mangrove ecosystems and are an important food for coastal villagers.

10. Ponthus Beech in Brocéliande Forest, France :  A beech tree aged more than 600 years which stays in a private part of the Broceliande Forest, a magic forest in Britanny, this one in which Merlin the Wizard used to live. 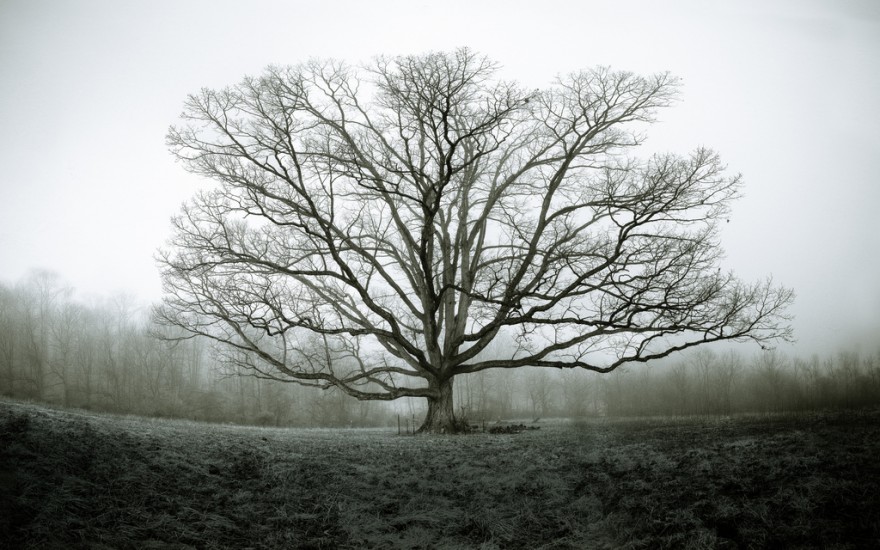 12. The tree wrapped around a stone Buddha in Wat Mahathat, Ayutthaya, Thailand. Tree and shrine, India. Angkor Wat is the largest religious monument in the world but it threatens to become almost overrun by the nature around it. 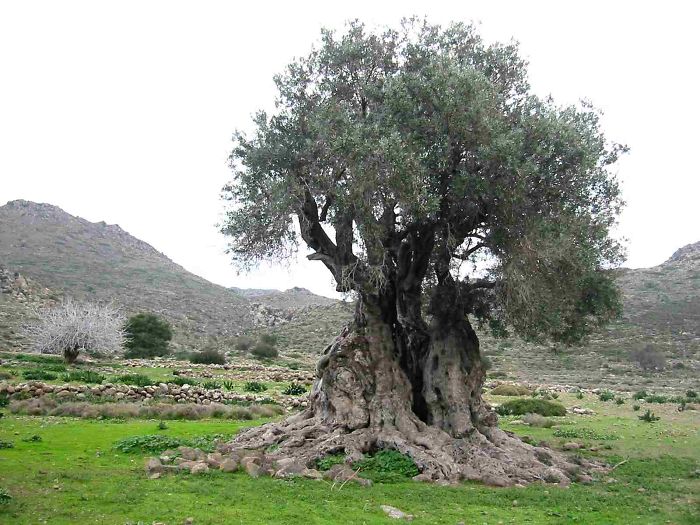 15.  Banyan Tree is the national tree of India.

The national tree of India, banyan is a very huge structure, long and deep roots and branches symbolize the country’s unity. One can find banyan trees in throughout the nation. The huge sized tree acts as a shield, protects from hot sun. This is the reason why the tree is planted near homes, temples, villages and roadsides. In the rural parts of the country, banyan tree is considered as the focal point of the Panchayats and the gathering place for village councils and meetings. The tree is also considered sacred by the Hindus of India. With high medicinal value, banyan is often used as a herb to treat and cure many diseases. 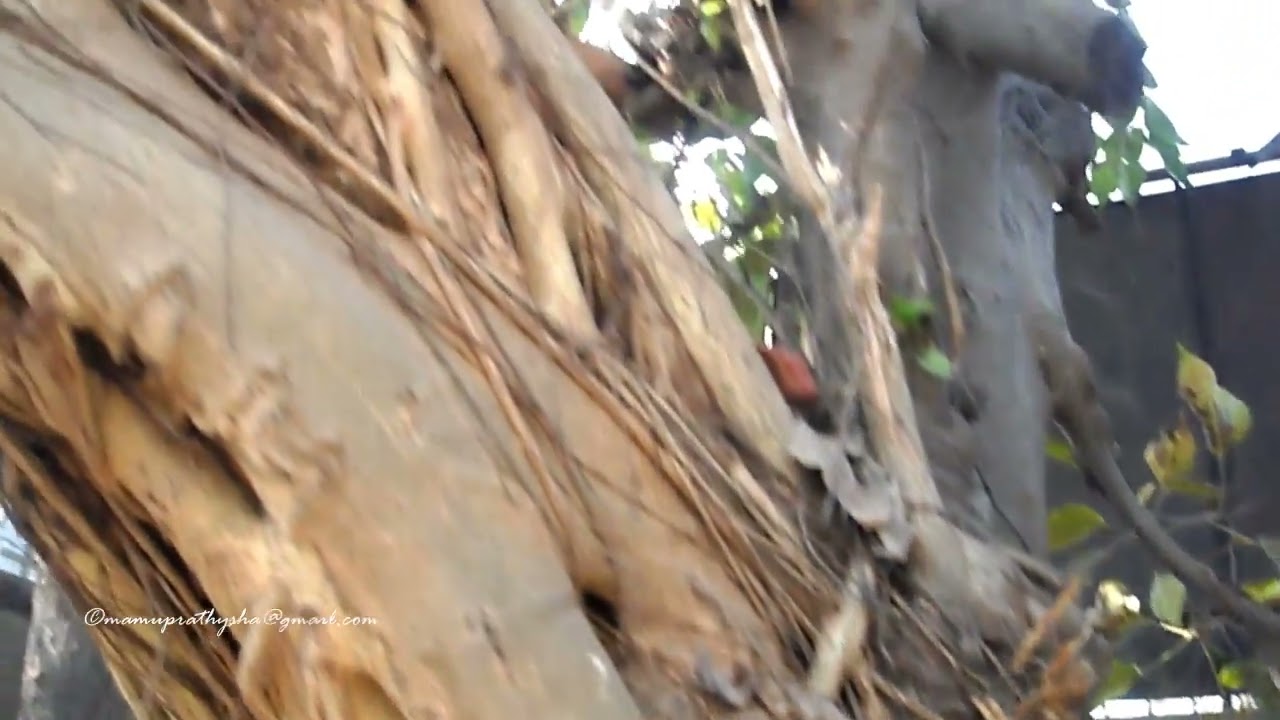 The Quiver Tree Forest or Kokerboom Woud in southern Namibia, houses 250 specimens of the Aloe dichotoma tree. This unique forest became a national monument in 1995. It appears as if the trees were given some electric shock. Their branches have risen over the years seeming to reachup towards heaven and leaves have shrunk to form spikes that look like quivers. These trees grow upon the rocks. When he was a young boy, Axel Erlandson moved from Sweden to California with his family. But it wasn’t until he was 41 years old that Axel began to shape trees as a hobby. His designs became more and more complicated and eventually he opened a “Tree Circus.”

To create this specific tree, “The Basket Tree,” Axel planted six sycamore trees in a circle and grafted them together when they grew another foot. When children asked him how he made the trees grow like this, he would simply reply, “I talk to them.”

The Bodhi Tree was seen as a sacred shrine even during the lifetime of the Buddha by King Asoka, who held a festival every year in its honor. However, his queen is what many people would call “the jealous type” and had it killed by mandu thorns. But the Bodhi tree had the last laugh when it regrew in the very same spot and had a magnificent temple built next to it. Even today, the tree is the most important of four Buddhist pilgrimage sites.

This Montezuma cypress is located in the Mexican state of Oaxaca and has the stoutest trunk of any tree in the world. One theory is that it’s mulitple trees grown together. However, DNA testing has proven that it is indeed one tree.

In 2001 it was placed on the UNESCO tentative list of World Heritage Sites, and guess what? It is sometimes nicknamed the Tree of Life because of all the animal shapes that can be seen in its gnarled trunk.

The Methuselah tree is like the estranged grandfather that no one in your family talks about.  It is estimated to have germinated around 2832 B.C. It is located in White Mountains of California. The tree is in Inyo National Forest and while visits to the site are permitted, the exact location of the tree is kept secret for its protection. Methuselah is an ancient bristlecone pine tree and until 2013 was the oldest known non-clonal organism on the Earth. This title was superseded when a different bristlecone pine in the same area was discovered to be 5,063 years old. The exact location and identity are kept secret to avoid possible vandalism. ( what’s wrong with people? )

This is because an even older tree, nicknamed Prometheus, was accidentally cut down in 1964. At 4,843 years old, the bristlecone pine is worth protecting, even if it means anonymity.

Sarv-e Abarqu, also called the “Zoroastrian Sarv,” is a cypress tree in Yazd province, Iran. The tree is estimated to be at least 4,000 years old and, having lived through the dawn of human civilization not far away, it is considered an Iranian national monument. Many have noted that Sarv-e Abarqu is most likely the oldest living thing in Asia.

This incredible yew resides in a small churchyard of St. Dygain’s Church in Llangernyw village, north Wales. About 4,000 years old, the Llangernyw Yew was planted sometime in the prehistoric Bronze Age — and it’s still growing! In 2002, in celebration of the golden jubilee of Queen Elizabeth II, the tree was designated as one of 50 Great British trees by the Tree Council.

The Alerce is a common name for Fitzroya cupressoides, a towering tree species native to the Andes mountains. There’s almost no telling how old these trees can get, since most of the larger specimens were heavily logged in the 19th and 20th centuries. Many botanists believe they are the second-longest living trees on Earth aside from the bristlecone pine of North America. To date, the oldest known living specimen is 3,640 years old.

Though the Senator suffered tragedy in 2012, this iconic tree bears mentioning here. Formerly located in Florida, the Senator was the largest bald cypress tree in the United States, and was widely considered the oldest of its species known to exist. It was also likely the largest U.S. tree of any species east of the Mississippi River. Estimated to be around 3,500 years old, the Senator was used as a landmark for the Seminole indians and other native tribes. The Senator’s size was particularly impressive because it endured many hurricanes, including one in 1925 which reduced its height by 40 feet.

The tree got its name from from Sen. M.O. Overstreet, who donated the tree and surrounding land in 1927.

This tree, an example of the species Cariniana legalis named Patriarca da Floresta in Brazil, is estimated to be about 3,000 years old, making it the oldest non-conifer in Brazil. The tree is believed to be sacred, but its species is widely threatened due to forest clearing in Brazil, Colombia and Venezuela.

Popular folklore has it that the forest is cursed or there is some weird or black magic in the forest. However, nothing of that sort has been reported in the forest. The Crooked Forest featuring weird-shaped trees is located in western Poland. There are around 400 pine trees in the forest. All these trees grow with a 90-degree bend at the point where the trunk shoots up from the ground. It is said that some tool or technique devised by early humans was deployed to give the trees such a shape. Unfortunately, the reason for this is not yet known. The flowers themselves appear on the tree at most twice a year – naturally. They look like some strange alien frost has deposited itself on the trunk. 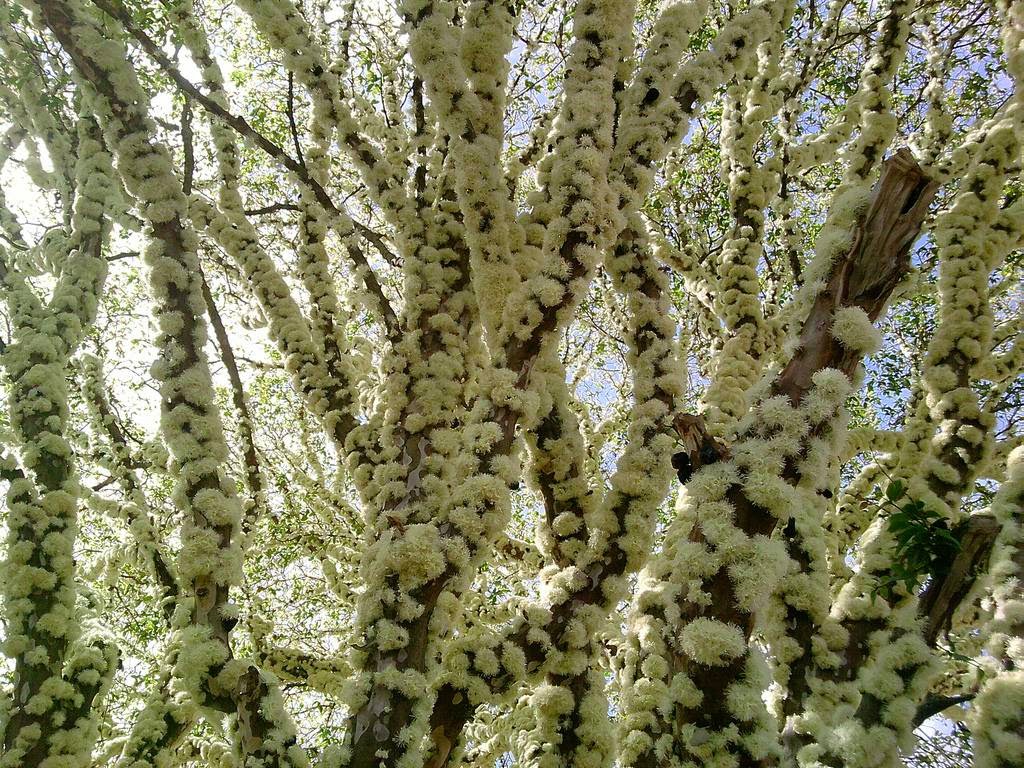 A heavily laden jabuticabeira. As you can see, the fruit grows directly out of the trunk and branches. Another remarkable thing about jabuticaba fruit is that they taste delicious! 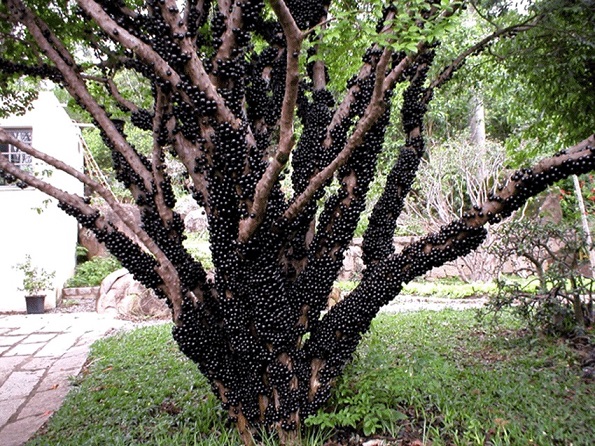 The flamboyant tree is endemic to Madagascar, but it grows in tropical areas around the world. The rainbow eucalyptus, which grows throughout the South Pacific, is both useful and beautiful. It is prized for both the colorful patches left by its shedding bark and for its pulpwood, which is used to make paper. These beautiful Jacarandas, with their violet flowers, grow in South Africa. 35. Avenue Of Oaks At Dixie Plantation In South Carolina

This avenue of oak trees was planted some time in the 1790s on Dixie Plantation in South Carolina. This ancient olive tree is located on the Greek island of Crete and is one of seven olive trees in the Mediterranean believed to be at least 2,000 to 3,000 years old. Although its exact age cannot be verified, the Olive Tree of Vouves might be the oldest among them, estimated at over 3,000 years old. It still produces olives, and they are highly prized. Olive trees are hardy and drought-, disease- and fire-resistant — part of the reason for their longevity and their widespread use in the region. 37.The President, Third-Largest Giant Sequoia Tree In The World, California

There are colonies of clonal trees that have lived for tens of thousands of years, but there’s something majestic about a single tree able to stand on its own for millennia. These ancient trees have borne witness to the rise and fall of civilizations, survived changing climates, and even persevered through the fervent development of human industry. They are a testament to the long view that Mother Nature takes in tending the Earth. With that in mind, consider the world’s 10 oldest living trees.