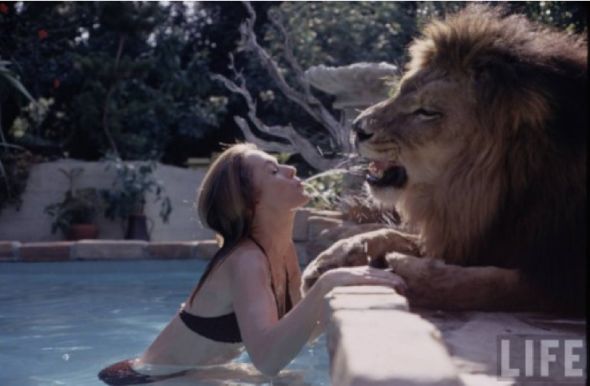 Tippi Hedren, (born Nathalie Kay Hedren, January 19, 1930) is an American actress, former fashion model and an animal rights activist, perhaps most famous for her role in Alfred Hitchcock’s The Birds, is an actress of formidable gifts. Hitch himself said, when directing her in that classic film, that Hedren had “a faster tempo, city glibness, more humor [than another frequent Hitchcock heroine, Grace Kelly]. She displayed jaunty assuredness . . . and she memorized and read lines extraordinarily well.”

In 1969, Tippi was filming a movie in Africa and visited an abandoned house in Mozambique occupied by 30 lions and their cubs. The time she spent there with the lions changed Hedren’s life forever and prompted her and her husband to make a movie about what they had seen.

Little did the Tippi and her husband know that this film starring dozens of African lions would be an eleven year investment that would later cost them their marriage.

Production on Roar began with a dose of reality for the Hollywood couple. When they told a veteran animal trainer they needed 50 lions for their film, they were promptly informed that “you can’t simply force a bunch of adult lions and strangers to live together. They’re individuals that have to be introduced gradually or they may kill each other. Or you.”

So what did they do? They decided to start their own pride of 50 homegrown lions, acquiring them one by one. Tippi met with Ron Oxley, a man with an animal-rental business in Soledad Canyon (an animal-rental business renting out lions= obviously completely normal in those days?!), who told them that “to get to know anything about lions, you’ve just got to live with them for a while.”

Tippi and her family were first introduced to Neil, a lion they could safely hug and get to know who became the first of their live-in lions, 4-5 days a week. Their Californian Sherman Oaks house soon became a half-way house for lion cubs who spent a period of time associating themselves with humans first (Hedren’s family) and then would eventually return to the ranch in Soledad Canyon.

“The time between 6 weeks and 6 months, when the lion is becoming quite large and strong, is a time of wonder,” Tippie remembers.

As preparations for the film progressed, neighbors began to complain about the family’s ‘pets’ and authorities cracked down.

And so the family packed up their things (and their wild cats) and moved to the remote Soledad Canyon to live on the reserve with the lions, where they continued the on-and-off filming of Roar.

For a project that cost over $17.5 million, the film only grossed just over $2million in the end.

During production, Tippi’s daughter Melanie, 19 years old at the time, was attacked by a lioness and needed 50 stitches to the face. The director of photography was scalped.

Although this did not deter Tippi from dedicating her life to the animals, she now takes a different view on the idea of wild animals in the home and believes they should not be kept as pets. Tippi Hedren with daughter, Melanie Griffiths at the Shambala Preserve.

After the zoo at Michael Jackson’s Neverland Ranch was shut down, his two tigers, Thriller and Sabu, were sent to live at Shambala. When Jackson passed away, Hedren said she had told the tigers that he died. “You don’t know what mental telepathy exists from the human to the animal. But I hope they understood,” Hedren told The Guardian.

Now 84, Hedren remains active in showbiz—for example, appearing in Cougartown (as herself) as recently as 2013.

But her role as an animal-rights activist and conservationist might well be Hedren’s most lasting legacy. For decades, her Roar Foundation and the animal sanctuary,Shambala Preserve, in California have advocated for  over 50 big (and not so big) cats, often dangerous—from lions and leopards to bobcats and servals so they can regain their physical and mental health and live out their lives in dignity —and she’s been honored with a host of humanitarian and conservation awards through the decades.

In 1971, LIFE photographer Michael Rougier spent time with Hedren; her teenage daughter,Melanie Griffith (from Hedren’s first marriage, to Peter Griffith), her then-husband, the agent and movie producer, Noel Marshall; and others at their home in California. Also in attendance: Neil, a 400-pound mature lion, who occasionally slept in the same bed as Griffith and, as these pictures attest, had the run of the house, from the kitchen to the living room to the swimming pool.

Hedren has since acknowledged that it was “stupid beyond belief” to put her family at risk by allowing an animal with “no conscience or remorse genes” to roam free. On that, at least, we can all agree—even if these pictures make Neil look like the world’s biggest pussycat.

The following photos taken at the house of actress Tippi Hedren in California, photographed by LIFE magazine during the early 1970s. Best-known for her role in Hitchcock’s The Birds, Tippi is also the mother of actress Melanie Griffith (Working Girl), who is the little girl you just saw lying in bed with a lion, and also above with her head in its mouth. RELIGION: Pope Francis Denies Islam Is Violent And...
CAPPADOCIA : Göreme National Park and the Rock Sit...
QUOTE: Falling In Love
Believe it or not: Zayn Malik says an ‘alien...