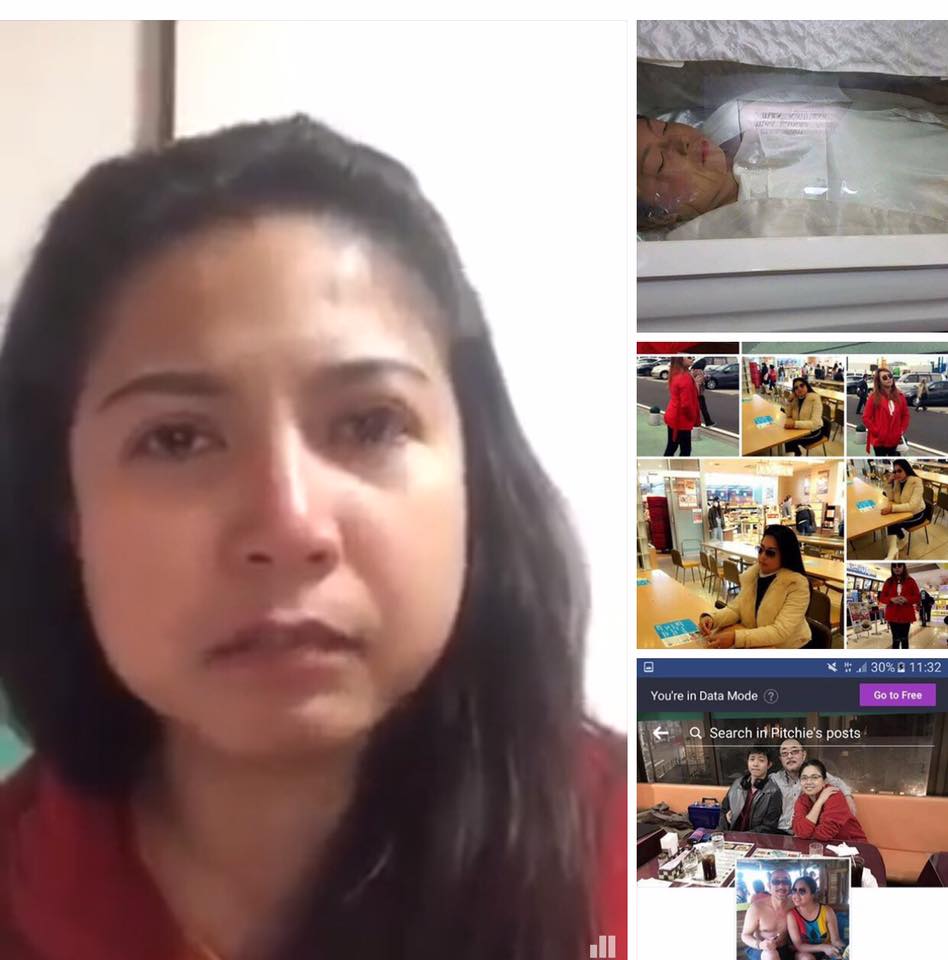 Netizens are crying out for justice after this woman allegedly took her own life while recording herself.

The seven-minute long video was shared by netizens and other Facebook pages such as DuterteToday and PARA SA BAYAN.

Pitchie Inoue | A confession of a RAPE victim before killing herself

Being sexually assaulted is definitely one of the most traumatic experiences that an individual can encounter. More than that, it’s all the more terrible if the woman is raped by none other than her own blood relatives, particularly her family.

Several  women, men and children are raped and molested happened everyday around the world. Some cases were given justice but most are not. Some victims committed suicide while many felt reporting would do little good so they just wanted to move on.

In many cultures the stigma associated with rape is extremely damaging to victims. In some Asian cultures, women are driven to suicide or are killed by family members in order to relieve the family of their shame (Heise et al. 1994).

Sadly, not all rapists are caught. And if ever they are caught, they are not given the punishment they deserve. This was the case for Pitchie Inoue, an OFW (Overseas Filipino Worker) in Japan.

According to Pitchie, her father, brother, uncle, and a family friend raped her when she was still in the Philippines. What pained her most was that her mother knew of the abuse, but chose to stay silent. Apparently, her family didn’t want any of their scandals to get out because they were too ashamed that they might be the laughingstock of the neighbourhood.

Though Pitchie was able to marry a man who accepted her past and formed a family with her, she was continuously haunted by her experience. One of her assailants even told her that if she wants to take her own life that she ‘do it while she was in Japan’.

To fulfill her family’s ‘wish’, she took a handful of pills and drank them all at once, while recording her suicide on her cellphone. The video was later shared on Facebook by user Jayson D delos Reyes, and has reached more than 2,500 shares as of this article’s writing.

Image Viral 4 Real .. An alleged picture of her in a coffin tells that she already committed suicide before the video went viral.

Their are a lot of stories circulating online. But this caught my attention. A suicide message is uploaded on Facebook. Pitchie Inoue is a OFW in Japan. She committed suicide cause she can handle the felling of being a rape and molested by her own family. According to the video(Pitchie) which circulate online, her father, brother, uncle, and a family friend rape and molested in different form.

She begins by saying: “I just want to say, I wish I had (another) way to prove myself.” She pauses. “I’m a rape victim.” She almost snorts and adds: “Questionable ‘yun sa kanila.”

“Minolestya ako ng tatay ko, minolestya… fininger ako ng kapatid kong pangalawa, panganay, na-rape ako ng tito ko,” (I was been molested by my father, molested… I was been fingered by my second brother, the eldest, I was been raped by my uncle) she says as a matter-of-fact. “Father’s side. And for you, brother dear.”

At this point, she changes her expression and it is obvious that she is disgusted. “Taong sira ulo na ‘di niya alam ang ginagawa niya. Tawagin mo ‘ko sa lahat ng bagay. Lahat ng mga pagkukulang ko…”(A crazy man who doesn’t know what he is doing. Call me anything. To all my shortcomings…)

“Natatakot na makipagtawanan? Katawa-tawa na tayo noon pa!” (Afraid of being laugh? We were been ridiculed even before!”)she continues. Although it is a bit incomprehensible, it is obvious that she wants to vent out against her rapists.

In the end, she cries: “All I want is justice, respeto!” The woman then shows the viewers that she has several different-colored pills in her hand. “By the way, that’s for you, kuya Joey!”

Before the video end she takes a lot of medicine. Drinking them all at once, overdosing her self and later kill her.

Then, she pops all of them into her mouth and then chugs them down with a bottle of water. Unfortunately, it doesn’t take long for her to swallow it all.

After drinking the pills, she ended the video by saying,“Walang kukuha sa anak ko kundi ako. Wala kayong makukuha kahit ano!” (Nobody will get my kid but me. You will get nothing!)

According to someone alleging to be a close friend of the victim named Jasmine Cunanan on Elen Constantino Yadan‘s Facebook page on June 6, 2017, the handful of pills she swallowed was not the cause of her demise. According to Cunanan, the victim survived the attempt caught on video, she claims that the video was originally uploaded on February 11, 2017. Apparently she lived for another 4 months until she was found dead on June 1, 2017; lying face down on her bed.  According to Cunanan, doctors say she died of pulmonary cardiac arrest.

In her Death Certificate, the cause of death is Ischemic Heart Disease.

However, either her death was due to overdose or pulmonary cardiac arrest, still the same. She was been molested and what hurt most is done by her own family.

JUSTICE SHOULD BE SERVE FOR PITCHIE!!! MAY SHE REST IN PEACE!!!