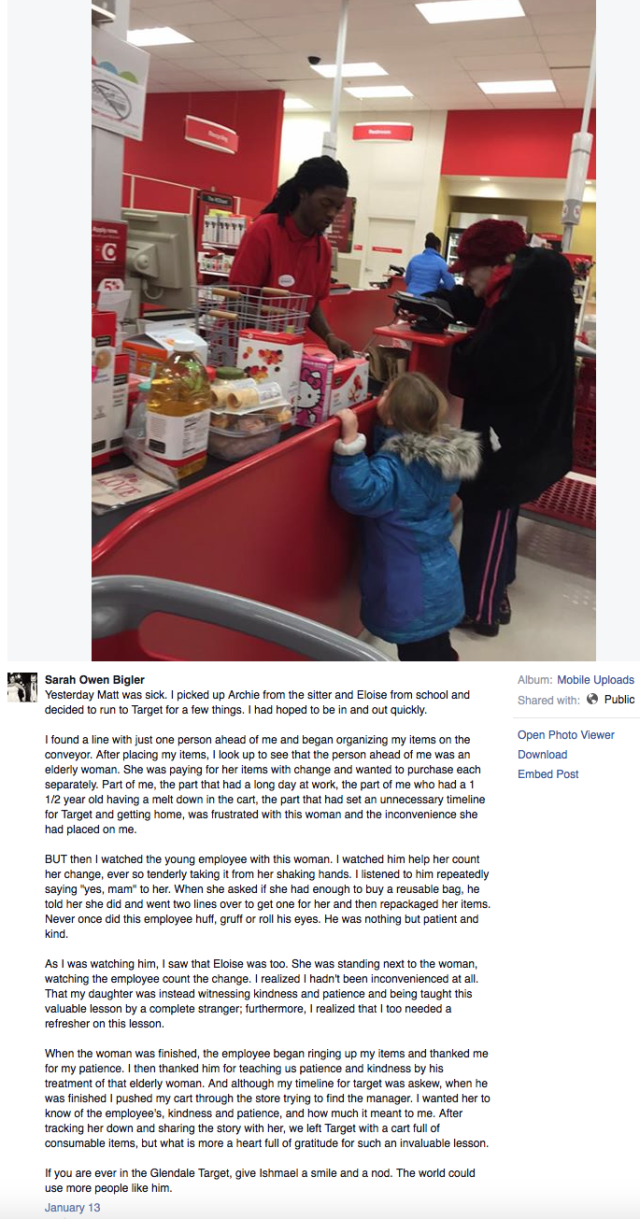 Touching kindness of teen Target cashier who patiently helped an elderly lady count out pennies to pay for all her items captures the hearts of thousands online.

This lesson in kindness can teach us all what it means to have sympathy for those around you. A snapshot of a cashier’s everyday patience recently made the rounds on the Internet, racking up shares and likes from people inspired by the importance of common day courtesy.

Sarah Bigler, 36, mother of two, was having an ordinary Tuesday evening. After a long day of work, stressed out and frazzled, she was waiting impatiently in a stalled line at a Glendale, California Target when suddenly she realized what was happening in front of her. “I was just irritated and frustrated and thinking of my long day, in this necessary timeline to get home and get the kids bathed… and then I stopped for a moment.”

Ishmael Gilbert, 19, a cashier at Target in Glendale, Indiana, has been praised online for his sweet treatment of an elderly woman at work Source dailymail.co.uk Image Nifymag

Ishmael Gilbert, the cashier at the register, was helping out the woman, an elderly woman who had to pay for her groceries in change. He patiently counted coin by coin without rushing the apologetic woman. Bigler was very impressed with the man’s kindness and patience.

“I watched him help her count her change, ever so tenderly taking it from her shaking hands,” she wrote. “I listened to him repeatedly saying ‘yes, mam’ to her.”

Bigler had many, many more complimentary words to say about the encounter. “When she asked if she had enough to buy a reusable bag, he told her she did and went two lines over to get one for her and then repackaged her items,” Bigler continued.

“Never once did this employee roll his eyes or make any outward signs of being at all annoyed or inconvenienced by the women.

Bigler also couldn’t help but notice that she wasn’t the sole witness of this kindness. Her daughter, Eloise, was watching this man’s every move, and she was learning all about respect, courtesy, as well as great customer service. Was she inconvenienced by having to wait a little longer? Not a chance. This was a teachable moment. “I thought, this stranger is teaching something I could never teach her,” Bigler also noted.

“I realized that I too needed a refresher on this lesson.”

By making the extra effort of taking a photo and posting it with her comments, Bigler went above and beyond what most people would do to get that lesson shared with as many people as possible.

“My Facebook page doesn’t do it justice, had I known it was going to go viral I would have tried to give it more justice,” Bigler told WXIN. After just a few days, the post had been shared by thousands.

He learned it from his mom.

Gilbert offered some humbling comments when interviewed—kind of what you might expect from a man with his kind of character, who said he learned how to treat others from his mom.

In response to his patience in helping the woman count out her coins, he said, “She kept telling me she’s sorry, and I kept telling her, ‘You’re fine.’” Sounding off: After witnessing Ishmael’s kind act, Sarah made sure to thank him for teaching her daughter a lesson and then looked in the store for a store manager to give the young man a glowing review SOURCE (dailymail.co.uk)

The virality of Bigler’s post is a well-deserved reward for Gilbert, giving a fine example of just who he is.

After the woman completed her transaction, Ishmael rang through Sarah’s items and thanked her for waiting so patiently. She, in turn, thanked him for his own extraordinary patience and, despite having initially been in a hurry, pushed her cart back in the store to find a manager and describing what she had witnessed. Popular guy: After the Facebook post was shared by thousands, Ishmael woke up the following day to text messages from ‘everyone’ telling him to check social media SOURCE Daily Mail

The next day she shared the full story online, closing her tale with: ‘If you are ever in the Glendale Target, give Ishmael a smile and a nod. The world could use more people like him.’ This picture, which recently went viral on Facebook, shows what it means to be kind and courteous in everyday life, especially to people who are struggling to make ends meet.

While the fame is exciting, Gilbert makes sure to note that he provides the same level of service to all his customers: “I treat everyone with the same respect, and I get it back in return.”

Ishmael Gilbert’s mother also caught wind of his day at work and was pleased to see her son had become an Internet star.

“I asked Ishmael how he felt about his story and what did he learn from this he said ‘I want people to know that I AM a young hard working father trying to provide for my daughter’,” Aimee Smith Gilbert wrote on Facebook.

Ishmael is not only thankful for all the appreciation he has received from the incident, the 19-year-old also hopes that he can make an appearance on The Ellen Show. Don’t we all?

How To Have A Gradient Lips
Ahmet Kaya – Öyle bir yerdeyimki ( I Am On S...
PEOPLE: The Shocking Coincidences That Led Fans To...
Travel: The Reason cabin crew ask you to open the ...