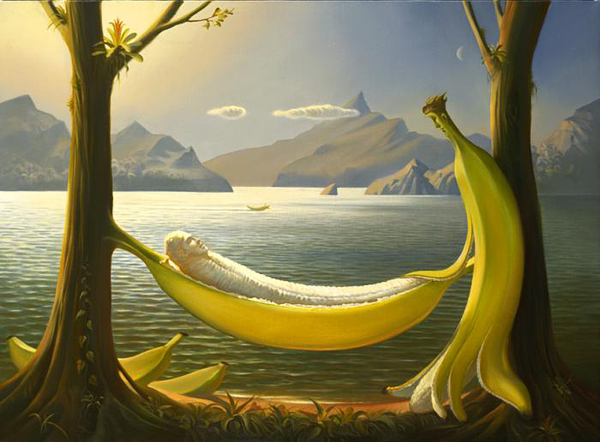 Vladimir Kush, Russian painter and sculptor, was born in Russia, in a one-story wooden house near the Moscow forest-park Sokolniki. At the age of seven Vladimir began to attend art school until late evening where he became acquainted with the works of great artists of the Renaissance, famous Impressionists and Modern Artists. 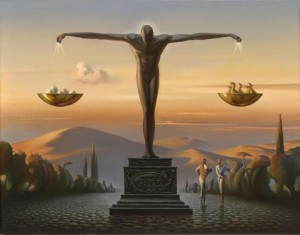 Vladimir entered the Moscow Higher Art and Craft School at age 17, but a year later he was conscripted. After six months of military training the unit commander thought it more appropriate to employ him exclusively for peaceful purposes, namely, painting propagandistic posters. After military service and graduating the Institute of Fine Arts, Vladimir painted portraits on Arbat Street to support his family during the hard times in Russia.
In the year 1987, Vladimir began to take part in exhibitions organized by the Union of Artists. At a show in Coburg, Germany in 1990, nearly all his displayed paintings sold and after closing the exhibition, he flew to Los Angeles where 20 of his works were exhibited and began his “American Odyssey”.

In Los Angeles, Kush worked in a small, rented home garage, but was unable to find a place to display his paintings. He earned money by drawing portraits on the Santa Monica pier and eventually was able to purchase a ticket to his “Promised Land”, Hawaii.
In 1993, a dealer from France noticed the originality of Kush’s work and organized an exhibition in Hong Kong. Success surpassed all expectations. In 1995, a new exhibition in Hong Kong at the Mandarin Fine Art Gallery brought more success. In 1997 he had a new start in the USA exhibiting in the galleries in Lahaina, Hawaii and in Seattle. In 2001 Kush opened his first gallery, Kush Fine Art in Lahaina, Hawaii. He now has 4 gallery locations in the USA with future plans to open more galleries around the world.

Travel: Sedlec Ossuary in the Czech Republic-- The Art OF Human Remains

Treatment: 10 Insects that were or are Used to Cu...
Inspiration: Leon Botha, Progeria Victim, South Af...
The Garden of Eden – Myth or Fact
Adorable Prince George at TWO

Treatment: 10 Insects that were or are Used to Cu...
Inspiration: Leon Botha, Progeria Victim, South Af...
The Garden of Eden – Myth or Fact
Adorable Prince George at TWO