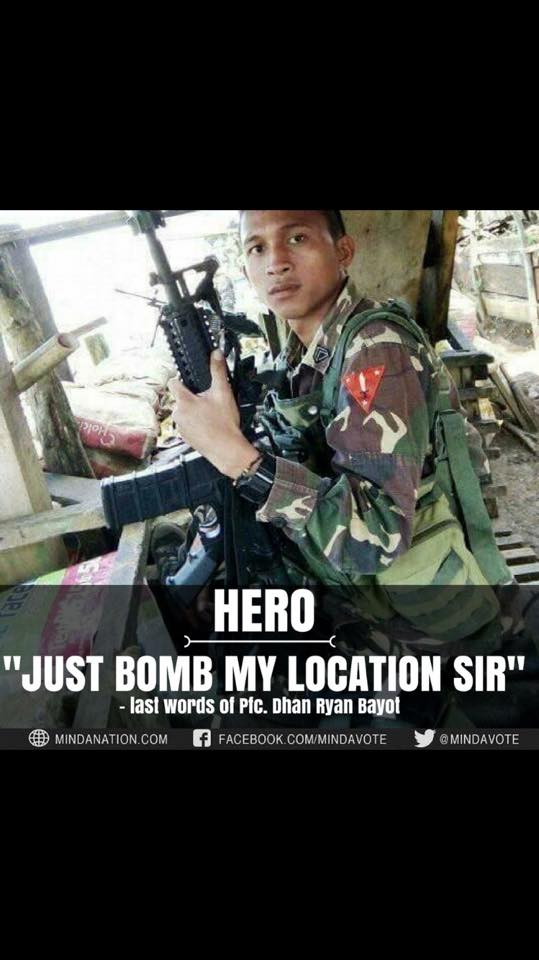 A different kind of Bayot 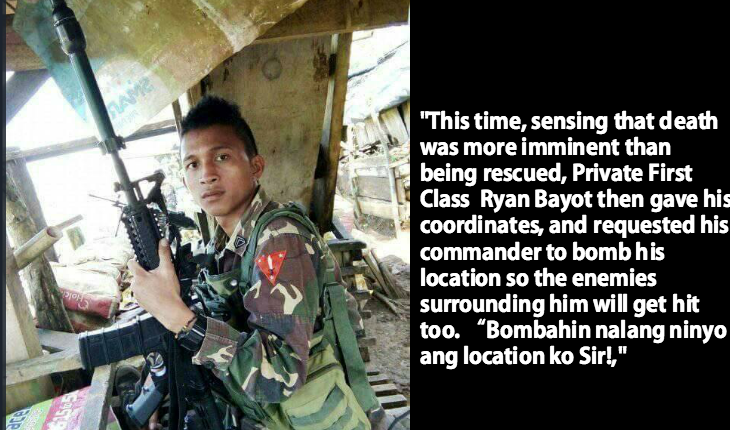 These were the last words of 24-year old Private First Class Dhan Ryan Bayot when he called his commanding officer before he succumbed to death in the hands of the Maute-ISIS terrorists.

Bayot’s team–consisting of 9 soldiers from the 51st Infantry Batallion—was stationed in a detachment in Barangay Lilod, Marawi City on n the 2nd day of the Marawi siege, May 24. They were dispatched to the said post upon the request of a town mayor for added security as his residence was just above the detachment.

Moments later, they were attacked. A survivor said that aside from the shots from both sides of the road, gunfire also came from the mayor’s house. Apparently, the mayor’s house was already overtaken by the terrorists or his bodyguards might have sympathized with the attackers. The soldiers cannot tell, they were too surprised that the volley of fire came from all directions.

Not long enough, five of his companions were dead. For some reason, three soldiers managed to escape and abandoned the post. (It was only learned later that the three were shot just the same, killing one and wounding the two). 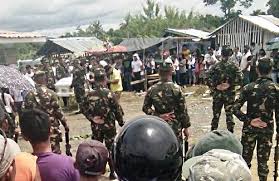 He was buried in his hometown in a simple yet meaningful ceremony. Source: Elite Readers

This time, sensing that death was more imminent than being rescued, he then gave his coordinates, and requested his commander to bomb his location so the enemies surrounding him will get hit too. “Bombahin nalang ninyo ang location ko Sir!,”(Just bomb my location Sir!) he told his commanding officer.

His dead body and of six of his comrades was retrieved on May 28—four days after they were killed.

One of the retrievers of his dead body was his father, Sgt. Larry Bayot of the Division Reconnaissance Company of the 1st Infantry Division. His father said that it took four units from different battalions of the Philippine Army to retrieve their bodies given the difficult terrain. He understands now why it was really hard to rescue his son. 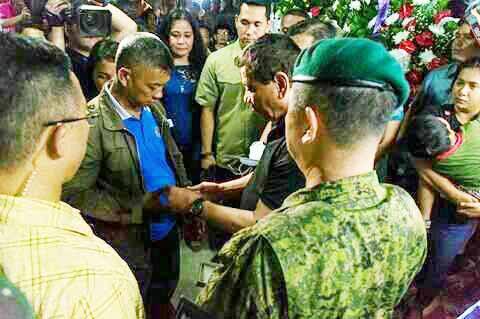 Surprisingly, the father saw no bullet wounds on his son’s body that might have caused his death. Instead, he saw his son’s heavily deformed face and a deep bolo cut around his neck. Presumably, when he ran out of bullets the terrorists might have taken turns of bashing his face before slashing his neck in an attempt to behead him.

Although pained so much for the dastardly manner of his son’s death, he never showed it. To a soldier, it’s always a ‘do-or-die-but never-question-why’ attitude.

The next day, the father brought his son’s body to bury him in the family’s hometown in Barangay Upper Pangi, Ipil, Zamboanga Sibugay. On June 2, a day after the burial, President Rodrigo Duterte went to his barangay to personally console him on his loss. 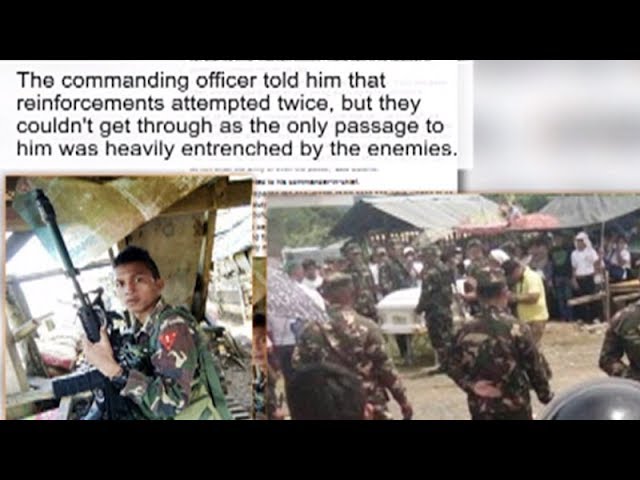 The president gave him the posthumous medal for his son, P250 thousand cash, and a pledge to fund for any young surviving family member’s education.

“Unsa pa man akong matabang nimo?” (What else can I be of help?) the President asked Sergeant Bayot. Bayot replied that his 18 year-old youngest son, who is the late PFC Ryan’s younger brother, wants to join the Army too. Maybe you can help him enlist in the army, Bayot told the president.

“No, not yet, he has to finish his college first, then after that maybe we can let him enter the army or even the police,” said Duterte.

The sergeant relented to his commander-in-chief.

Now, he is busy preparing the documents of his dead son while waiting to be called anytime for duty to the 1st infantry Division whose jurisdiction includes Marawi City. His younger children will be off to college.

Ironically, the word bayot in Visayan means gay.But for this particular family and for the neighbors who knew them in Upper Pangi, Ipil, the word now simply means valor and patriotism.*

Terrifying Aim: Meet The Woman Who Aims To Be The ...
Beautiful by Eminem
Terror of Love: Acid Wash
Hopes and Dreams: Dare to be Different (with 25 ph...

INDIA: The Strange Yet Fascinating Places in India