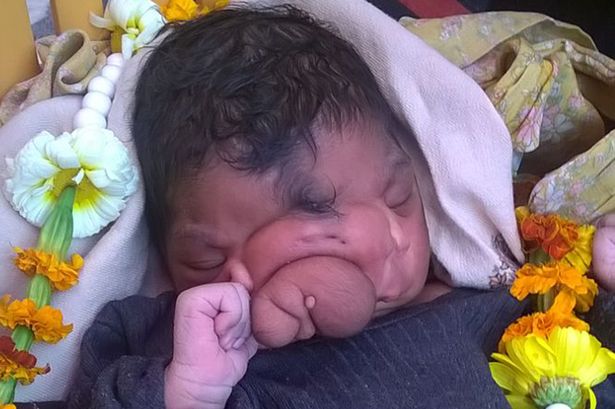 A baby girl is reportedly being worshipped like a god in India after she was born with a facial deformity resembling an elephant’s trunk.

Villagers near Aligarh, Uttar Pradesh, have flocked to see the ‘divine’ girl in the belief she is an incarnation of the elephant-headed god Ganesha.

They have continued despite doctors warning her condition may well be a genetic mutation, Asian News International reported.

The newborn’s aunt, named as Rajani, told the news agency: “My sister-in-law gave birth to a girl and her face looks exactly like Lord Ganesha.

“Everybody is saying she is an incarnation of the god.

“This is why whoever hears about her is coming here to get a glimpse of the baby and are making whatever offerings possible.”

The girl, who was reportedly born at 7am on Thursday, March 26, is said to be the fourth child in a so far ordinary and healthy family.

Her facial lump is between her eyes and appears to have divided her nose in two when the girl was still in the womb.

Doctors will examine the baby girl to find out the extent of her condition and whether they need to operate.

They have warned the condition could be a genetic mutation triggered by malnutrition and increased pollution, ANI reported.

A 2003 report by the environmental magazine Down to Earth said workers in Aligarh, an industrial zone, faced poor sewage works and ‘nightmarish working conditions’. 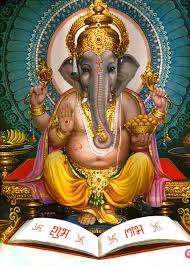 Ganesha is one of the best-known gods in Hinduism and is worshipped by millions as the deity of wisdom and intelligence. All computers are going to be wiped out in 2038… a...
How To Set Up a Budget
‘Feel’ Lyrics by Robbie Williams
Photography: The Power of Black and White 2