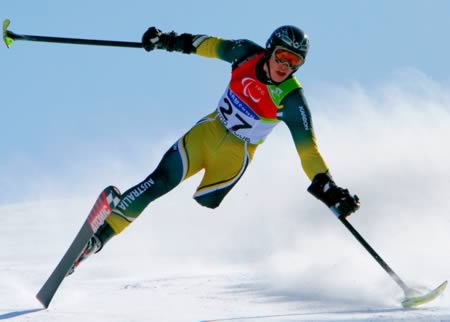 1. HUG HERR -The height of courage: Climber scales 200ft cliff despite having no legs (and one of his false limbs falls off halfway up)

Heroic Hugh Herr enjoys nothing more than scaling a cliff, even though both of his legs were amputated after a disastrous climbing expedition when he was a teenager. As if conquering a 200ft rock face wasn’t hard enough, one of his prosthetic legs fell off during his latest climb. However, he calmly waited for it to be roped back up to him before making it to the top. Mr Herr runs a lab making bionic legs at the Massachusetts Institute of Technology, and insists that artificial limbs are an advantage. An inspiring Oscar Pistorius moment: though he failed to qualify for the 400-meter Olympic final, the South African runner continues to be a role model for not only amputees but many others around the world.

This is an older photo, but the cute image of his “race” against a little girl with prosthetic legs like his just surfaced.

4. SCOTT SCHROEDER -What It’s Like: To Dive as a Double Amputee Soldier Scott Schroeder wears two prosthetic legs and a false arm following a devastating roadside bomb attack in Afghanistan, but that hasn’t stopped him from enjoying a spot of scuba diving.

The chief warrant officer has had special flippers attached to his legs so that he can explore undersea worlds once again. He lost his limbs seven months ago when an IED exploded beneath his transport vehicle. The week-long series of dives in the Florida Keys National Marine Sanctuary is part of a recreational therapy program. American Jessica Long, a 12-time Paralympic champion, will be the subject of a 20-minute feature “Long Way Home: The Jessica Long Story,” that will air within NBC’s Olympic coverage this weekend (22-23 February).

Long Way Home chronicles the story of the 21-year-old from a Baltimore, Maryland, suburb, who was born in Russia and adopted by American parents. The feature tracks Long’s journey from the States to Siberia – Baltimore to Bratsk – to meet her birth family.

A double-amputee and a Russian-born orphan, Long has grown up as two people simultaneously, a dedicated and determined young woman who has used that drive to become one of the most-decorated Paralympians and also someone who, from 13 months old at her adoption from a Russian orphanage, has longed to know who she really is.

The feature will tell the remarkable story of how she discovered her first family, and eventually embarked on a journey through a past she never knew.

Originally named Tatiana Olegovna Kirillova, Long retraces her adoption back to her orphanage in Irkutsk, Russia, and on to what would have been her hometown of Bratsk, deep in the heart of Siberia. It’s here that we see the overwhelming moment where she comes face-to-face for the first time, not only with her birth mother, but her biological father, brothers and sisters – the Russian family she had never met.

It’s an adventure that takes her more than 7,000 miles from the world and family she grew up knowing.

A production team from NBC Olympics accompanied Long on a three-day journey to reach the adoption centre in Irkutsk and the 18-hour train ride to Bratsk.

Born with fibular hemimelia, the lower part of Long’s legs were amputated when she was 18 months old. She learned to walk on prosthesis. Now a 17-time Paralympic medallist – including 12 gold medals – Long holds 13 world records and is a two-time US Paralympic Sports Woman of the Year. 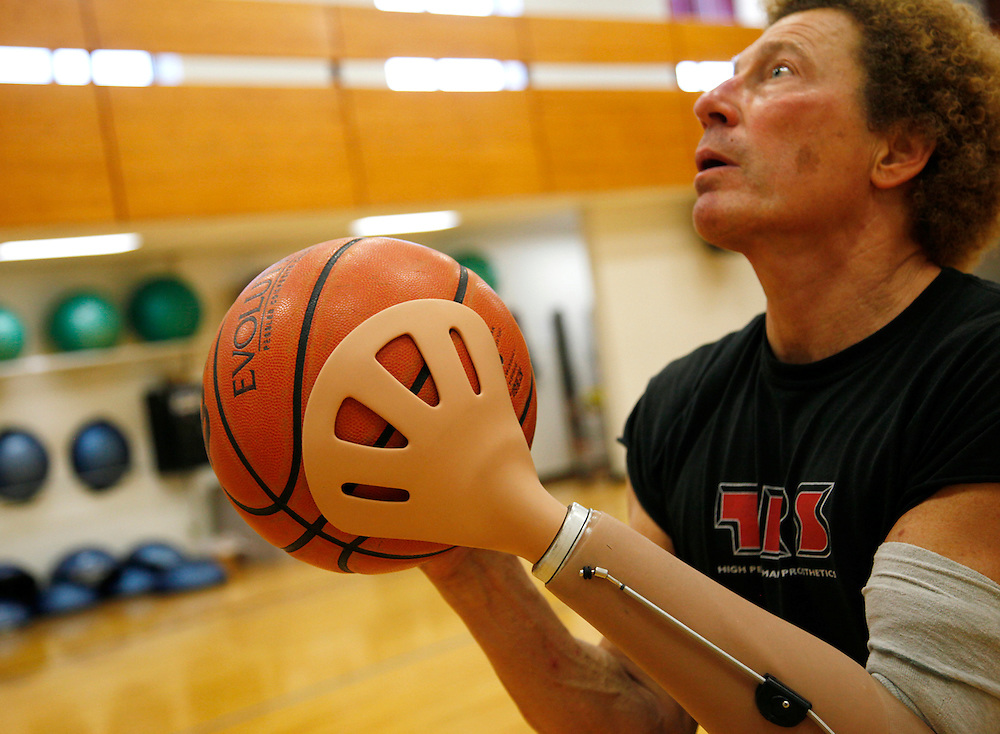 Bob Radocy of TRS Inc. shoots a basketball with a prosthetic hand designed for the sport at a gym in Boulder, Colorado August 21, 2009. Radocy designs and builds prosthetic attachments that allow amputee athletes to participate in multiple sports.

7. AIMEE MULINS – Worth Your Time

Aimee Mullins is an athlete, model/actress, and leader by example. The unfathomable great challenge of losing both her legs at the age of 1 was the adversity that gave her the opportunity to lead such an extraordinary life. In my effort to provide content that helps support people who want to lead a healthier, happier, and ageless lifestyle I came across the story of Aimee Mullins. Through the years, it has become apparent that there are a few life-skills that need to be mastered in order to achieve a healthier, happier, and ageless lifestyle. One determining factor seems to be the ability to overcome your own personal obstacles. Aimee Mullins shows us that her ability to overcome her physical obstacle was just a switch in perspective. She did not perceive herself as incomplete or incapable as others may have perceived her to be. She saw herself as quite the opposite. How do you see yourself? Capable! OR Incapable? Jeremy Campbell wanted to be the first disabled athlete to throw a discus 60 meters in competition. He’d done it many times in training, but he wanted it on the record books.
Campbell first hit the mark in April in California. Then, at the BT Paralympic World Cup in Manchester, England, his throw of 62.18 meters on May 22nd set a daunting new world record — seven meters longer than his gold medal throw at the 2008 Beijing Paralympics. Now, Campbell is aiming for gold in the discus at the 2012 London games. “I hope I have inspired people,” Cartwright told the Herald Sun last night. “I get so many great messages from people saying that I am the reason they’ve changed the outlook on their lives.

“That is why I love doing what I’m doing. I know there was a time when I felt the same way, that my life was over. But to know that people can think differently because of what I’ve achieved is pretty special.”

Cartwright claimed silver in the women’s 100m T42 sprint, despite earlier concerns she had lost confidence in the lead-up to the final.

She admitted to feeling uneasy after several competitors set faster qualifying times but she crossed the line in a personal best time of 16.14 seconds.

In 1994, French steelworker Philippie Croizon was working on a metal ladder when he suffered a horrifying electric shock. Despite their best efforts, doctors were forced to amputate all his limbs. While recovering in his hospital bed, he saw a show on television about a woman swimming across the the English Channel. The program lifted him out of the depression he’d suffered since the incident, and he soon began training in earnest. In September of 2010, Philippe plunged into the Channel off the coast of Kent, England. In under 14 hours, he swam 33.8 kilometers (21 mi), arriving at Cap Gris Nez, France, and becoming the first quadruple amputee ever to swim the English Channel. In the years since, he has completed similar swimming challenges around the world. Croizon made headlines again in August 2013, when thieves made off with his high-tech, $30,000 wheelchair. After he made a public plea, the chair was returned by a man who claimed he’d merely taken it for “safekeeping.

Balochistan and Some Amazing Photos of Balochistan
T.I. & Young Thug – Off-Set [Official A...
How To Have A Gradient Lips
HEALTH: Is Energy Drink Good or Bad For Health?

Stonehenge, The Pyramids and Ancient People Moving...
Hand Accupressure For Lower Back Pain And Sciatica
MUSIC: True Colours by Cyndi Lauper
HEALTH EDUCATION: A SIMPLE AND ESSENTIAL GUIDE TO ...

Stonehenge, The Pyramids and Ancient People Moving...
Hand Accupressure For Lower Back Pain And Sciatica
MUSIC: True Colours by Cyndi Lauper
HEALTH EDUCATION: A SIMPLE AND ESSENTIAL GUIDE TO ...