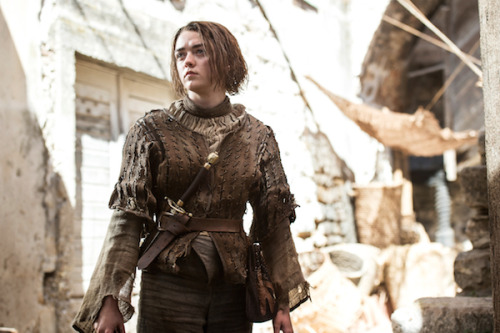 Have you ever watched Game of Thrones and asked yourself: Where do they get all those wonderful toys?

It’s all thanks to the series’ weapons master Tommy Dunne, who is in charge of every sword, shield, crossbow, arrow, dagger and whip on the show.

1) Jaime Lannister is the best swordsman on the show

“Nikolai Coster-Waldaj’s aptitude now and skill level is far beyond what a normal actor would be. I find that Nikolai has it all: He’s got the presence, he’s got the looks, he’s got the action as well with the sword.”

2) The characters’ personae influence the design of their weapons

“[For example], Arya and Needle. Seven years ago, Maisie Williams was a petite girl.  [So] you knew you had to make a smaller sword, very fine, very feminine, knowing that she had to use it as a young kid, and not make it too barbaric.

With Brienne, it was totally the opposite. Her sword was made for Jaime because it was a gift from his father, she was never meant to get it. “

“For the Battle of Blackwater Bay, we’re dealing with a lot of extras, logistics, stunts and actors, and it’s a night shoot with flaming arrows and normal arrows. But you can get away with a little bit more when you got a big crowd fighting each other, because you won’t catch that person who made a mistake, or fell over.

4) Dornish weapons are all about snakes

“We ran with the theme of a snake. For Tyene and her two daggers, they’re intertwining snakes wrapped around each other to create a crossguard and a pommel. [And Nym’s whip] is supposed to be the tongue of the snake.”

5) He wants to make an actual Iron Throne

“This is something that I wanted to do from the very start. A lot of swords that I have were used in the mould and the model-making of the swords for the throne. But I personally wanted to make a real one of real swords. The price is silly, but I will do it eventually.”

The new season of Game of Thrones is currently showing on HBO (StarHub TV Ch 601), every Monday at 9am, with a repeat encore at 9pm.

10 Tips on How To Get Rid Of Colds and Blocked Nos...
ISRAEL, JERUSALEM: CASE OF VIRGINAL CONCEPTION BAF...
WATERFALLS by TLC
Child Bride (Cocorosie Lyrics)

10 Tips on How To Get Rid Of Colds and Blocked Nos...
ISRAEL, JERUSALEM: CASE OF VIRGINAL CONCEPTION BAF...
WATERFALLS by TLC
Child Bride (Cocorosie Lyrics)