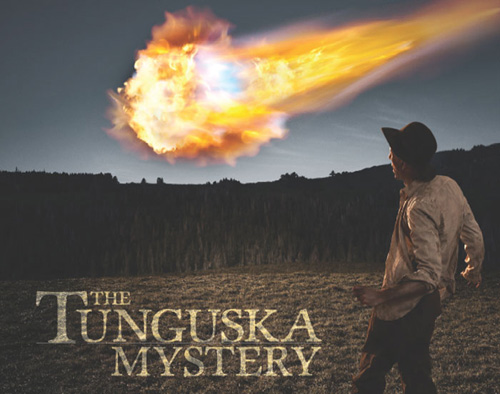 At 7:17am on 30 June 1908, an immense explosion tore through the forest of central Siberia.

A full century after the mysterious Tunguska explosion in Siberia leveled an area nearly the size of Tokyo, debate continues over what caused it.

Many questions remain as to what crashed into the Earth from above — how big it was and what it was made of. Some question whether it even came from space at all, or whether it erupted from the ground instead.

Some 80 million trees were flattened over an area of 2,000 square km (800 square miles) near the Tunguska River. Leonid Kulik found vast areas of forest had been levelled

The Russian mineralogist Leonid Kulik visited the region in 1921, interviewed local eyewitnesses and soon realised that a meteorite must have been the cause.

He persuaded the Russian authorities to fund an expedition to the region in 1927, during which he was able to explore the vast zones of fallen trees.

An aerial survey was carried out in 1938, revealing how the flattened trees were angled away from the epicentre of the explosion over a 50km-wide zone which formed a butterfly shape.

Trees at the epicentre were charred and stripped of their branches and bark, but were left standing, which would lead to them being coined “telegraph poles”.

The blast was 1,000 times more powerful than the atomic bombs dropped on Hiroshima and Nagasaki and generated a shock wave that knocked people to the ground 60km from the epicentre.

The cause was an asteroid or comet just a few tens of metres across which detonated 5-10km above the ground, 107 years ago.

But Dr Mark Bailey, director of the Armagh Observatory in Northern Ireland, thinks some comets could contain chunks of tough material that could survive the plunge through Earth’s atmosphere.

Eyewitnesses recalled a brilliant fireball resembling a “flying star” ploughing across the cloudless June sky at an oblique angle.

The plume of hot dust trailing the fireball gave rise to descriptions of a “pillar of fire”, which was quickly replaced by a giant cloud of black smoke rising over the horizon.

“The sky split in two and fire appeared high and wide over the forest. The split in the sky grew larger, and the entire northern side was covered with fire,” one local remembered.

“At that moment I became so hot that I couldn’t bear it, as if my shirt was on fire… I wanted to tear off my shirt and throw it down, but then the sky slammed shut. A strong thump sounded, and I was thrown a few yards.”

This eyewitness was lucky, but an elderly hunter who was much closer to the explosion died after being flung against a tree by the blast. That the airburst did not cause more casualties was in large part due to the remoteness of the area.

Eyewitnesses as far off as Great Britain reported that the skies lit up like the Fourth of July, and since an event as awesome as the Tunguska explosion had flooded the human imagination with countless questions, thousands of hypotheses have been offered surrounding this phenomenon. Suspected culprits ranged from meteorites and natural gas to a natural H-bomb explosion, antimatter, black holes, aliens and  famed inventor Nikola Tesla’s “death ray.”

Instead of a cause from above, in the last decade some researchers have suggested the Tunguska explosion actually came from below. Astrophysicist Wolfgang Kundt at the University of Bonn in Germany and others have suggested that an eruption of natural gas from kimberlite, a kind of volcanic rock best known for sometimes holding diamonds, could be to blame.

“It would have come from the molten earth, some 3,000 kilometers deep (1,864 miles),” Kundt said. “The natural gas would be stored as a fluid that deep, and when it reaches the surface it would become a gas and expand by a factor of thousand in volume, for a huge explosion.”

For support, he cited the pattern the trees fell in, as well as chemical anomalies.

Wilder theories have been bandied about over the years regarding what caused the Tunguska explosion, including:

All the speculation concerning Tunguska is to be expected, physicist Mark Boslough at Sandia National Laboratory in Albuquerque, N.M.,said.

“Lots of theories are going to pop up — it’s like a crime scene, and everyone wants to have a hand in solving the mystery,” he commented. “It’s fun to speculate.”

Travel: Hotel Galéria Spirit (Bratislava, Slovakia), One of the Craziest and most beautiful building

Health: Drinking A Glass of Milk With Honey A Day ...
T.I. & Young Thug – Off-Set [Official A...
Russian Roulette by Rihanna
How to Wear Makeup With Dry Skin

Health: Drinking A Glass of Milk With Honey A Day ...
T.I. & Young Thug – Off-Set [Official A...
Russian Roulette by Rihanna
How to Wear Makeup With Dry Skin