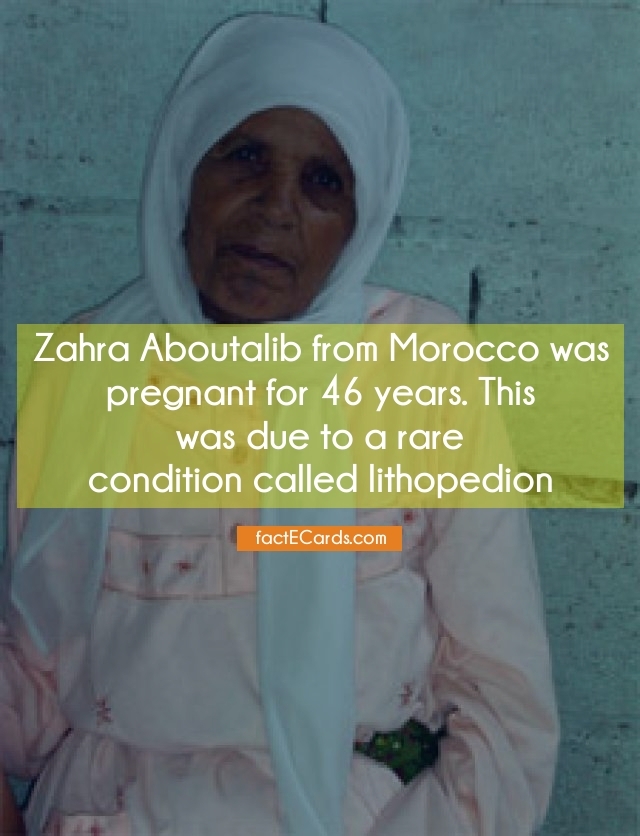 A Women Who Gave Birth To A Mummy

It may sound unbelievable to you but its true, its very rare fewer than 300 cases have been noted in 400 years of medical literature.

In 1955 , in a small village just outside Casablanca, a 26 year old woman named Zahra Aboutalib was rushed to the hospital to deliver her first baby after an excruciating 48 hour of labor, she still could not deliver the baby. Doctor told her that she had to undergo a caesarean section. On the ward, Zahra saw a woman in terrible pain died in child-birth.  Terrified, Zahra was urged to flee the hospital and hide in her home.

In the days that followed, Zahra continued to suffer excruciating labour pains but the baby remained resolutely in her wombs. After a few more days the pain ceased and the baby stopped moving.

In Moroccan culture, it is believed that a baby can sleep inside the mother to protect her honour. Zahra believed this myth and put the pregnancy out of her mind. She adopted three children and in due course they made her a grandmother.

Many years later when Zahra Aboutalib was 75 years old, the pains suddenly returned. Her son being concerned for his mother’s well-being wanted her to see a specialist. For this they had to travel to Rabat where they saw Professor Taibi Ouazzani. He suspected the protruding belly was being caused by an ovarian tumour and arranged for her to have an ultra-sound scan. This revealed a large mass that he could not identify.

He referred Zahra to a specialist radiographer for a second opinion. He could see it was a calcified structure of some sort, but it took a detailed MRI scan to reveal that it was the baby Zahra had conceived 46 years earlier.

Zahra Aboutalib had an ectopic pregnancy where the egg had implanted in the fallopian tube. The foetus that developed, burst out of the fallopian tube and continued to develop in the abdominal cavity. It survived by attaching it’s placenta to vital organs around her stomach.

Professor Ouazzania was faced with a difficult decision when deciding if it would be safe to try and remove the foetus. The foetus weighed 7lb and measured 42cm in length.

When they operated they discovered that the foetus had calcified and was a hard, solid lump. It was, essentially, a stone-baby. More concerning was the fact that it had fused with her abdominal wall and vital organs.

After nearly 4 hours the surgeons manage to remove the calcified foetus from Zahra and the operation is hailed a success.

In an ectopic pregnancy, if the dead foetus is too large to be re-absorbed by the mother’s body it becomes a foreign body to the mother’s immune system. To protect itself from possible infection the mother’s body will encase the foetus in a calciferous substance as the tissues die and dehydrate.

As the calciferous wall builds up, the foetus is gradually mummified becoming a lithopedion or stone baby.

CREDITS: All of the above information came from the UK Channel 5 “Extraordinary People” documentary series

Doctors in a small Chilean town have discovered a calcified fetus in an elderly woman’s uterus who told them she’d never realized she got pregnant.

Estela Melendez, 92, from La Boca, Chile, says that she’s had a lump on her belly for decades, but had no idea that she was carrying a fetus.

According to the doctors, however, it has been in her uterus for more than six decades. The fetus has calcified over time and poses no health risk to Melendez.

Estela Melendez, 91, (pictured) discovered that she has carried a fetus for over 60 years.

It was not until Melendez recently suffered a fall that the doctors noticed something on her X-ray which caused concern.

Then a second X-ray was ordered which showed that the mass the doctors were looking at was not to be a tumor, but a fetus.

The news came as quite a shock to Melendez, especially considering that she and her husband were unable to have children.

Doctors briefly considered surgery to remove the fetus but decided that operating on a 91-year-old patient was riskier than leaving it as it is.

Melendez says that it hurts sometimes, but it’s usually nothing more than a slight discomfort.

The lump on her belly, however, does remind Melendez of her husband and their unfulfilled dream of having a baby all those years ago.