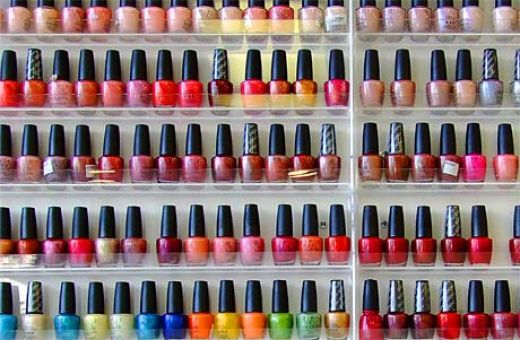 Before you go get a pedicure and flaunt your toes, Have you ever stopped to think about how it all began?

Here is a history of the paint that we have been adorning our nails with for thousands of years.

Even though examples of nail polish can be found in many ancient civilizations, it was the modern times when these cosmetic products reached its popularity. Empowered by the incredible advances of the industrial revolution and new abilities of modern chemist, nail polish emerged as one socially acceptable cosmetic product that was accepted by female population in the western hemisphere. Nail care was always important part of high fashion in modern times, but it was in late 17th century when first portraits with shiny nails started appearing. From that point on, nail care and accompanying cosmetic products started trickling down to the general population, becoming widely accepted during the Victorian age.

The concept of the manicure began in India well over 5,000 years ago with the use of henna as a nail paint.  This practice spread and was adopted by different cultures.  It is believed that the people of southern Babylonia took it a step-further around 4,000 BC and turned to solid gold to achieve the perfect manicure. Very chic.

In 3000 BC , nail polish was created in China where it was used by ruling class to distinguish themselves from the general population. The ingredients included beeswax, egg whites, gelatin, and vegetable dyes.   The desired shades were created by adding rose, orchid and impatiens petals.  It wasn’t an easy process and the nails had to be soaked in this mixture for a few hours for the color to set.   According to a 15th century Ming manuscript the colors used most often were varying shades of red and black. Popular colors were of metallic nature and they symbolized power and wealth, such as silver and gold. During the Chou Dynasty (circa 600 BC), gold and silver dust was used to create the colors worn by nobility.   The nail was also reportedly inlaid with precious stones and complex cloisonné designs.   It seems that nail color was strictly reserved for royalty in those days. One difference between China and other ancient civilizations that used nail polish was that this cosmetic product was not allowed to be used by general population. Several reports survived of public execution of common people who were caught with colored nails still survived today. 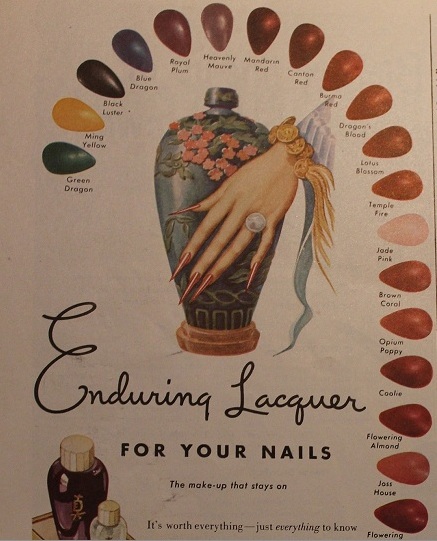 In Ancient Egypt, nail polish was even used to signify class rankings: The lower class often wore nude and light colors, while high society painted their nails red. Nefertiti and Cleopatra are remembered, among other things, as two of the most beautiful women of their time.   It is no surprise, then, that they were the first to make something as iconic as red nail polish famous!  During their respective reigns, societal hierarchy was indicated by the specific color worn.  The stronger the shade of red, the more power the person possessed.(No wonder red manis are so iconic!)

Although the practice likely existed earlier, sources suggest that Nefertiti, Queen of  Egypt (14th century BC) colored her fingernails a ruby-red color.  Nefertiti and her royal court would use henna (and sometimes even blood!) to color their nails.  Vampy.

Cleopatra, the last pharaoh of Ancient Egypt, continued this trend into the first century BC.  Unlike Nefertiti, it is believed she favored a striking crimson shade.  During her reign women of lower rank were permitted only pale colors as red was reserved for royalty alone.

This fascination with red polish remained constant throughout history and still continues today.

As with many other cosmetic products, nail polish disappeared from the European fashion after the fall of Roman Empire. It was only after the arrival of renaissance and the new trade connection with the Middle East and India that European aristocracy gain access to the nail polish. As the centuries went, nail polish and manicures became more and more commonplace, finally becoming commonplace in France during late 18th century.

By the turn of 19th century nail polish and coloring became more common among general population in France, England, Italy and United States, but it was in the early 20th century when nail polish became truly popular, with manicure establishments appearing in France at great numbers (especially in 1920s and 30s).

Years later, many people turned to oils, powders, and pastes to tint their nails. We can only imagine that these products, much like lipstick, tended to stain a lot and weren’t nearly as long-lasting or durable as modern nail polish as we know it.

So, how did nail polish get to where it is today? It has a lot to do with advancements in paint. Specifically, car paint. In the early 1900s, companies like Cutex and Revlon modified the formula of paint used in the automobile industry to create a varnish suitable for use on nails.

Flash forward to 1981, when Essie Weingarten debuted a collection of 12 unusual nail polish shades and changed the industry forever. Three of those shades (Blanc, Bordeaux, and Baby’s Breath) might still sound familiar, because they’re still popular colors being produced as part of the line. It’s hard to imagine now that white, pale pink, and wine-colored nail polishes were unusual even in the ’80s, but the rainbow spectrum of shades we enjoy today is a fairly new development.

In 1983, Joan Rivers (then a host of the Tonight Show) mentioned her nail polish on air (it was Essie’s Jelly Apple, a bright red shade). This moment was one of the first celebrity endorsements of a major nail polishbrand, and it skyrocketed Essie to public fame. Queen Elizabeth only wore Essie’s iconic Ballet Slippers shade, to give you an idea of how quickly it became the first name in nail polish.

Some Facts about nail polish:

Circa 1500: The Inca’s are credited with the invention of nail art.  You didn’t think that began in the 1990s did you?! It is believed that the Inca decorated their fingertips with images of eagles.  Calling Sally Hanson: new nail strip idea?

The invention of the car spurred the creation of the first modern-day nail polish.
Inspired by automobile paint, a completely colorless version was introduced in 1916.Revlon became the first established nail polish brand in 1932 when they released a cream color. The catalyst for the colored nail lacquer we all know and love was the 1920 creation of high-gloss automobile paints.

Essie currently sells 311 colors of nail polish, not including nail decals or specialty base and top coats.
You can even buy them in vending machines in airports and malls around the country.

Acrylic nails were introduced in 1978.
And they were invented by a dentist. Dr. Fred Slack Jr. was working in a dental laboratory in 1957 when he accidentally cut his thumb nail. Using aluminum foil and dental acrylic, he created a platform to fix the nail, and soon patented the first nail form.

In 1934, a bottle of Cutex nail polish cost 35 cents.
It was only available in three shades of red.

The most expensive nail polish costs $250,000.
Nope, that’s not a typo. The color, Black Diamond King, is made with 267 carats worth of black diamonds.

Actress Rita Hayworth popularized red nail polish.
After the introduction of Technicolor, Rita’s bold nails launched a polish movement. Much later, Uma Thurman would start a new trend of vamp-colored nails, thanks to her hit role in Pulp Fiction.

The introduction of Technicolor in 1922 affected more than just the film industry.  Shades of gray became a thing of the past and moviegoers were able to see everything in color.  The actors and actresses.  The sets.  The clothing.  The make-up.  As they “oohed and aahed” over this amazing change in cinema, women were suddenly treated to a spectacular sight – Rita Hayworth’s red lips and nails!

Opened bottles of nail polish only last about two years.
Unopened bottles can last indefinitely. But once you twist the cap off for the first time, certain ingredients evaporate, which changes the formula and consistency of your polish.

Some nail polishes have food in them.
Well, food extract that is. Nails Inc. recently launched a brand of nail polish with kale, which they claim will smooth and brighten nails. Londontown Lakur’s formula includes garlic to strengthen and harden nails, while others have cucumber that allegedly prevents splitting.

You shouldn’t throw your nail polish away.
The EPA considers nail polish a household hazardous waste so you should technically toss your unused bottles in a hazardous waste facility. (However, even the EPA says it’s impossible to regulate every household, so there is an exemption to waste generated by normal household activities.)

Storing nail polish in the bathroom is a big no-no.
And contrary to some reports, you shouldn’t put polish in the fridge either. The chill will cause the polish to crystalize, which breaks down the formula. Instead, keep polish in a dry, room temperature space without direct contact to sunlight.

Painting your nails is prohibited on airplanes.
One woman was even arrested for painting her nails on a flight. She did also use profane language and refuse to stop, but overall, most airlines frown upon nail lacquer in the sky.

Neon nail polish is technically illegal.
Or at least the FDA hasn’t approved them yet. Certain colorants used to create neon and glow-in-the-dark polishes are not allowed, but that doesn’t mean you won’t find them on beauty shelves. Many companies like OPI use formulas with FDA-approved coloring, while your other favorite neon polishes are imported.

You can use nail polish to fix a run in your tights, thread a needle, and more.
Lacquer isn’t strictly for your fingers and toes!

Today nail polish has become a superstar by its own right.  There are too many colors, finishes, textures, formulas and methods to count. Nail polish can be found in every possible combination of color and opacity. Black nail polish which is today popular in the Goth, Punk, Emo and Heavy Metal subcultures were not first introduced with them, but in 1930s during the post Art-Deco era.

Since then, there have really been only two major advancements in nail polish categories:

1. The addition of blues, greens, and other pastel shades.

Hard Candy and Urban Decay gained popularity in the ’90s for their unexpected nail colors. Suddenly, everyone was wearing mint green and sky blue–colors we previously hadn’t seen much of on nails at all.

2. The creation of gel and other long-wearing formulas.

From OPI to Shellac and everything in between, the creation of “gel” polish formulas that cure and harden by the time you leave the salon were revolutionary. They changed the way women approached their manicures, giving us zero dry time and the freedom to go on vacation without worrying about our nail polish chipping.

RELIGION: ‘Is it permissible for Muslims to celebr...
Love Of My Life Lyrics by Declan Galbraith and by...
Philippine Medicinal Herbs: Aratiles / Muntingia ...
PEOPLE: American And Filipino Female Celebrities W...

Photography: Amazing Sculptures and Statues From A...
CURL JUNG: The Life Cycle and Wisdom Of The Dreams
Travel: Beauty In The Dark (Photos of Nights Aroun...
Woman, 24, suffers from 50 orgasms a DAY due to ra...

Photography: Amazing Sculptures and Statues From A...
CURL JUNG: The Life Cycle and Wisdom Of The Dreams
Travel: Beauty In The Dark (Photos of Nights Aroun...
Woman, 24, suffers from 50 orgasms a DAY due to ra...