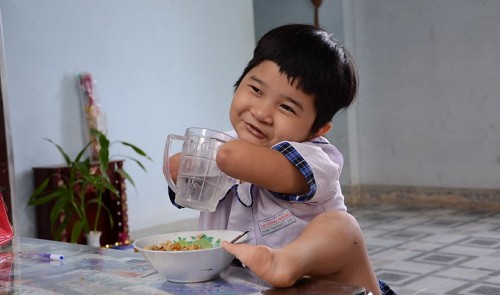 Nguyen Hoai Thuong is a seven-year-old child who was born without arms and legs due to Agent Orange exposure. Despite her unfortunate circumstances, Thuong still smiles as a way to keep her hopes up.

Hoai Thuong, who also has the affectionate nickname of “penguin,” lives in the outlying district of Cu Chi in Ho Chi Minh City, one of Vietnam’s most well-known sites with links to many historical events during the war.

She was born without arms and legs as a consequence of Agent Orange, one of the herbicides and defoliants used by the U.S. military as part of its herbicidal warfare program during the Vietnam War from 1961 to 1971.

Tran Thi Cam Giang, the mother, initially cried and even thought about committing suicide with her daughter after seeing Thuong’s disabled body.

Seven years have passed and she now feels lucky for having remained strong during that desperate moment.

Giang told Tuoi Tre newspaper that she and her husband, a factory worker living in a wooden house  in Ho Chi Minh City, still face many difficulties, especially after the birth of Thuong as their second child,but their daughter, Nguyen Hoai Thuong, has taught them to always be happy.

With a small amount of money from selling lottery tickets every day, Giang takes the bus to bring Thuong to a physiotherapy center in District 3, tens of kilometers away from Cu Chi, hoping to cure her daughter.

At the age of four, Thuong can manage almost every basic need in her life, including eating, brushing her teeth, getting dressed and arranging her books and things.

This year, Thuong enters second grade. The little girl uses a fake hand to help her write and use acalculator. She also has a small four-wheeled table which helps her move around.

However, Thuong still hopes that she can walk with her legs some day.

This summer, the Vietnam Association of Victims ofAgent Orange recently provided support to give her prosthetic legs.

After over one month of training, Thuong can walk for five or six steps. The doctor said her legs are bent and need an operation.

“We are running out of money. I stop selling lotterytickets to take Thuong to school and only sell jackfruit to make a little money,” Giang said. 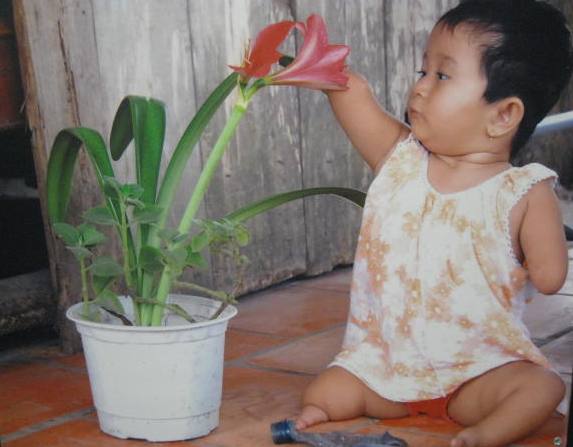 Thuong is the one who ladles rice during her family’s meals. Photo: Tuoi Tre.

Nguyen Hoai Thuong smiles happily with her friends after school. Having many friends is such an amazing thing. Photo: Tuoi Tre.

Nguyen Hoai Thuong has to exert a lot of effort in class due to her disability.The pen is placed in a hole in her prosthetic arm.  Photo: Tuoi Tre.

The small girl is seen sitting on a chair in class. Photo: Tuoi Tre.

The girl often wins other people’ affection thanks to her loveliness. Photo: Tuoi Tre.

The process of fitting the prosthetic legs is often painful. Photo: Tuoi Tre. 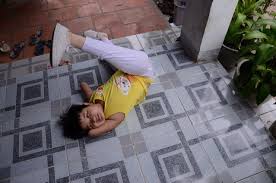 Tran Thi Cam Giang, Thuong’s mother, teaches her to walk. The seven-year-old girl has to follow a strict timetable every day, in which she goes to school in the morning, learns to walk from 2:00 pm to 4:30 pm, and studies in the evening.(  Tuoi Tre) 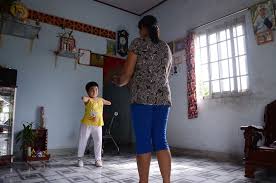 The little “penguin” often plays and even talks to the small bird at her home. Photo: Tuoi Tre.

NATURE: The Beauty of Aurora Borealis and All Abou...
Spring: The First Day Of Seasons
Westminter, London: Houses of Parliament Terror At...
ENTERTAINMENT: Shirley Temple (Black) Would Always...

Little girl with big appetite takes social media b...
Pictures of Incredible Bizarre Border Lines Betwee...
“The Paradise lies beneath the feet of your ...
Get Rid of the Dull Skin: 37 Herbal Tips to Gain G...

Little girl with big appetite takes social media b...
Pictures of Incredible Bizarre Border Lines Betwee...
“The Paradise lies beneath the feet of your ...
Get Rid of the Dull Skin: 37 Herbal Tips to Gain G...