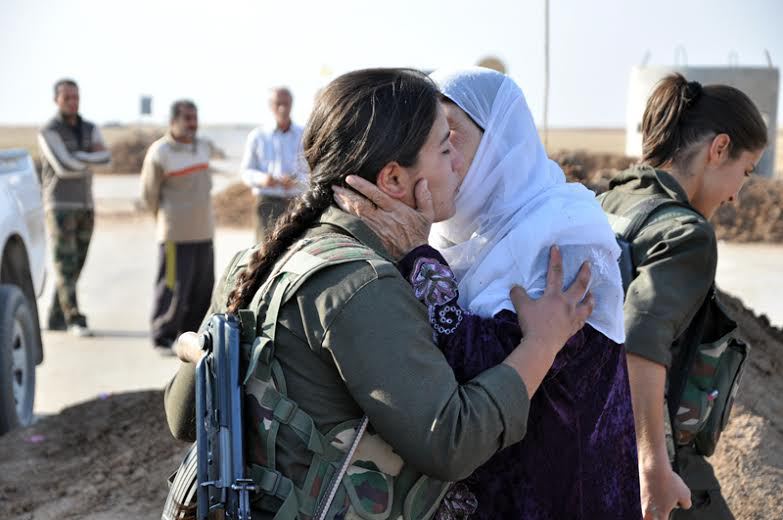 I am fine mom. Yesterday we celebrated my 19th birthday.

My friend Azad (means freedom in Kurdish) sang a beautiful song about mothers.

I remembered you and cried. Azad has a beautiful voice, he cried too when he was singing. He also missed his mother whom he has not yet seen for a year. Yesterday we helped a wounded friend. He got wounded by 2 bullets. He didn’t know much about the second wound when he was pointing to the first bullet in his chest. He was bleeding from his flank too, we bandaged him wound and I gave him my blood.

We are in the East side of Kobani, mother.. A few miles only stand between us and them. We see their black flags, we listen to their radios, sometimes we don’t understand what they say when they speak foreign languages but we can tell they are scared.

We are in group of nine fighters. We are in a house on the outskirts of Kobani. We don’t know how much about its owners. There are photos of an old man and one of a young man with a black ribbon, seems like he is a martyr..There is a photo of an old Ottoman map mentioning the name of Kurdistan.

W e have not got coffee for a while, we found out that life is beautiful even without coffee. Honestly I’ve never had a coffee as good as yours mom. We are here to defend a peaceful city.  We never took part in killing anyone, instead we hosted many wounded and refugees from our Syrian brothers.We are defending the city from the barbaric forces.

Mother, I will visit you once these dirty war that was forced on us is over. I will be there with my friend Dersim who will go to Diyarbekir to meet his kids. We all miss home and want to go back to it but this war does not know what missing means. Maybe I won’t come back mother.Then be sure that I dreamed of seeing you for so long but I was not lucky.

I know that you will visit Kobani one day and look for the house  that witnesses my last days… it is on the east side of Kobani, part of it damaged, it has a green door which has many holes from sniper shots and you will see 3 windows, one of the east side, you will see my name written there in a red ink… Behind that window, mother, I waited counting my last moments watching the sun light as it penetrated my room from the bullet holes in that window…

Behind that window, Azad sang his last song about his mother, he had a beautiful voice when he was saying “mom I miss you”.

MOM I MISS YOU.

FOODS: What Are The Foods That After Age 30 Should...
PEOPLE: Pope Francis Opened a Laundromat For The H...
When should you start investing?
Iconic Photos: Children that Changed History

Most cancers are caused by bad luck not genes or lifestyle, say scientists