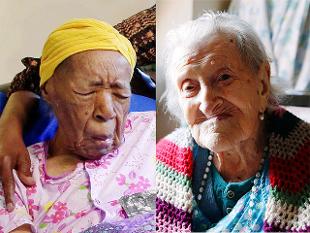 In this Friday, June 26, 2015 photo, Emma Morano, 115, smiles at her physician, Carlo Bava, in her apartment in Verbania, Italy. Morano and Susannah Mushatt Jones, also 115, of the Brooklyn borough of New York, are believed to be the last two people in the world with birthdates in the 1800s. (AP Photo/Antonio Calanni)

When Susannah Mushatt Jones and Emma Morano were born in 1899, there was not yet world war or penicillin, and electricity was still considered a marvel. The women are believed to be the last two in the world with birthdates in the 1800s.

The world has multiplied and changed drastically in their lifetimes. They have seen war destroy landmarks and cities and have seen them rebuilt. They witnessed the Gilded Age, a term coined by Mark Twain, and the dawn of civil rights, the rise and fall of the fascists and Benito Mussolini, the first polio vaccines and the first black president of the United States.

Jones, who lives in New York, currently tops a list of supercentenarians, or people who have lived past 110, which is maintained by Los Angeles-based Gerontology Research Group. The organization tracks and maintains a database of the world’s longest-living people. Morano, of Verbania, Italy, is just a few months younger than Jones and is Europe’s oldest person, according to the group. The group knows of no others born in the 1800s. 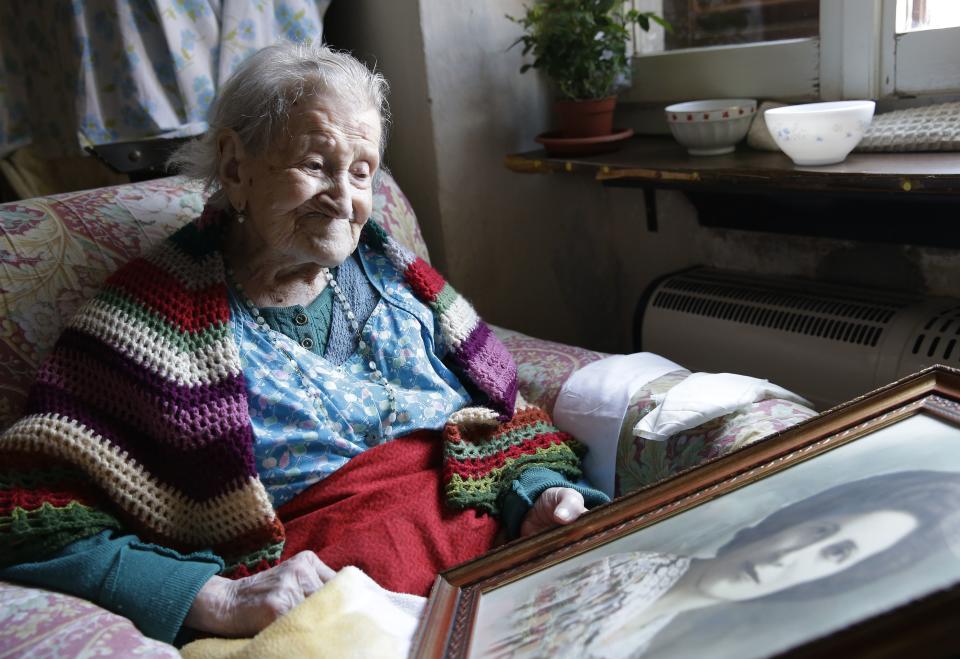 In this Friday, June 26, 2015 photo, Emma Morano, 115, looks at an old portrait of herself in her apartment in Verbania, Italy. Morano and Susannah Mushatt Jones, also 115, of the Brooklyn borough of New York, are believed to be the last two people in the world with birthdates in the 1800s. (AP Photo/Antonio Calanni)

Morano has lived on her own ever since she left her husband in 1938 because he beat her. Now 115, she resides in a neat one-room apartment in Verbania, a mountain town overlooking Lake Major in northwest Italy. She is cared for by her village: The mayor gave her a TV set, her niece stops in twice a day and her adoring physician of more than 25 years checks up on her regularly.

Morano attributes her longevity to her unusual diet: Three raw eggs a day (now two raw eggs and 150 grams of raw steak after a bout of anemia) — a diet she’s been on for decades after a sickly childhood.

“My father brought me to the doctor, and when he saw me he said, ‘Such a beautiful girl. If you had come just two days later, I would have not been able to save you.‘ He told me to eat two or three eggs a day, so I eat two eggs a day.” 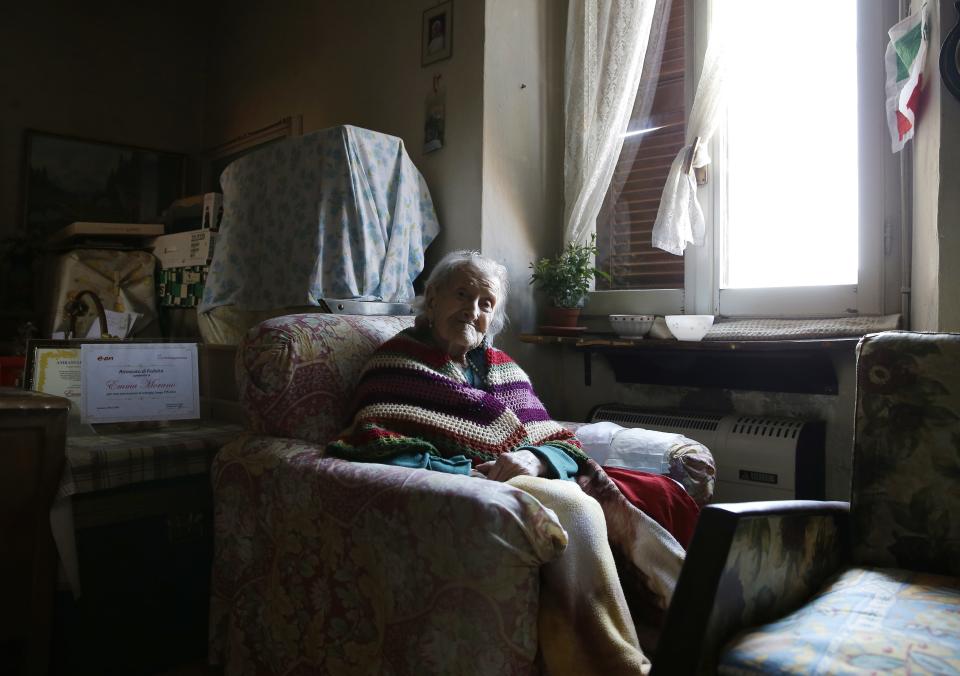 In this Friday, June 26, 2015 photo, Emma Morano, 115, sits in her apartment in Verbania, Italy. Morano and Susannah Mushatt Jones, also 115, of the Brooklyn borough of New York, are believed to be the last two people in the world with birthdates in the 1800s. (AP Photo/Antonio Calanni)

“From a strictly medical and scientific point of view, she can be considered a phenomenon,” he said, noting that Morano takes no medication and has been in stable, good health for years.

Italy is known for its centenarians — many of whom live in Sardinia — and gerontologists at the University of Milan are studying Morano, along with a handful of Italians over age 105, to try to figure out why they live so long.

“Emma seems to go against everything that could be considered the guidelines for correct nutrition: She has always eaten what she wants, with a diet that is absolutely repetitive,” Bava said. “For years, she has eaten the same thing every day, not much vegetables or fruit. But she’s gotten this far.”

Morano’s sister, whom Bava cared for as well, died at 97. On a recent visit, Morano was in feisty spirits, displaying the sharp wit and fine voice that used to stop men in their tracks.

“I sang in my house, and people on the road stopped to hear me singing. And then they had to run because they were late and should go to work,” she recalled, before breaking into a round of the 1930s Italian love song “Parlami d’amore Mariu.”

“Ahh, I don’t have my voice anymore,” she lamented at the end.

Bava also credits Morano’s longevity to her outlook: She is positive — “She never says, ‘I’ve had enough,‘” he said — but stubborn. He recalled that when she needed blood transfusions a few years ago, she refused to go to the hospital. When he warned her that she would die without them, “Her response was ‘That means my time has come. If you want, care for me at home; otherwise, I’ll die.‘”

And even though her movements now are limited — she gets out of bed and into her armchair and back again, her eyesight is bad and hearing weak — she does seem to sneak around at night.

“Her niece and I leave some biscuits and chocolates out at night in the kitchen. And in the morning they’re gone, which means someone has gotten up during the night and eaten them,” he said. 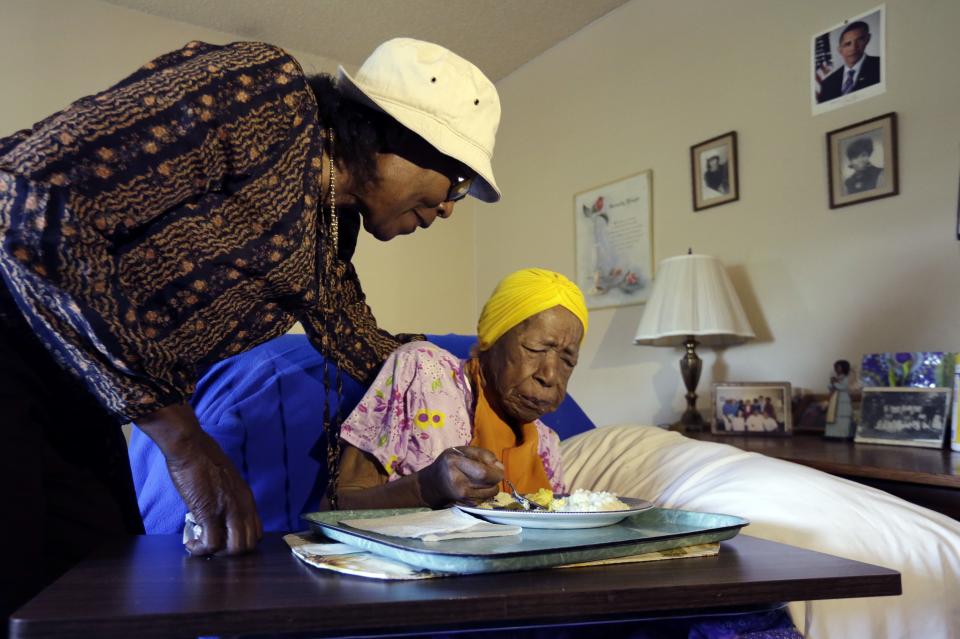 In this Monday, June 22, 2015 photo, Lois Judge, left, helps her aunt Susannah Mushatt Jones, 115, during breakfast in Jones’ room at the Vandalia Avenue Houses, in the Brooklyn borough of New York. Jones and Emma Morano, of Verbania, Italy, who is also 115, are believed to be the last two people in the world with birthdates in the 1800s. (AP Photo/Richard Drew)

Now 115 years old, Jones spends her days in her one-bedroom apartment in a public housing facility for seniors in Brooklyn, where she has lived for more than three decades.

She sticks to a strict daily routine: Every morning she wakes up around 9 a.m., takes a bath and then eats several slices of bacon, scrambled eggs and grits. On a recent day, Jones said little, but family members said she spends her days reflecting on her life and embracing what’s left of it — one day at a time. Her living room walls are adorned with family photos and birthday cards made by children in the community.

“Hey, Tee,” Jones’ niece, Lois Judge, said to her aunt using a family nickname, “How old are you?”

Jones, who wears a yellow turban on her head and a nightgown most days, watches the world from a small recliner. Posters from past birthday parties, letters from local elected officials and a note from President Barack Obama fill the surfaces. A sign in the kitchen reads: “Bacon makes everything better.” 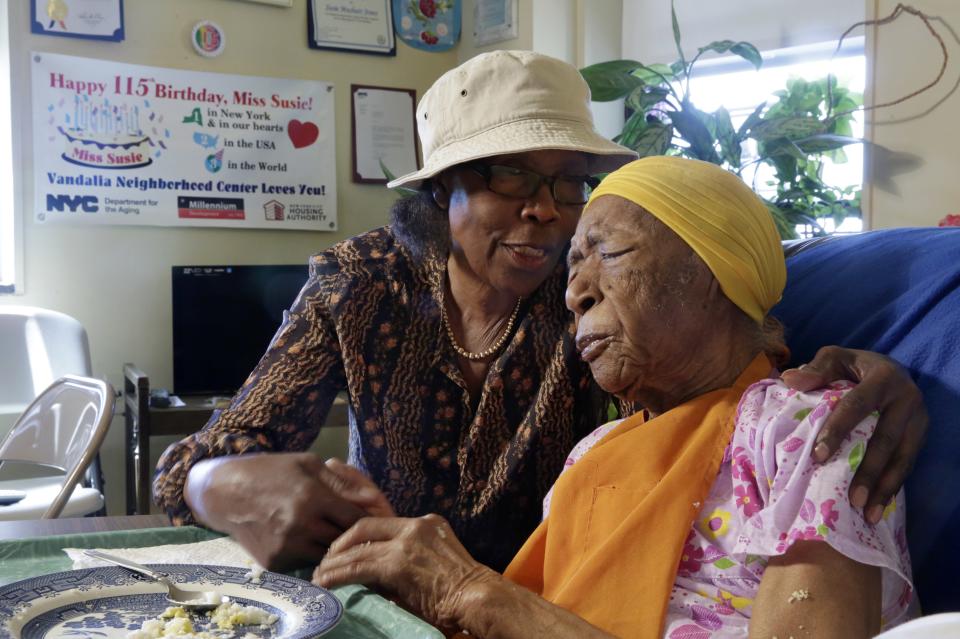 In this Monday, June 22, 2015 photo, Susannah Mushatt Jones, 115, right, is embraced by her niece Lois Judge in her room at the Vandalia Avenue Houses, in the Brooklyn borough of New York. Jones and Emma Morano, of Verbania, Italy, who is also 115, are believed to be the last two people in the world with birthdates in the 1800s. (AP Photo/Richard Drew)

She was born in a small farm town near Montgomery, Alabama. She was one of 11 siblings and attended a special school for young black girls. When she graduated from high school in 1922, Jones worked full time helping family members pick crops. She left after a year to begin working as a nanny, heading north to New Jersey and eventually making her way to New York. 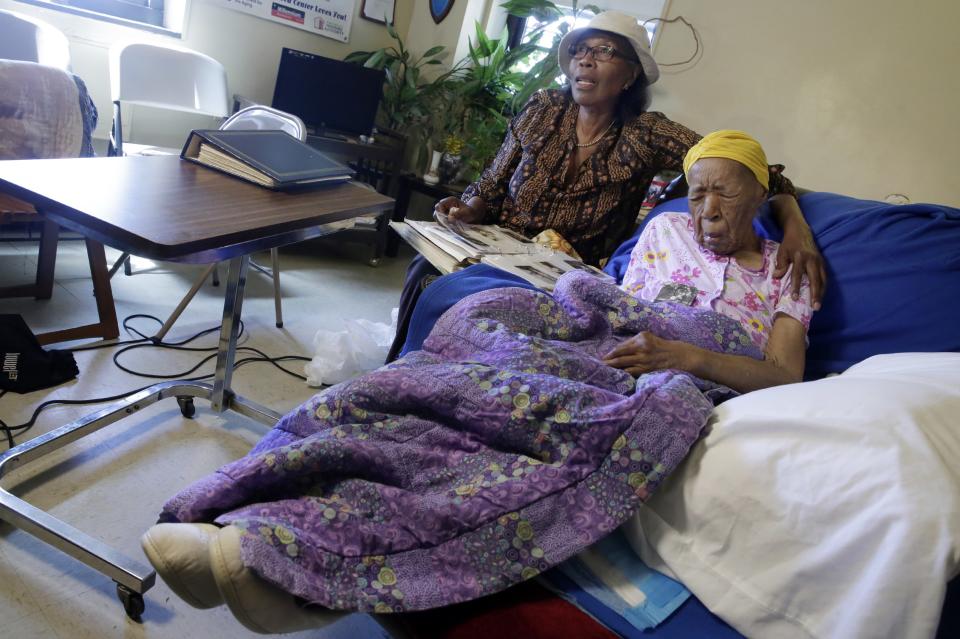 In this Monday, June 22, 2015 photo, Lois Judge, left, talks about her aunt Susannah Mushatt Jones, 115, right, during an interview in Jones’ room at the Vandalia Avenue Houses, in the Brooklyn borough of New York. Jones and Emma Morano, of Verbania, Italy, who is also 115, are believed to be the last two people in the world with birthdates in the 1800s. (AP Photo/Richard Drew)

“She adored kids,” Judge said of her aunt, though Jones never had any children of her own and was married for only a few years. Family members say there is no medical reason for her long life, crediting it to her love of family and generosity to others. Judge said she also believes her aunt’s longevity is thanks to growing up on a rural farm where she ate fresh fruits and vegetables that she picked herself.

After she moved to New York, Jones worked with a group of her fellow high school graduates to start a scholarship fund for young African-American women to go to college. She was also active in her public housing building’s tenant patrol until she was 106.

Despite her age, she only sees a doctor once every four months and takes medication for high blood pressure and a multivitamin every day. Aside from that, she has had a clean bill of health for years, Judge said. Jones is blind after glaucoma claimed her eyesight 15 years ago and is also hard of hearing.

She will turn 116 next week. Family members plan to throw her a party.

This story has been corrected to show the woman’s name is Emma, not Anna.

PEOPLE: Serbian hermit Marija Zlatic gives away in...
Color: Most Amazing Colors of the World
13 Myth and Truth on Beauty
Tales of Horror from Christian Homeschool Movement...

Your Love Is Blind Lyrics by Ramzi