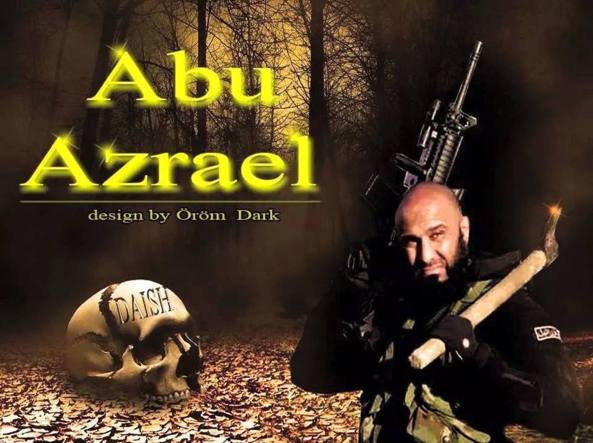 SPEICHER BASE: Abu Azrael-Father of the Angel of Death-is the black-bearded, blade-wielding embodiment of the retribution many Iraqis want against brutal jihadists who seized swathes of their country.

A Facebook page dedicated to the fighter in the Imam Ali Brigades Shiite militia lists him as a “public figure” and has been “liked” more than 280,000 times. There are also numerous images and comments praising the Baghdad native on Twitter. His catchphrase is “illa tahin,” meaning he will pulverise the Islamic State (IS) jihadist group and its supporters until nothing but “flour” remains. It is that idea which many seem to find appealing: a strong response to IS, so different from the impotent collapse of Iraqi security forces last June, after which Baghdad turned to volunteer fighters such as Abu Azrael for support. But the desire for revenge combined with loosely controlled militia forces is a dangerous combination that has led to such groups being repeatedly accused of abuses, including kidnappings and summary executions. “I swear to God, I am not merciful to them,” Abu Azrael, whose real name is Ayyub Faleh al-Rubaie, told AFP at the Speicher military base near Tikrit, a city that Iraqi forces and allied paramilitaries are battling to retake. “I never have any leniency for them,” he said, referring to IS members.

Part of Abu Azrael’s celebrity appeal is his weapons: photos of him resting an axe on his shoulder or holding a sword are widely shared on social media. He is also viewed as striking fear into IS, both by his appearance and actions, turning the tables on the jihadists who have terrified the country for years.

‘Butcher him’
With his right hand broken when he was thrown from a vehicle by a bomb blast, Abu Azrael holds a black-bladed combat knife for now, which he uses to gesture emphatically as he speaks. A scoped M4 assault rifle is slung at his side, and he wears a magazine carrier that also has pockets for grenades.

Patches bearing his nom de guerre adorn the sleeves of his uniform. Abu Azrael listed half a dozen places where he took part in battles against IS, but said he was a fighter before the current conflict began. He said he gained military experience with the Mahdi Army-Shiite cleric Moqtada al-Sadr’s militia that battled US forces in Iraq-and also fought in the Damascus area against rebels seeking to overthrow Syrian President Bashar al- Assad.

Abu Azrael recalled seeing IS members “butchering our sons with axes” in the Amerli area, a mostly Shiite town that the jihadists besieged last year. “I (asked) God Almighty and God granted me my dream,” he said, explaining that one of those responsible was captured, while he exhumed and cut up the bodies of others. “We caught one of them, and we asked him ‘why’, and he said ‘I swear to God, it isn’t me’. But later, images showed that he was the one slaughtering our son,” Abu Azrael said. He then quoted the Quranic verse that says “attack them as they attacked you.” “As he did, I (should) butcher him and make gravy,” Abu Azrael said, leaving the man’s fate ambiguous but strongly implied.

‘Ready for death’
Such a response may be appealing to people who are angry at what IS has done in Iraq-millions displaced, thousands killed, women raped and sold into slavery.

However, one man serving as police, jury, judge and executioner is both illegal and a recipe for innocent lives to be taken, especially in the chaos and uncertainty of war. Abu Azrael described himself as a “simple man” with “a simple familyfour girls and a boy,” and said there is more to him than violence. “You see me go to school to drop off my children and I am peaceful. But I show another face to them (IS),” he said. “I don’t differentiate between Sunnis and Shiites,” he said. “We are all one country and one Iraq.” Asked what he thought of his fame, he said: “Be with God (and) God will be with you.” But Abu Azrael is also keen to emphasise the importance of other fighters. “I am probably in the spotlight because Almighty God made me successful in killing a number of dirty men, but all of the (fighters) are heroes,” he said. If it comes to it, he is ready and willing to die for the cause. “I consider myself 100 percent a martyr, God willing,” he said. “I am ready for death, now and later.” — AFP

The university lecturer who became an axe-wielding Iraqi soldier known as the ‘Angel of Death': Fearsome warrior has become a living legend among those fighting ISIS

By TOM WYKE FOR MAILONLINE

With his thick beard and fearsome axe, Abu Azrael is one of the most recognisable soldiers fighting among the Iraqi forces against ISIS.

Nicknamed the ‘father of archangel of death’ in Arabic, Abu Azrael has become the poster boy of the Imam Ali brigade, a Iraqi Shi’a militia group sponsored by Iran.

He is believed to be a 40-year-old former university lecturer, who left his home to fight Islamic State back in June 2014. Iraqi warrior: With his thick beard and fearsome axe, Abu Azrael is one of the most feared soldiers among the Iraqi forces fighting ISIS.

Such is his fame, his fan page on social media has attracted over a quarter of a million supporters.

Pictures show the bald fighter kitted out in his military fatigues, posing with his famous axe and a heavy machine gun.

Other photos shows the colossal warrior carrying a large sword, fearlessly wandering through the battlefield.

As well as posing with his weapons, Abu Azrael also appears to love a selfie and posting short videos of him and his friends relaxing after battle. Islamic State face a tremendous task to hold on to the Iraqi city of Tikrit and with the arrival of the Iraqi Rambo, morale is high among the Iraqi Shi’a militias. A formidable presence: Such is his fame, his fan page on social media has attracted over a quarter of a million supporters.

Well known for his sense of humour, one video shows Abu Azrael using a captured ISIS walkie-talkie to taunt and mock the depraved savages of ISIS.

The fighter appears to enjoy giving an insight into his life as a soldier. Videos have been posted showing the Iraqi soldier cycling through parts of the Iraqi city of Tikrit.

Another video shows the towering fighter wandering around a captured ISIS bases, taking time to cheekily steal a teapot.

A multitude of stories continue to be reported about the background of Abu Azrael. Some reports even claim he was once Iraq’s national champion in Taekwondo. Well known for his sense of humour, one video shows Abu Azrael using a captured ISIS walkie-talkie to taunt and mock the depraved savages of ISIS.

It is possible he was motivated to join the fight after a representative of Grand Ayatollah Ali al-Sistani issued a call to arms in Friday prayers in mid June 2014.

The militia has recently been fighting alongside the Iraqi army in a bid to re-capture the Iraqi city of Tikrit.

With the arrival of the Iraqi Rambo, morale is high among the Iraqi Shi’a militias, who appear confident in ridding ISIS from Iraq. Selfie lover: As well as posing with his weapons, Abu Azrael also appears to love a selfie and posting short videos of him and his friends relaxing after battle.

Like a lion: Determined to defend his home and country, Abu Azrael joined the Imam Ali brigade, a Iraqi Shi’a militia heavily supported by Iran. Mythical past: A multitude of stories continue to be reported about the background of Abu Azrael. Some reports even claim he was once Iraq’s national champion in Taekwondo.

Struggle then Fly
NO TO RACISM: Why Black People Have To Suffer Most...
SCARY CHALLENGE: The ‘Blue Whale’ Suic...
10 Reasons Why You Should Drink Warm Lemon

"Beautiful Love" Lyrics by THE AFTERS