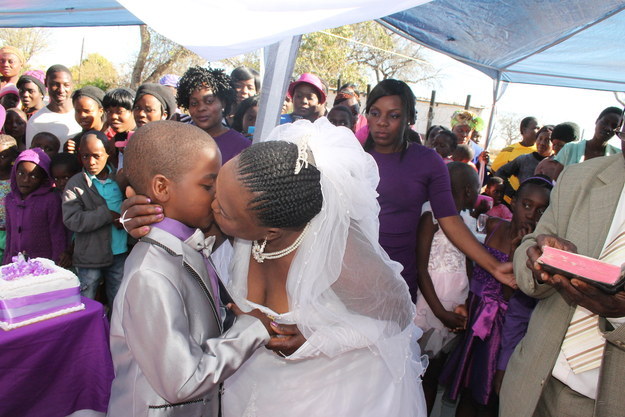 If you can still remember, last 2013, an eight-year-old schoolboy named Saneie Masilela has married a 61 year-old-woman named Helen Shabangu because the ghost of his dead ancestors told him to.

Now that Saneie is already 9, he marries Helen again for the second time.

Nine-year-old Saneie Masilela has become the world’s youngest groom for the second time after remarrying the 62-year-old woman he tied the knot with last year. Dressed in a silvery tuxedo, baby-faced Saneie clutched the hand of mother-of-five Helen Shabangu – her children are aged between 28- and 38-years-old – as they repeated their vows a year on in front of 100 guests.

The schoolboy says he did it to make the marriage ‘official’ but other villagers in Ximhungwe in Mpumalanga, South Africa describe it as “sickening”.

The ceremony – where guests shared a piece of cake – took place in front of Helen’s long-term husband Alfred Shabangu, 66, who was there last year as well.

He said: “My kids and I are happy because we don’t have a problem with her marrying the boy – and I don’t care what other people say.”

Both families claim the wedding is simply another ‘ritual’ after Saneie was told by his dead ancestors to wed last year and his parents forked out £500 for the bride and another £1,000 for the ceremony.

But the schoolboy – the youngest of five children – wanted to follow South African tradition and insisted they have the second ceremony this week to make their marriage official.

The young groom said he still hoped he would have a proper wedding to a woman his own age when he was older.

He added: “I told my mother that I wanted to get married because I really did want to.

“I’m happy that I married Helen – but I will go to school and study hard. “When I’m older I will marry a lady my own age. I chose Helen because I love her and, although we don’t live together all the time, we meet at the dumping site where my mother works regularly.”

Recycling worker  Helen – who donned the same dress as last year – said: “I’m very happy that the boy chose me and my family support and understand that it is part of making ancestors happy.

“One day Sanele would grow normally and have family of his own and get married one day, all this ceremony is for making ancestors happy. We are playing.”

Sanele’s 47-year-old mum, Patience Masilela said: “Sanele was fine and he was happy about the ceremony last year and it what he wanted – he was not shy.

“He was just happy to get married, very excited and was not embarrassed about it. So much so he wanted to do it again.

“After the wedding last year people keep asking them question like will they live together, sleep together, have babies but I keep telling them that after the wedding everything went back to normal – nothing changed.

“It was nice celebrate with a wedding once more, it was after all a calling from the ancestors.

“By doing this we made the ancestors happy. If we hadn’t done what my son had asked then something bad would have happened in the family.” Bright Eyes Make Up
Enthusiasm Quote
10 Most Beautiful Bridges In Nature
Beauty: Do This at Least Once a Week and Your Face...

Photographs: Real Life of Refugees
PERSONALITY: Albert Einstein, An Iconic Scientist ...
Three Passions Have Governed Our Life
10 Things to Consider When Having a Tattoo

Photographs: Real Life of Refugees
PERSONALITY: Albert Einstein, An Iconic Scientist ...
Three Passions Have Governed Our Life
10 Things to Consider When Having a Tattoo