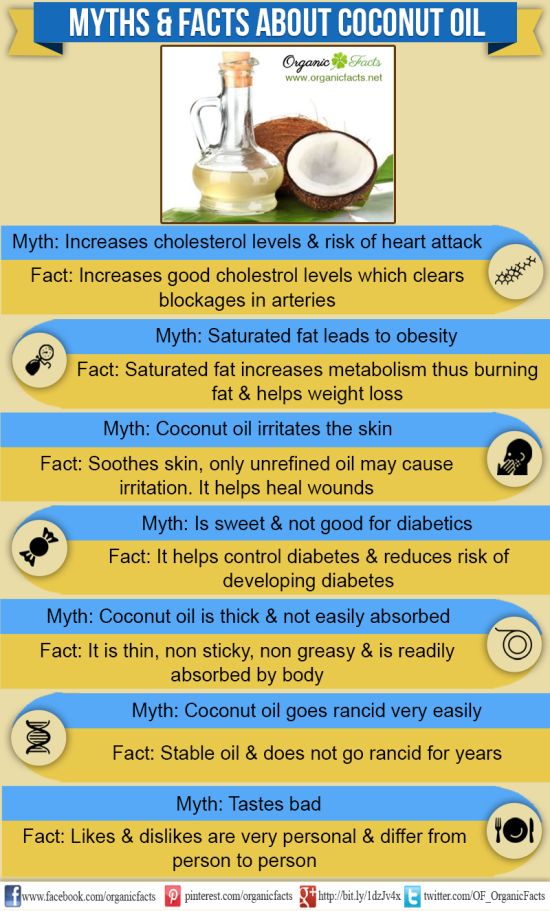 Fact: Common people often immediately associate “bad cholesterol” by the term “cholesterol”. Most of them are unaware of the fact that there are two types of cholesterol, and one of them is good for your health. Furthermore, most of them do not know that so far, the contribution of saturated fats towards a rise in bad cholesterol level has not been proven. This false idea is the result of some anti-coconut oil and anti-saturated fats campaigns powered by edible oil producers to promote non-conventional oils such as soy bean oil or rice husk oil.

Fact: On the contrary, the medium chain fatty acids (saturated fats) present in coconut oil increases the rate of metabolism, thereby leading to higher consumption of energy for metabolic activities and the resultant burning of more fats. In fact, coconut oil is prescribed for losing weight and a systematic intake of coconut oil will help you lose a considerable amount of weight. As you can see, the myths and facts about coconut oil are very different things.

Myth #3: Coconut oil is an irritant for skin.

Fact: The truth is the exact opposite! Coconut oil is one of the most soothing oils for the skin. The unrefined coconut oil may cause some irritation due to the presence of dust or other unwanted particles in it, but that happens in very rare cases. In cases of inflammation caused by insect stings, allergies, sun burns, reaction of drugs, or bruises, this oil can be miraculously soothing. The antimicrobial properties of coconut oil can even help heal wounds.

Myth #4: Coconut oil is sweet and not good for diabetics.

Fact: This oil tastes like any other oil and is not sweet. Coconut oil is made purely from fat, and has no glucose in it, so where would the sweetness even come from? Moreover, this oil promotes secretion of insulin from the pancreas, thus helping to control diabetes. Recent experiments have proved that regular use of coconut oil can greatly reduce the chances of developing diabetes.

Myth #5: Coconut oil is thick and is not absorbed easily.

Fact: Perhaps the condensation of coconut oil in winters and its solid look gave birth to this myth. Now, like other myths and facts about coconut oil, this is also amazingly untrue. Coconut oil, and more so Virgin Coconut Oil, is thin, and is not sticky or greasy, and is readily absorbed by the body. That is why coconut oil is preferred for massaging and as tanning oil.

Myth #6: Since it is derived from coconut (which contains a lot of moisture), this oil goes rancid very easily.

Fact: Coconut oil is one of the toughest oils in this regard. It is so stable that even if it contains some moisture above the permissible limits, it has a far longer shelf life than other oils and does not go rancid for years.

Fact: Now, this sounds like the last excuse someone can try. You cannot prove that something tastes good, since likes and dislikes are very personal and differ heavily from person to person. Still, the staunchest of critics will agree that coconut oil has a superb taste. Still don’t believe me?  You are left with no choice but to try it for yourself and make your own opinions. Fry something in it, taste it and then make your decision.

There are other natural oils as well, but they don’t stand a chance against the goodness of coconut oil. All I can tell you is to try it yourself. 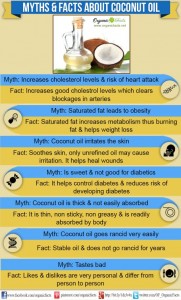 A combination of fatty acids with medicinal value

Coconut oil has been depicted in poor light as containing harmful saturated fat. However, it is a repository of beneficial fatty acids that do more good than harm.

PHOTOGRAPHY: Black Is Beautiful
FASHION: Indian Brides, The Luster Of Golds And Th...
Treatment: Causes and Remedies of Neck Strain and...
Enjoy Your Sunday

Celebrities With The Most Beautiful Legs
Adorable 3 year old is very happy to dance!
FASHION: Beautiful And Modern Hijab Styles To Wear
The Miracle of The Gelatin Recipe – Will Heal Pain...

Celebrities With The Most Beautiful Legs
Adorable 3 year old is very happy to dance!
FASHION: Beautiful And Modern Hijab Styles To Wear
The Miracle of The Gelatin Recipe – Will Heal Pain...