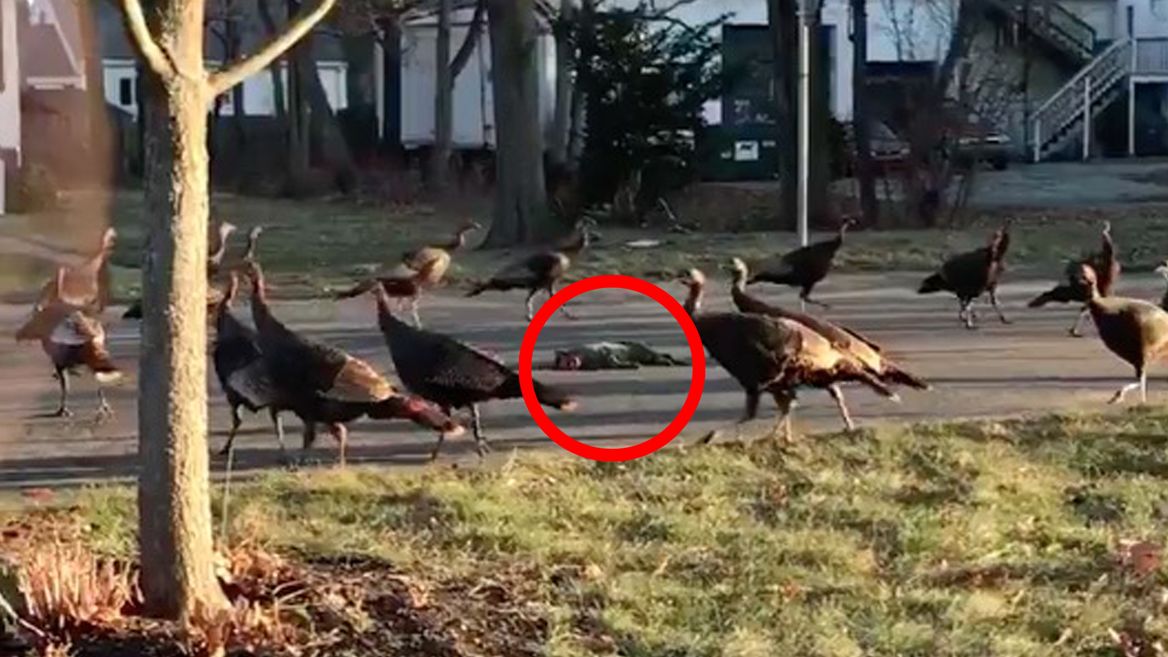 A Massachusetts man recently stumbled upon a strange scene and, lucky for us, he filmed and shared it for the rest of us to ponder.

A Twitter user has captured a bizarre scene on camera in Boston – a flock of turkeys slowly walking in a circle around a dead cat in the middle of a road.

“That is the craziest thing I’ve ever seen,” @TheReal_JDavis tweeted. “Bro, this is wild.”

Jonathan Davis posted a video on Twitter this week of a group of wild turkeys (17 in total) walking in a circle around a dead cat. The commenters speculating as to why the turkeys were behaving so oddly. Some have even suggested black magic is to blame.

“These turkeys trying to give this cat its 10th life,” the Boston resident wrote.

The viral video has been shared more than 37,000 times, with social media users suggesting the “creepy” turkeys might be holding a funeral procession for the unfortunate cat.

So why were the birds circling the dead animal?

Turkeys very rarely eat dead animals, so it is unlikely the bird were inspecting a potential meal. They consume leaves, grass, roots, berries, nuts and seeds.

But, David Scarpitti, who is described by Boston Magazine as “Massachusetts’ foremost turkey expert,” has a more rational explanation for the strange behavior.

He said turkeys are naturally fearful of cats, which can prey on younger, smaller birds. So when the turkeys came across a dead one in the road, they were curious about it.

At the same time, turkeys tend to follow a leader as they roam in search of food. So if the leader decided to march around the corpse and inspect it, it makes sense that the others would follow its lead, while keeping a safe distance from the dead feline. Hence, the circle.

Biologist Alan Krakauer, who studies the behavioural ecology of birds at the University of California Davis, told The Verge that the turkeys could be carrying out a “predator inspection”.

This behaviour enables animals lower down the food chain to approach predators, which can scare them off.

“Sometimes, animals lower down in the food chain approach predators — a behaviour that can be seen as risky, but can actually help the prey,” Krakauer said.

A group of wild turkeys is called a flock, but a group of domesticated turkeys is known as a “rafter” or a “gang”.

Do you think Scarpitti is right? Or do you have another theory?

It Must Have Been Love - Roxette ( Theme from Pretty Woman)

Millennials’ Name the Top 20 Countries To Li...
“Nothing Compares 2 U” by SINEAD OR...
Spring: The First Day Of Seasons
Treatment: OIL PULLING PROMOTES ORAL HEALTH AND DE...

Millennials’ Name the Top 20 Countries To Li...
“Nothing Compares 2 U” by SINEAD OR...
Spring: The First Day Of Seasons
Treatment: OIL PULLING PROMOTES ORAL HEALTH AND DE...