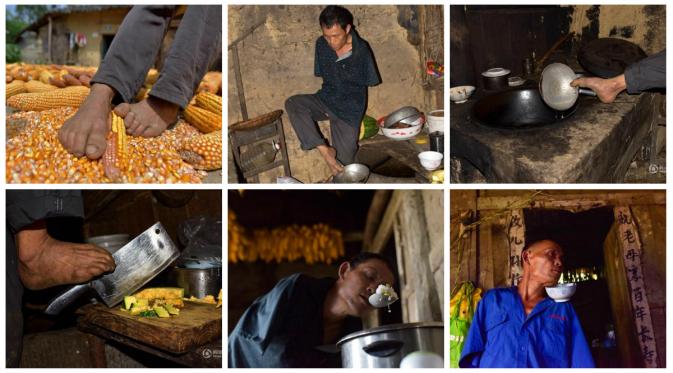 Share on Facebook Share on Twitter
Chen Xingyin, 48,  from Tongxin Village of Fengdu County, in south-west China’s Chongqing municipality, lost his arms after getting a massive electric shock when he was seven years old. He uses his feet and toes to do the work instead.  He learns all skills of housework as well as farm work, just like any other man in his village.

Xingyin, whose older brother and father died before he even turned 22, once angrily objected to friends and neighbours who urged him to become a beggar and said, “I don’t have good hands, but I won’t earn that kind of money as long as I still have good legs.”

Staying with his mother and living a modest life are all he has known. He also never married, while his two sisters left to make their own families when he was 14 years of age.

With his hard labor, he earned himself a property of 24 sheep, two Asian buffaloes, fourhens, and dried corns hanging on the roof. Last month, Chen Xingyin’s 91-year-old mother was not able to leave her bed due to serious illness. He picks up a spoon with his mouth, scoops up the food, and feeds the spoonful of food to his mother. He would repeat many times until his mother shakes her head. 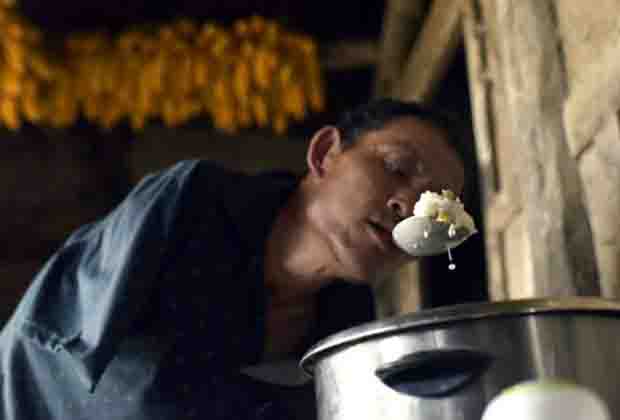 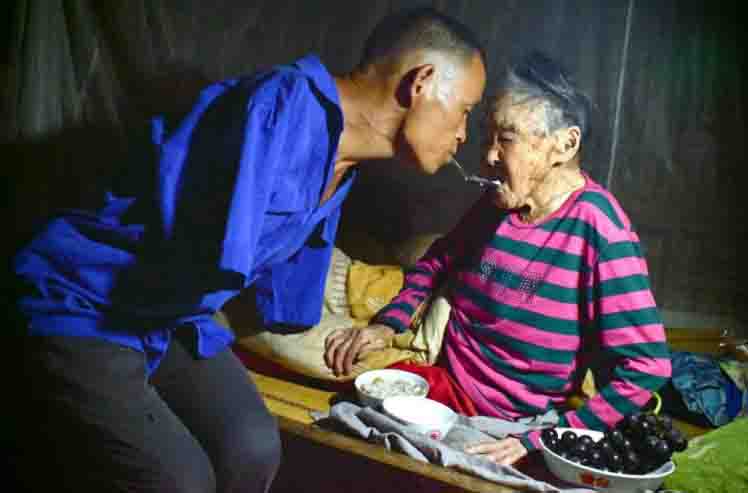 The disabled man’s amazing strength of character has been captured in a series of moving photographs that’s recently emerged.
SOURCES:
xolxol.ph
bbrtv.com
mirror.co.uk

This is not the first time we’ve seen people with nor arms achieve incredible things. Just like:

Peter Longstaff  and Huang Guofo are renowned artists, one painting with his feet and the other with his mouth.

52-year-old Peter Longstaff is living proof that ambition and hope can overcome pretty much anything. Although he is armless, he manages to create artworks most of us couldn’t paint with three hands.

“When life closes a door for you, it opens up another at the same time. I want the new generation to know that there are no real obstacles in life.” – Huang Guofo

Jia Wenqi is a double amputee who, together with his blind friend, has planted over 10,000 trees in the last decade.

Strength and Struggle
Smile and Start To Love Your Life (with photos of ...
HEALTH EDUCATION: Foods That You Think Are Healthy...
LOVE SMS, QUOTES, AND POEMS 1

WE ARE THE WORLD by Michael Jackson

TOUCHING: Mom Abandons Deformed Baby Inside A Shoe...
Who, What, Why: Who are the Yazidis?
Media influences do play a part in shaping teenage...
Kathmandu, Nepal: Pictures of Tihar festival, or D...

TOUCHING: Mom Abandons Deformed Baby Inside A Shoe...
Who, What, Why: Who are the Yazidis?
Media influences do play a part in shaping teenage...
Kathmandu, Nepal: Pictures of Tihar festival, or D...