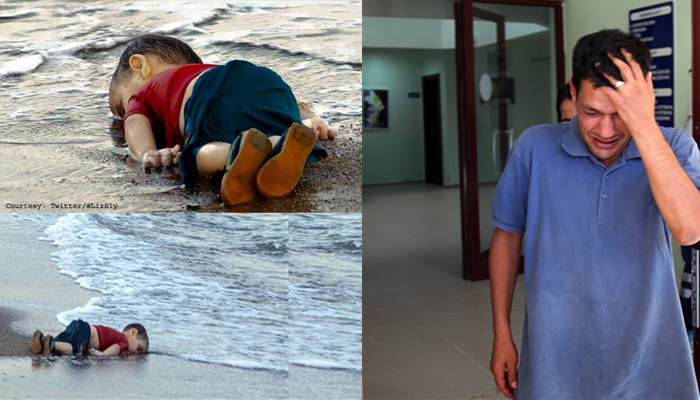 Nilufer Demir, a correspondent and photographer with Turkey’s Dogan News Agency, tweeted: “Tomé la foto para mostrar la tragedia” (I took the picture to show the tragedy).“At that moment, when I saw the three-year-old Aylan Kurdi, I was petrified,”. (asiantribune.com)

“When I realized there was nothing to do to bring that boy back to life I thought I had to take his picture … to show the tragedy,” Nilufer Demir, a photographer with the Dogan news agency, told broadcaster CNN Turk. “I hope the impact this photo has created will help bring a solution,” she said.

At first glance, it looks like a baby doll — maybe left behind by a pint-sized tourist in this popular beach resort.

The grim reality, however, is that the tiny figure captured in images released , September 2, 2015, Wednesday is of a drowned child whose body washed up on the beach in Bodrum, Turkey.

Another survivor, Syrian Omer Mohsin, said he swam ashore after the boat sank shortly after heading off at 02:00 am (2300 GMT) and was now looking for his missing brother.

“There were supposed to be 10 people on the boat, but they put 17 people on board. Me and my brother paid 2,050 euros each,” Dogan quoted Omer Mohsin as saying on its website. 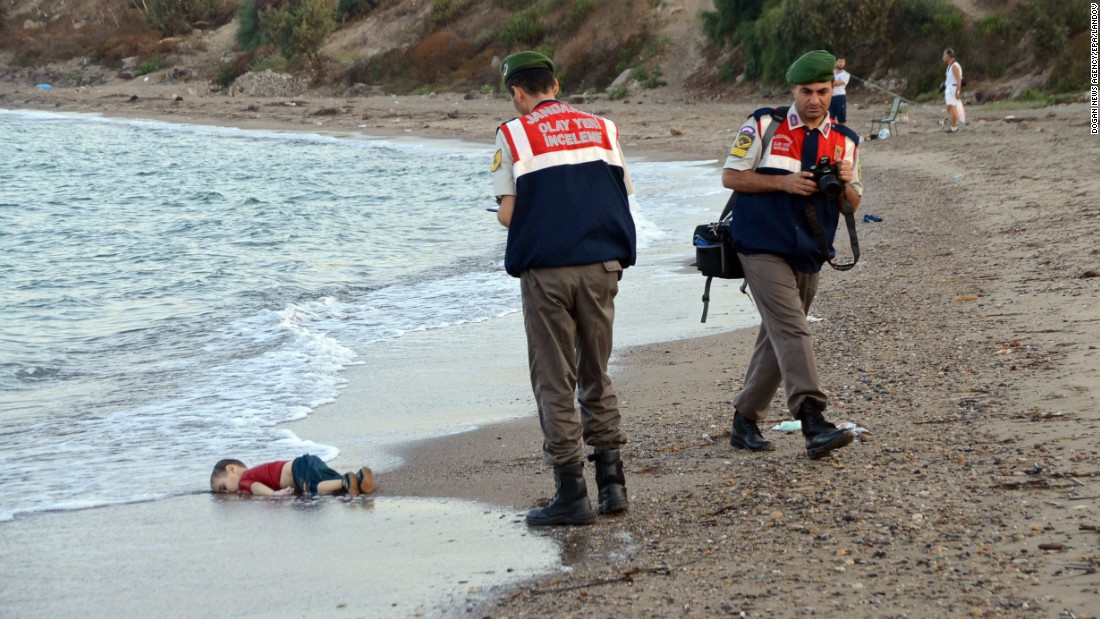 The family of Aylan, a Syrian toddler whose body washed up on a Turkish beach, had been trying to emigrate to Canada after fleeing the war-torn town of Kobani, one of their relatives told a Canadian newspaper. A photograph of the tiny body of three-year old Aylan Kurdi washed up in the Aegean resort of Bodrum swept social media on Wednesday, spawning sympathy and outrage at the perceived inaction of developed nations in helping refugees. His 5-year-old brother Galip and mother Rehan, 35, also died after their boat capsized while trying to reach the Greek island of Kos. His father, Abdullah, was found semi-conscious and taken to hospital near Bodrum, according to Turkey’s Sabah newspaper. REUTERS/Murad Sezer

Two boats carrying what were believed to be Syrian refugees sank off the coast of Bodrum en route for Greece, according to Turkey’s Dogan news agency. It said at least 11 people died.

The image of Aylan, the little boy wearing a bright red t-shirt and shorts lying face-down in the surf on a beach in one of Turkey’s most popular holiday regions, went viral on social media and piled pressure on European leaders. Thousands of migrants have been following the same route in search of a better life in Europe. Many have made it; the child whose body washed up on the beach of Bodrum was just one of the scores who have perished. 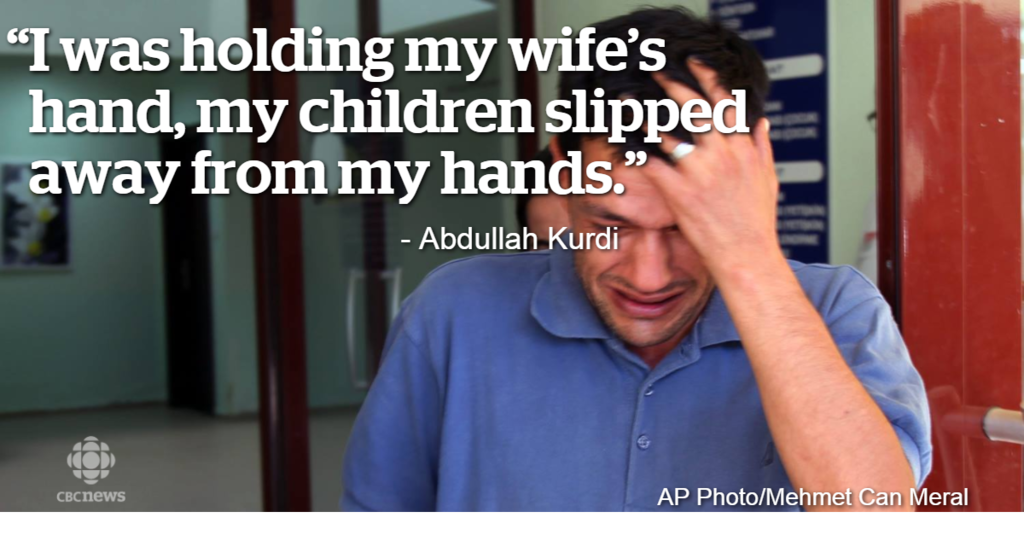 Abdullah Kurdi  described the moments before he realized his family had drowned.

He said he was forced to take control of the boat after the captain panicked and jumped into the sea in high waves.

“We went into the sea for four minutes and the captain saw that the waves were so high and as he tried to steer the boat we were hit immediately,” he said.

“He panicked and dived into the sea and fled.

“I took over and started steering, but the waves were so high that the boat flipped immediately.

“I took my wife and my kids in my arms and I realised they were all dead.”

He added: “My kids were the most beautiful children in the world. Wonderful. They woke me up every morning to play with them and now, they are all gone.

“Now all I want is to lie in a grave next to my wife and children.” (sg.news.yahoo.com)

Aylan’s older brother Galip, who was 5-years-old, was also drowned.

Their mother, Rehan also drowned, while the only family member who survived was Aylan’s father Abdullah, who now wishes to take the bodies of his family home to the Syrian town of Kobani to bury them there with other relatives.

THE FATE OF MIGRANTS/REFUGEES , WHO IS TO BLAME?

Prime Minister says Assad, “butchers of Isil” and people-traffickers to blame for refugee deaths as he hints at more military action over Syria. (buzzfeed.com)

David Cameron has insisted that ministers “do care” about the growing refugee crisis, but refused to say how many more asylum-seekers Britain would take.

The Home Office says that since 2011, almost 5,000 Syrians have been given asylum in Britain. On top of that, the UK has taken 216 Syrian refugees under a specific “vulnerable persons” government scheme.

Cameron said: “We’re taking thousands of refugees and we have always done that as a country, running our asylum system properly and giving a proper welcome to this country…”

He was asked why he would not commit to taking more refugees at this point.

“We keep it under review, we work with our partners, we are taking thousands of people and we will take thousands of people,” he replied. “And what matters is when they come that they get a proper welcome and we look after them.”

The Sky News reporter said: “You say you care. The accusation is you don’t care enough.”

Cameron said: “We do care because we sent the Royal Navy to the Mediterranean to save lives… We will do more, we are doing more.” (buzzfeed.com)

“I think Canada remains a model of humanitarian action,” Canadian Citizenship and Immigration Minister Chris Alexander said, adding that Canada has received “approximately 2,500” Syrian refugees and “over 20,000 Iraqi refugees” so far. “We are the most generous country to refugees in the world. We take one in ten resettled refugees annually,” he said. “The numbers grow quickly through private sponsorship and government assistance.” Alexander went on to blame the media for not drawing enough attention to the refugee crisis. (news.nationalpost.com)

Citizenship and Immigration Minister Chris Alexander suspended his re-election campaign to return to Ottawa for consultations on the migrant crisis.

“The tragic photo of young Alan Kurdi and the news of the death of his brother and mother broke hearts around the world,” Alexander said in a statement Thursday morning. “Like all Canadians, I was deeply saddened by that image and of many other images of the plight of the Syrian and Iraqi migrants fleeing persecution at the hands of ISIS.

“…I am meeting with officials to ascertain both the facts of the case of the Kurdi family and to receive an update on the migrant crisis.” (news.nationalpost.com)

“We have plans to do more, but I would say repeatedly that as we are doing more, we can’t lose sight of the fact that refugee resettlement alone cannot, in any part of the world, solve this problem,” Harper said. The extremist Islamic State of Iraq and the Levant is at the root of the problem, Canadian Prime Minister Stephen Harper said. (news.nationalpost.com)

Earlier in the day, Prime Minister Stephen Harper, who has committed during the campaign to allow 10,000 more Middle East refugees into the country over the next four years, said that simply granting asylum to the desperate won’t fix the crisis.   (news.national.com) ‘We saw yesterday on our screens a very sad and poignant image of children tragically dead at sea in illegal immigration and thankfully, we have stopped that in Australia. ‘Because we have stopped the illegal boats. We have said to the people smugglers: ‘Your trade is closed down’. ‘If you want to keep people safe, you have got to stop illegal migration and that’s what we have done.’ (dailymail.co.uk)

Prime Minister Tony Abbott has described a picture of a little boy dead at sea as a tragic reminder why governments need to implement strong policies to stop the boats.

Mr Abbott’s measures – which include using the Navy to turn back boats – were blasted as ‘inhumane’ and of ‘dubious legality’.

The editorial said it would be ‘unconscionable’ for European governments, grappling with the world’s biggest refugee crisis in decades, to turn to Mr Abbott for inspiration.

‘The world’s war zones are all but certain to continue to churn out an extraordinary number of refugees and economic migrants in the years ahead,’ the Times said.

‘Those people understandably will head to the most prosperous nations, hoping to rebuild their lives.

‘It is inexcusable that some find themselves today in situations that are more hopeless and degrading than the ones that prompted them to flee.’ (dailymail.co.uk) Thousands of migrants have been following the same route in search of a better life in Europe. Many have made it; the child whose body washed up on the beach of Bodrum was just one of the scores who have perished.

How the photo of Aylan Kurdi resonated with Irish Examiner readers

Irish Examiner readers have been sharing their thoughts since the difficult decision was made to publish the deeply disturbing photograph of Syrian boy Aylan Kurdi’s body washed up on a beach in Turkey.

In an editorial, which can be read in full here, Editor Tim Vaughan explained why the decision was made to publish the upsetting image.

“This is one of those occasions when we feel the gravity of a situation justifies the publication of the photograph you see before you,” he writes.

“It does not get much more horrific than this image of the little Syrian boy who never made it to safety in Europe.”

READ NEXT This girl has been on a permanent holiday for the last three years… jealous much?

Aylan’s sad story and the photograph of his tragic death have resonated with Irish Examiner readers and struck a cord with people around the world.

Many of our readers have been sharing their thoughts on the image across social media. Here are ten of the comments left on our Facebook page today.

10 Photos Heat wave: It kills more than 1,100 in I...
PEOPLE: Who Is The Youngest Elected Senator In Phi...
Tips: Getting Rid of Black Elbows and Knees
Armless Chen Xingyin Feed His 91-year-old Mother...

Woman, 24, suffers from 50 orgasms a DAY due to rare condition that leaves her constantly aroused

Health:3 Secrets to Shielding Your Brain from Memory Loss