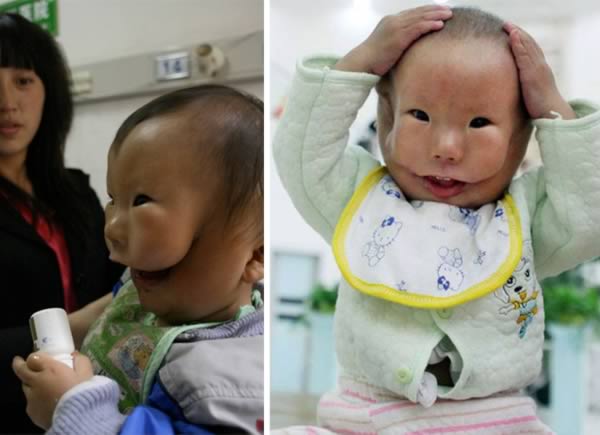 Children born with facial deformities are always a sad tale. Whether or not it’s something correctable, such as a cleft palate, or something you just have to live with, like Moebius syndrome, it’s always gut-wrenching that a poor child has to suffer such a condition. One such example is Kangkang, a 14-month old born with a transverse facial cleft. What does this mean? 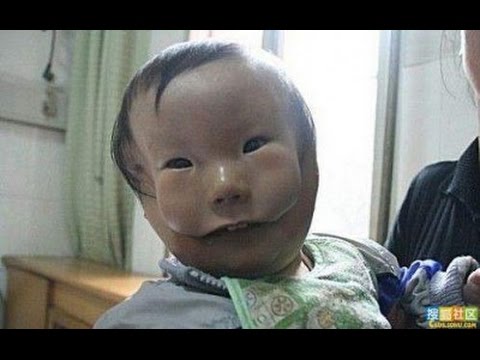 It means the baby essentially has a second face. Hailing from the Hunan province, all signs pointed to a normal, healthy baby for young Yi Xilian, but once Kangkang was born, the truth was revealed. The poor child looks like he’s literally wearing a mask, due in part to a massive cleft that extends almost all the way up to his ears. Unable to see her son upon birth, the unfortunate mother, who is employed at a company that manufactures electronics in the Guangdong Province, pleaded and pleaded with her husband to see the newborn. After finally be handed the child, she broke down into tears.

No one knows what causes this unfortunate condition, though theories abound. It could be caused by an infection, or even frequent drug use by the mother. According to one source, the only drugs the mother took while pregnant were prescribed anti-abortion agents her doctors prescribed. Sadly, this condition is incredibly expensive to treat, as Yi learned when she took Kangkang at 20-days old to a hospital in Changsha. The final tally: around 300-400,000 Yen, or approximately 80,000 to 100,000 dollars.

Thankfully, there is a happy ending, as Kangkang’s family has managed to gather together enough money for treatment at the People’s Liberation Army’s Military No. 163 Hospital.