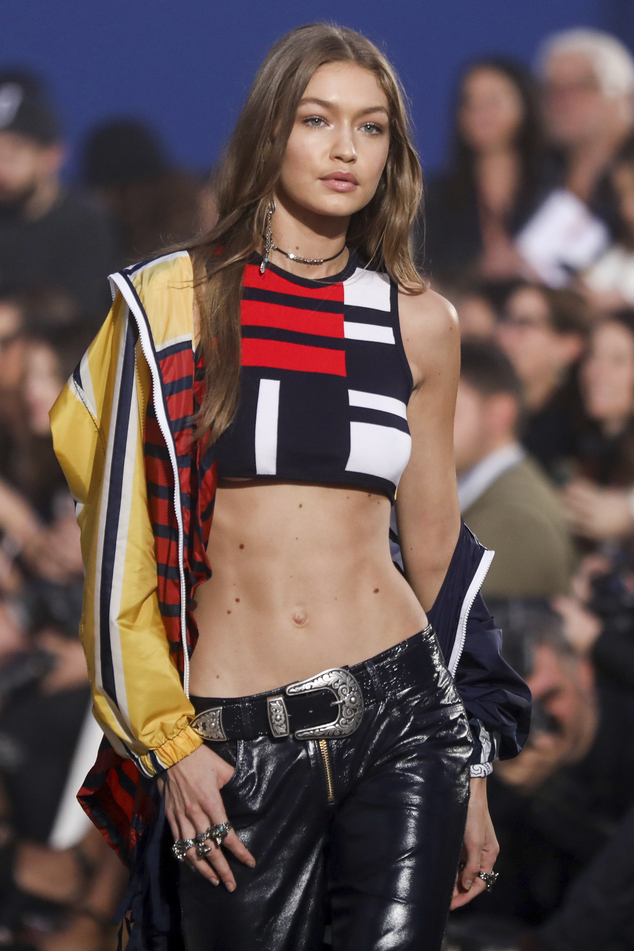 The scene at the Tommy x Gigi Spring-Summer 2017 show

In Venice Beach, Gigi Hadid strode down the runway at Tommy Hilfiger’s Spring 2017 show, a long stretch of toned stomach on display with clean, sun-kissed skin and a perfect tumble of waves. It was the exact easy, Californian beach beauty look that Joan Smalls, Romee Strijd, and more received backstage at the expert hands of makeup artist Pat McGrath. Yet with Hadid filling the dual roles of runway model and codesigner, the usual hours-long hair and makeup routine would not do.

Eschewing a traditional runway show for the second season, Hilfiger opted for a “See now, buy now” collection. Model and branding powerhouse Gigi Hadid helped collaborate on the project, stamping her name on everything from bomber jackets to sneakers.

As for the show itself, Gigi opened in latex pants (Hilfiger himself describes the material as having a “wet look”), an ultra-cropped red, white, and black crop top, and a yellow raincoat slouching down around her arms. According to the brand, the collection is supposed to “celebrate 1960s love and liberation with a modern-day twist. Washed denim patchworks, sun-washed palettes and utilitarian details are inspired by the carefree beaches of Southern California.”

Some items — like metallic-blue fringed miniskirts — feel fresher than other pieces, for example the denim slapped with cartoon-like patches that you could just as easily find at Forever 21.

Hilfiger’s line is as true to its Americana roots (“America First”?) as ever before. Many of the pieces are unabashedly red, white, and blue, covered with stars and stripes, and bold primary colors. A model walks the runway during the Tommy Hilfiger Women’s as a part of Spring 2016 New York Fashion Week at Pier 36 on September 14 (Source: nydailynews.com) Kai and His Girlfriend, Ellen
Amazing Photography of Sports
What makes Good People Do Bad Things?
Health: The Correct Way Of Drinking Water As Per A...

Kai and His Girlfriend, Ellen
Amazing Photography of Sports
What makes Good People Do Bad Things?
Health: The Correct Way Of Drinking Water As Per A...