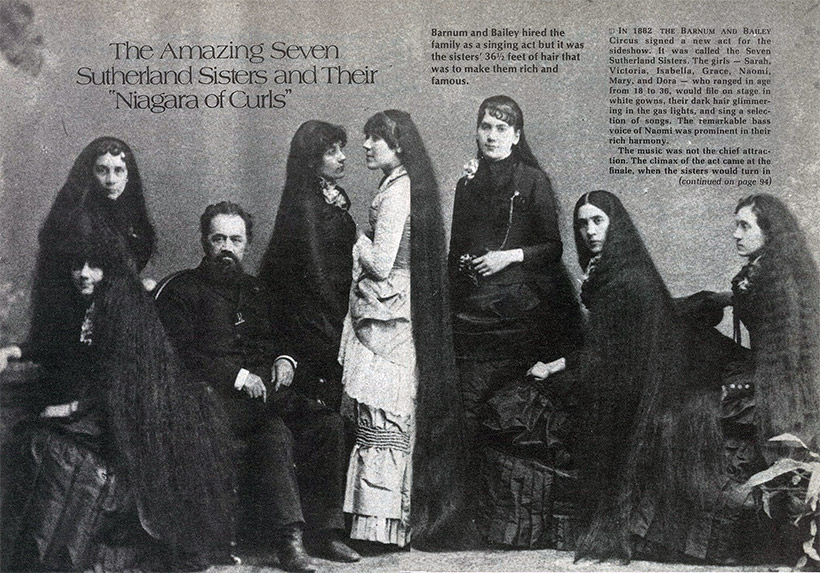 Forgotten past: The Sutherland sisters went on to make a fortune from their trademarked hair 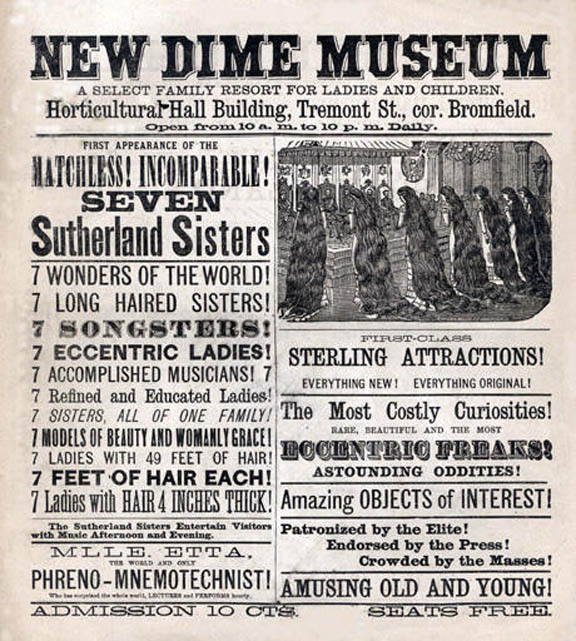 A group of women hailed as ‘America’s first celebrity models’ tantalized audiences during the 19th century, not with provocative dance routines or barely-there outfits, but with their Rapunzel-like locks.

The Sutherland Sisters, consisting of Sarah, Victoria, Isabella, Grace, Naomi, Mary and Dora, who ranged in age from 18 to 36,  each boasted ankle-skimming hair which apparently measured a collective 37 feet in length.

Flaunting all that awesome hair onstage wasn’t quite enough to launch the Sutherlands from abject poverty to riches, so the sisters’ father, the Rev. Fletcher Sutherland, concocted a patent hair-growing tonic. Because Victorian women coveted the sister’s luscious locks, the cash came flooding in. The family grew rich beyond its wildest imaginations, as the sisters knocked serious political issues off the newspapers’ front page with their outrageous celebrity antics. By the mid-1880s, none of the sisters could walk down the street, their flowing tresses dragging behind them like dress trains, without being mobbed by starstruck fans. 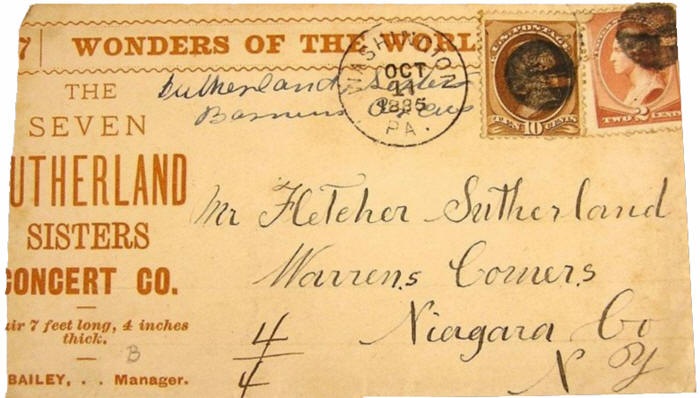 The siblings’ biographer, Brandon Stickney reveals how they became one of the ‘sexiest’ performing acts in the U.S. and their patented ‘miracle’ hair-growing tonic scored sales of over $3million.

In an effort to dig the family out of poverty their father, Reverend Fletcher Sutherland, pushed them into show business, originally encouraging their singing talents.

In 1882 the Barnum and Bailey Circus signed a new act for the sideshow. It was called the Seven Sutherland Sisters. The girls would file on stage in white gowns, their dark hair glimmering in the gas lights, and sing a selection of songs. The remarkable bass voice of Naomi was prominent in their rich harmony.

The music was not the chief attraction. The climax of the act came at the finale, when the sisters would turn in unison. letting their voluminous tresses — a collective total of 36½, feet of hair — spill down their backs, over the crest of the stage. and into the orchestra pit. A gasp of amazement and delight would sound through the audience, followed by thunderous applause,

The act was a hit, but it was only the start of the saga of the Sutherland Sisters a story more bizarre than any fiction writer could imagine.

After they joined the circus company, Barnum & Bailey, where they were billed as the ‘the seven most pleasing wonders of the world’, Fletcher realized the audiences were more enthralled by their flowing tresses than their vocal prowess. The Sutherland girls were the offspring of a ne’er-do-well Vermonter. Fletcher Sutherland, and his wife Mary, a student of music. Two of the daughters are listed on census records as adopted, and local speculation held that they were born to Martha Brink, Mary’s sister, who lived in the Sutherland house. Martha cared for the Sutherland children after her sister died in 1867.

Raised in poverty and shunned by local society, the Sutherland sisters shared two assets — musical talent and rich, thick hair, which was said to be enhanced in its length and beauty by the use of a foul-smelling ointment brewed by their mother.

Their musical abilities were what led Fletcher Sutherland to introduce his daughters to the world of the circus, but it was their hair that would make them rich, Naomi married J. Henry Bailey, nephew of the co-owner of the circus, in 1885, and Bailey, knowing there were more bald men than music lovers, took over the management of the sisters’ act. He started selling hair ointment, which Fletcher concocted from his late wife’s formula, using the Sutherland Sisters as his promotional tools. 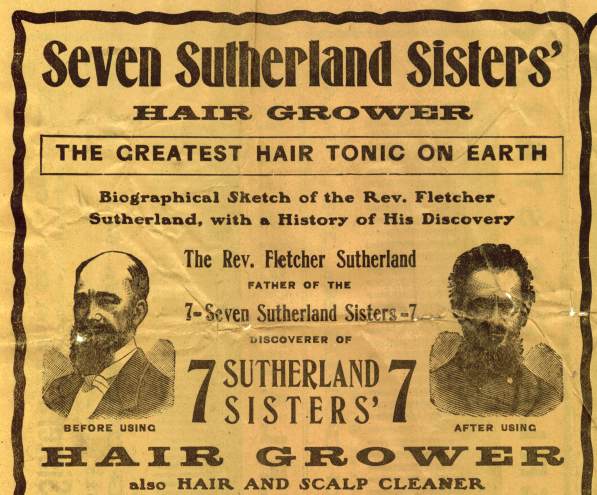 The Seven Sutherland Sisters’ Hair Grower and its related products — scalp cleaners anti-dandruff potions, and hair coloring — made millions, thanks to the grueling promotional tours featuring a “Niagara of Curls.” The sisters were able to build an ornate Victorian mansion on the site of their grandfather’s log cabin in western New York state and supply each of the seven bedrooms with running water in marble bathrooms. To ensure a ready supply of water, a huge tank was installed on top of the mansion and it was refilled daily by workmen.

The money, which also flowed in like water, seemed to amplify the family’s eccentricities. Pets were treated like royalty, with winter and summer wardrobes, and grand funerals and obituaries in the local newspapers. The carriage horses were shod in gold. The sisters sponsored many a gala social for the neighbors, often including fireworks. All that money in the hands of a group of single women attracted adventurers. One of these was Fredrick Castlemaine, who was thought to be sweet on Dora, but who surprised everyone by marrying her older sister Isabella. He was 27, she was 40.

Castlemaine was handsome and charming but had a few eccentricities of his own, like addictions to opium and morphine, and the unnerving hobby of shooting the spokes out of wagon wheels from his seat on the Sutherlands’ front porch. Impressive though his marksmanship may have been, local farmers were unhappy with this practice. He salved their indignation with handsome payments. In 1897, while accompanying the sisters on one of their tours, Castlemaine committed suicide.

Tragedies such as this and the earlier death of one of the sisters, Naomi, seemed to unhinge the remaining women. Naomi’s body lay in state at the mansion for a number of weeks while construction of a $30,000 mausoleum was planned. But the plans were eventually abandoned, and Naomi was buried in the family plot without so much as a headstone.

When Fredrick died, the sisters brought his body home and it, too, lay in state in the music room for several weeks, unembalmed, in a glass-domed casket. The sisters would visit the remains and sing Fredrick’s favorite songs. Finally, the local health department intervened, and forced the reluctant sisters to move the body to a $10,000 granite mausoleum. Even then, Isabella would walk the three miles to the cemetery every night, carrying a lantern, to commune with her lost husband. This went on for two years, until she met and married Alonzo Swain; she was 46, he was 30.

Swain persuaded Isabella to sell her shares in the family corporation and join him in an ill-fated attempt to sell a competing hair restorer, whose formula called for nine quarts of English rum and two quarts of alcohol. The venture failed, Isabella died a pauper, and Alonzo disappeared.

Her sister’s experiences with Castlemaine and Swain did not prevent Victoria Sutherland from marrying a 19-year-old man when she was 50. This caused a rift within the family and the other sisters, who never married, refused to visit Victoria until she was on her deathbed.

The remaining women were dogged by other forms of misfortune. Mary had periods of insanity, and was often kept locked in her room. The popularity of shorter hairstyles for women ended the success of the hair grower, and the fortune it had made for the sisters withered away. In 1926, the three surviving sisters went to Hollywood to help a studio make a movie about their lives, but the project was scrapped, and Dora was killed in an auto accident there. She was cremated in Hollywood, but Mary and Grace had no money to pay for the services, so (at the date of this article) Dora’s ashes are still in Hollywood, awaiting claimants.

The last two sisters returned to their decaying mansion. and lived in the same poverty that had scarred the beginning of their lives. Eventually even the house was sold. A few years after the death of the final surviving sister, the mansion burned to the ground, leaving only Castlemaine’s grandiose mausoleum and, perhaps, a few dusty bottles of the Sutherland Sisters’ Hair Grower in attics and cellars to tell their story. 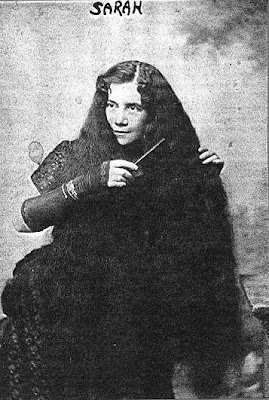 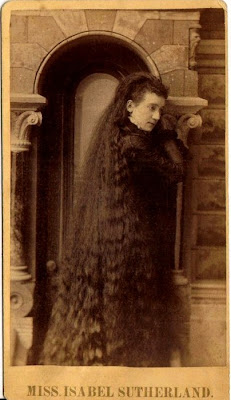 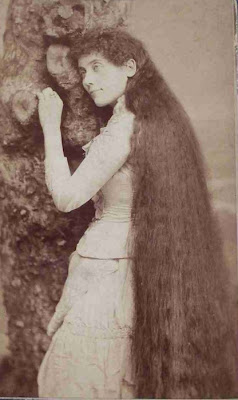 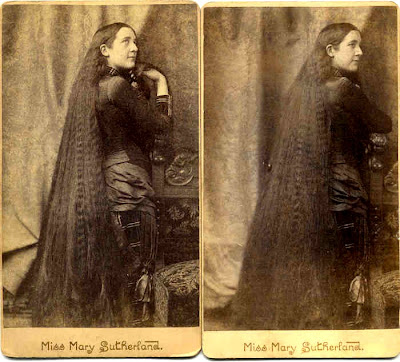 BEAUTY TIP: Facial Massage for a Natural Facelift without Surgery