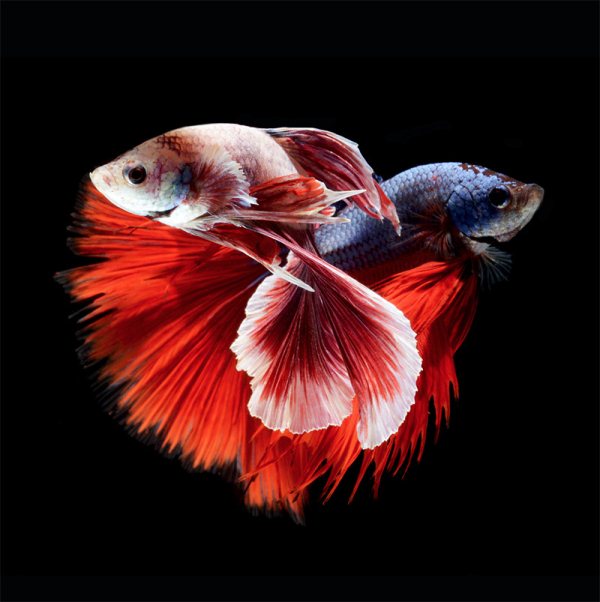 The Siamese fighting fish, also sometimes colloquially known as the betta (Betta splendens), is a species in the gourami family which is popular as an aquarium fish. This species is native to the Mekong basin of Thailand, Laos, Cambodia, and Vietnam, where it can be found in standing waters of canals, rice paddies, and floodplains.They are called pla-kad (biting fish) in Thai or trey krem in Khmer. They tend to be rather aggressive. In January 2014 a large population of the fish was discovered in theAdelaide River Floodplain in the Northern Territory, Australia. As an invasive species they pose a threat to native fish, frogs and other wildlife in the wetlands.

Bettas do have an aggressive nature, because they have to survive in small bodies of water, and therefore must defend their territories and their females against other males. This fierceness is what led to breeding the Betta as a fighting fish. In the wild, Bettas spar for only a few minutes or so before one fish backs off – and no harm comes to either. In captivity this can carry on for hours, even unto death – while large amounts of money are wagered,  often with potential losses as great as a person’s home! Although this is no longer legal, Siamese fish fighting still takes place.

Betta splendens have been affectionately nicknamed “The Jewel of the Orient” due to their beauty and wide range of colours – which are produced through selective breeding. Wild Bettas exhibit strong colours only when agitated. But over many years breeders have been able to make this colouration permanent, and a wide variety of hues breed true.

Colours available to the aquarist include red, blue, turquoise, orange, yellow, green, bright blue with pink highlights, cream and even true opaque white  – not to be confused with albino, which is still fervently sought. The shades of blue, turquoise and green are slightly iridescent, and can appear to change colour with different lighting conditions or viewing angles; this is because these colours, unlike black or red, are not due to pigments, but are created through refraction within a layer of translucent guanine crystals. Breeders have also developed different colour patterns such as marble and butterfly, as well as metallic shades like copper, gold, or platinum mainly by crossing B. splendens with other Betta species. And they are still at it.

Whereas Male Bettas have always been traded preferentially, because of their beauty compared to the females, recently breeders have developed the same range of colours in females previously only bred in males. Of course, females never develop fins as showy as the males of the same type and are often more subdued in colouration. But they have now become an attractive option for the aquarist.

In the wild Betta Fish seldom survive for more than a year or two. However, when they’re bred in captivity and are kept in ideal conditions Betta Fish can live anywhere up to 2-4 years. 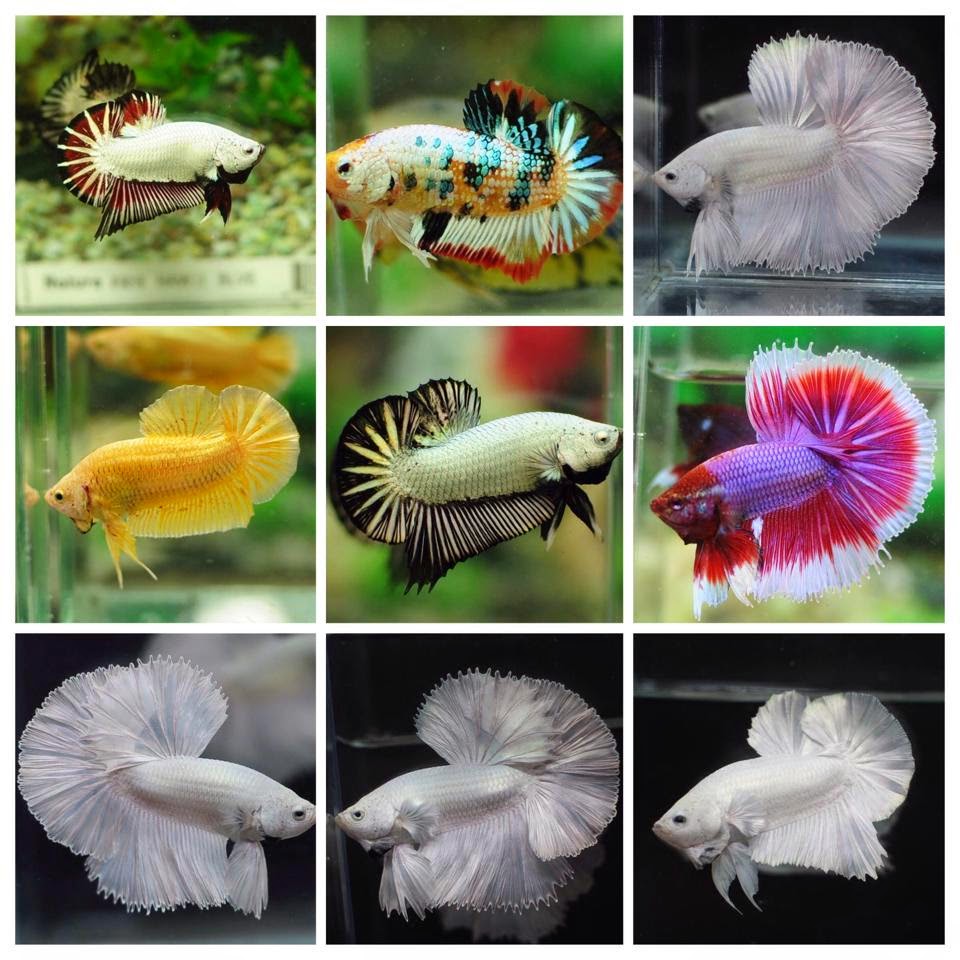 HOW TO IDENTIFY BETTA CROWNTAILS

HOW TO TAKE CARE OF YOUR FISH Picking your fish
Betta fish come in many different colors and patterns, so sometimes it is hard to tell if the fish is just a pale color, or if it is unhealthy. if you follow this key, you will most likely take home a healthy fish.1. A betta fish should be brightly colored. Some fish are naturally pale, but it is usually easy to tell those from sick fish. If the fish looks grey and speckled, and the tips of it’s fins are colored, that indicates that the fish was once a different color and is probably not very healthy.

2. A fish should not have holes in it’s fins. Bettas sometimes have “stringy” fins, but if the strings seem irregular or if there are holes in the fins, this may mean the fish is sick.

3. Eyes. The fish’s eyes should be healthy and shiny, which is sometimes hard to see underwater. However, if the eyes are really bad, you will be able to tell.

4. The fish should respond to you waving your hand in front of it. Fish do not like it if you tap on the side of the tank, so waving your hand a few times is a better alternative. If the fish moves, it’s probably healthy.

Remember, it’s okay to get a fish that doesn’t look 100% healthy. Pick the fish you like. Besides, it will probably perk up once you get it into warmer water, in it’s new bowl.

Betta fish are famous for not needing a filter in their tank. Instead, they get oxygen from the top of the bowl. Bettas are also famous for being able to live in small spaces.Requirements:

1. Plants- bettas like to rest in plants. You can use fake plants, or buy real ones. Make sure they come from the pet store, and are meant to be underwater. Other plants, fake or real, can poison your fish. I also do not recommend using “betta bulbs,” because they can grow fungus and poison your fish.

2. Size- Bettas can live in small spaces, but they will be uncomfortable in anything less than a half gallon. 1 gallon is probably ideal. If you have more than 5 gallons, you need a filter.

3. Cleaning- You should clean your betta’s tank once every week. Make sure you rinse the gravel and any decoration, and these things can get dirty and make your fish sick.

4. Water temperature- Bettas are considered tropical fish, so they are most comfortable in warmer water. The water should be between 70 and 80 degrees.

5. Do not put your tank in direct sun. This is bad for the fish, and will aggravate it.

I don’t know much about this, but bettas are sensitive to the pH levels, so it might be good to invest in a pH test kit for the first few weeks that you have your fish. If the levels remain normal, you will not need to test anymore, but of the levels fluctuate often, you may need to change something on your tank.

Also, keep male bettas separate. There are tanks that come with dividers to keep your fish separated. You can however, have as many as 5 female bettas living together, and 1 male with them, as long as they don’t fight.

Last of all, wall mounted tanks are hard to clean, so if you want one, make sure you have a way to maintain it.

Do not feed your betta tropical fish flakes. These are bad for them. Instead, feed them betta pellets, brine shrimp, or bloodworms.When you clean the tank, do not take out all the water. Take out about half, then replace it with clean. If you do take out all the water, let it sit for a little while before putting your betta in.
Resource: instructables.com
***
1. The Labyrinth Organ
The most unique thing about the betta fish is it’s evolution of a labyrinth organ. Located at the top of the betta’s head, the labyrinth organ allows the betta to breath air from the surface. There are over 72 types of fish who have this special organ; most of which originate in the shallow waters of Africa or Southeast Asia, where low water depth and high temperatures result in low oxygen saturation in the water.2. The Appearance

The betta fish as grown in popularity in large part due to it’s appearance. Siamese fighting fish is found in more than 25 different colors and patterns. The most common colors are red, blue, turquoise, and white. When a betta fish is happy and healthy, it’s colors become more vibrant.

The elaborate fins are also a trait of the betta fish. Male betta fish have long and flowy fins, while females often have shorter fins. There are seven different varieties of fin types in betta, the most common being veiltail, followed closely by crowntail. These two varieties are usually found in most pet stores.

3. The History
Betta fish are native to the rice paddy fields of Thailand (previously known as Siam, hence the name Siamese Fighting Fish), Indonesia, Malaysia, Vietnam, and parts of China. In the early 1800s, the King of Siam began to notice that his subjects were fighting these fish and began to regulate and tax the sport. Unlike western cock and dog fights, the betta fish fights were based on bravery, not injury. Spectators would bet on how long a fish would fight and which one would retreat first.

The betta fish of these fighting competitions were not the colorful, flowing fish that we know today. The bettas of the time were typically short-finned and mud-colored, valued for their fighting skills, not their beauty. It wasn’t until 1927 that the first bi-colored betta’s arrived in San Francisco. After that, people began breeding betta fish for their wide array of colors and fins, giving us the many varieties we see today.

Sisters of the Valley: Selling Drugs To Heal The World

Michael Jackson: They Don't Care About Us

TRAVEL: Ma’dan, The Lost Culture and The ...
Clean the Liver With This Cheap Fruit: Russian Fol...
NATION: Coverings For Women ‘not mandatory&#...
Chron’s Disease: Anatomy and How the Digesti...