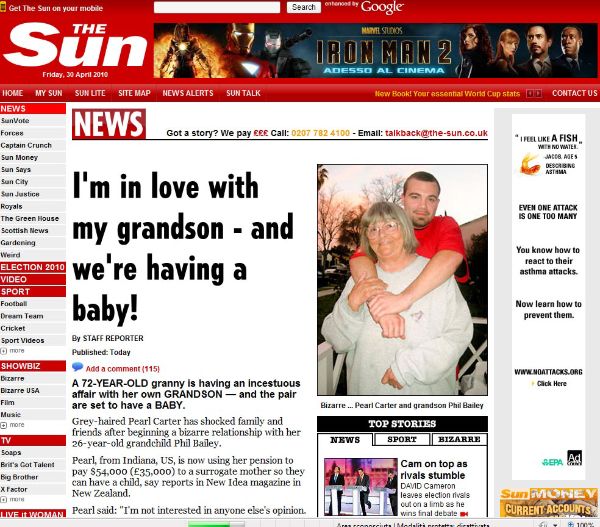 Lynette Bailey, who is deceased, is Carter’s daughter and she’s Phil’s mother. Pearl gave Lynette up for adoption when she was 18 years old, so she did not raise Phil’s mother. When Lynette passed away,  Phil tracked down his long lost grandmother. He began looking for his family after Lynette passed away in 2006 and found his long-lost grandmother.  Pearl, who’s 46 years older than her grandson, says she knew they’d never have a normal relationship when they met.

“From the first moment I saw him, I knew I would never have a grandmother-grandson relationship. For the first time in years, I felt sexually alive,” Carter said.

They spend their first week together platonically, but that didn’t last.  Pearl admits she called Phil into her bedroom and kissed him expecting rejection, but he actually kissed her back and the two were inseparable ever since. It was during their second week together after dinner and wine, that Pearl made her move. “I called Phil into my room, we sat on the bed, leaned over and kissed,” she added.

Pearl is reported as saying: “I’m not interested in anyone else’s opinion. We love each other and soon I’ll be holding my son or daughter and Phil will be the proud dad.”

Phil confirms that he had feeling for Pearl when he met her. Phil said: “I wanted to kiss her there and then. My feelings were overwhelming. I love Pearl with all my heart. I’ve always been attracted to older women and I think Pearl is gorgeous. Now I’m going to be a dad and I can’t wait.”

When asked how the couple feel about other peoples opinions of their relationship, Phil explains, “Yes, we get laughed at and bullied when we go out and kiss in public but we don’t care. You can’t help who you fall for.” Pearl says. “I make no apologies and I believe God’s given me a second chance.”

The retired grandmother isn’t carrying the baby herself. Apparently they used Pearl’s retirement money and have spent a staggering $54,000 hiring a surrogate mum and buy a donor egg, which has been fertilized with Phil’s sperm to help them with their dreams of having a child.

Roxanne Campbell, 30,  agreed to be the surrogate after she saw how much the two are in love. The grandmother had been saying that they do not care about others opinions about their bizarre relationship.

The couple say they don’t care about being laughed at and bullied, but perhaps their child will.
Sources:

A bizarre story that went viral in 2010 described a grandmother and grandson who fell in love and planned to have a baby together.

Is it possible that he is looking for a motherly love? Or is there a possible of “Mommy Syndrome”?  This is a grotesque relationship. Now that they are bringing a child into the mix, what effect will this relationship have on their baby?  Should they be able to keep their child?  The so called “Mother” has maybe five-ten good years left and sadly the child will grow up confused.

There is some science behind this type of story; This case is called GSA (genetic sexual attraction) which is  recognised as something which can happen when close relatives meet as adults .  GSA is a natural response to a broken situation;

“Humans have been designed to bond with their kin starting at the onset of the relationship and for whatever reasons (divorce, abandonment, adoption) it did not happen. This need to bond, which has been dormant for years, finally has the opportunity at the reunion to form a fierce and profound connection.”

Incest is wrong and this behaviour is illegal.

“The English word incest is derived from the Latin incestus, which has a general meaning of “impure, unchaste”. It was introduced into Middle English, both in the generic Latin sense (preserved throughout the Middle English period) and in the narrow modern sense. The derived adjective incestuous appears in the 16th century. Before the Latin term came in, incest was known in Old English as sibbleger (from sibb ‘kinship’ + leger ‘to lie’) or mǣġhǣmed (from mǣġ ‘kin, parent’ + hǣmed ‘sexual intercourse’) but in time, both words fell out of use.” (wikipedia)

Incest in Bible, when Sodom & Gomorra Perished by the rath of God, Loath’s daughters slept with their father to have children. It was due to special circumstance. In the modern world its a rare case to hear 72 yr old woman conceived naturally. Only in Bible, Sarah, Abraham’s wife conceived when she was 90 yrs old. It could be a miracle.

In the modern wolrd many such incests happening secretly. But this is a rare story. When Human beings mate like animals anything can happen. This is also not different from animal behaviour.

The children of incestuous relationships were regarded as illegimate, and are still so regarded in some societies today. In most cases, the parents did not have the option to marry to remove that status, as incestuous marriages were and are normally also prohibited. (wikipedia) 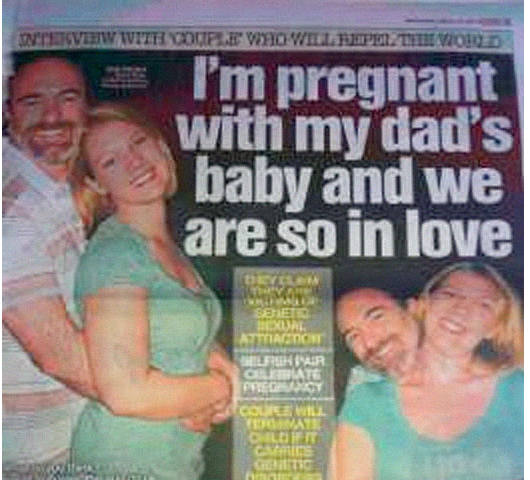 Discussing GSA, Lawrence explained: “I did some research into it. I was stunned that some brothers and sisters, daughters and dads and mothers and sons were actually living happily as man and wife.” However, her father pointed out: “GSA isn’t recognized in court.”

I know we shouldn’t judge but I do find this disturbing.

A story from The Irish Sun shows what happened when a father and daughter were reunited after many years;

Penny Lawrence went in search of her father Gerry Ryan following the death of her mother and grandparents. The Irish Sun reports that she eventually found Dublin-born Ryan in Houston, Texas.

After meeting, the pair began a couples relationship which resulted in Lawrence becoming pregnant. However, they have insisted that their attraction is the result of Genetic Sexual Attraction, a term previously created by Barbara Gonyo to describe the feelings between parents and their children – as well as siblings – who meet as adults.

“We are not committing ******, but are victims of GSA,” Lawrence told the paper. “We’ve never experienced a father-daughter relationship, so we’re just like any other strangers who meet in adulthood.”

Ryan expressed fears that laws could see the couple separated, but added: “It’s no different than if I met Penny in a bar. I’d have fallen for her as I have now. It doesn’t feel [like] we are doing anything wrong.”

Health:Common Cold Infographic: What You Need to K...
How To Set Up a Budget
RELIGION: ‘Is it permissible for Muslims to celebr...
Terrifying: Colleen Stan, ‘The Girl in the B...

ENTERTAINMENT: Kim Kardashian, Famous Of Being Fam...
Buddhist monk sets himself on fire to protest agai...
10 Stars Who Doesn’t Really Aged
Against All Odds: A 62-year-old Woman married Sout...

ENTERTAINMENT: Kim Kardashian, Famous Of Being Fam...
Buddhist monk sets himself on fire to protest agai...
10 Stars Who Doesn’t Really Aged
Against All Odds: A 62-year-old Woman married Sout...