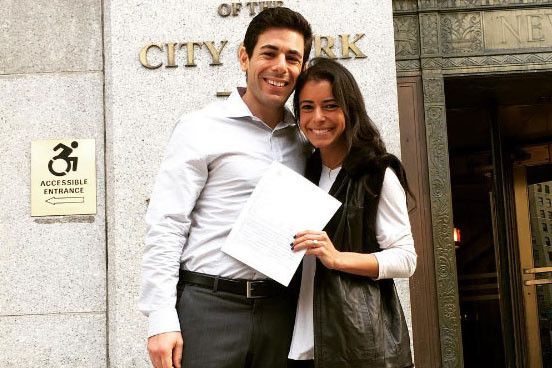 A Manhattan couple are between a rock and a hard place.

Bradley Moss and Amy Bzura were scheduled to walk down the aisle last month, but never made it to the altar.

Now the jilted groom wants the $125,000 engagement ring back, but his ex-fiancée vows she won’t return the sparkler, according to a suit filed in Manhattan Supreme Court.

Moss, 31, and Bzura, 27, began dating in June 2012 and lived together on the East Side for more than three years. On Nov. 7, 2015, Moss proposed to Bzura and she accepted, the court papers said. To her delight, he presented her with a square emerald-cut diamond engagement ring.

The handsome couple, who registered at Bloomingdale’s, were to be married Oct. 29.

Friends and family showered the couple with gifts from Vera Wang champagne flutes to Baccarat vases.

One of Bzura’s friends posted an Instagram photo gushing, “Literally dying to be a real bridesmaid of Amy [and Brad’s] wedding! See you 10/29/16 #amysthemoss.”

A week before the nuptials were scheduled, Bzura beamed on social media that she could not wait to be Mrs. Moss. She also posted to her Instagram: “I can’t wait to be your nagging and annoying Jewish wife. You mean everything to me and I can’t wait to say ‘I do’ and make you the happiest man in 2016!”

But for reasons not explained in the suit, “the marriage did not occur.”

Court documents do not detail why the wedding was cancelled and the engagement was broken, but Moss demanded the return of the ring in early November. According to the Post, “the suit calls for the return of the ring, or its value in cash, with interest, along with punitive damages determined by the court.”

FindLaw, an online legal resource, points out that relevant gift-giving laws are determined state by state, and most states have adopted a no-fault approach to determining if a betrothed must return an engagement ring. Which means the courts in these states don’t like to get caught up in the whys and wherefores: “They view the relationship as private and therefore none of their business. If the engagement is broken, the giver gets the ring back, regardless of who or why.” That could be bad news for Amy Bzura, as New York is one of these states.

On Nov. 3, Moss wrote Bzura a letter demanding she return the rock. But she “has willfully and maliciously refused,” the suit says.

The suit calls for the return of the ring, or its value in cash, with interest, along with punitive damages determined by the court.

Moss, who hails from Woodbury, LI, runs a pipe supply company based out of Lyndhurst, NJ, according to his LinkedIn page. He’s a fitness enthusiast who has run marathons.

Both Moss and Bzura, an advertising professional formerly of Marlboro, NJ, refused to comment.

Travel: 18 Spectacular Places You Wouldn’t Believe Are In Pakistan

10 Most Inspirational Athletes With Prosthetic Limbs