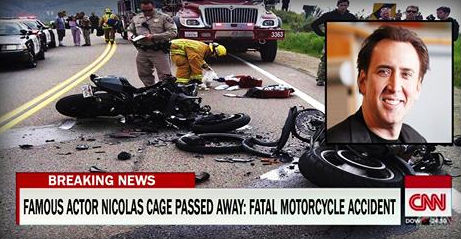 Several sites have been parading headlines about the death of Hollywood actor Nicolas Cage at the age of 52. They claimed that the actor died because of a “serious motorcycle accident.”

A false rumor holding that actor Nicolas Cage passed away in a motorcycle accident circulated in July 2016. ORIGIN:A message reporting that actor Nicolas Cage had died in a motorcycle accident was widely circulated on Facebook in July 2016: According to Snopes.com, this graphic includes conflicting claims: The title of the message asserts that Nicolas Cage passed away in a motorcycle accident, but the text of the quoted article states that the actor died from a skiing accident after being air-lifted by a ski patrol to a local hospital.

In fact, the portion of this hoax relating to a ski accident has been circulating for several years. In 2013 the web site Global Associated News, a site known for publishing death hoaxes, falsely claimed that Cage has perished in a snowboarding accident:

Witnesses indicate that Nicholas Cage lost control of his snowboard and struck a tree at a high rate of speed. Nicholas Cage was air lifted by ski patrol teams to a local hospital, however, it is believed that the actor died instantly from the impact of the crash. The actor was wearing a helmet at the time of the accident and drugs and alcohol do not appear to have played any part in his death,” the report reads.

This hoax was also circulated with another image purportedly showing the scene of the crash:

The false rumor claiming that Nicolas Cage had passed away in a motorcycle accident was started by the web site Viralvines.site. This site has been responsible for a string of death hoaxes which have recently “killed” a variety of celebrities, including wrestler John Cena and Vin Diesel:

Snopes.com has busted this part of the Cage death hoax as well. The site discovered that the photo in the graphic is actually that of a real motorcycle accident in 2011 that led to the death of a  22-year-old Navy sailor’s death.

As of posting, Cage is very much alive. Nicolas Cage did not die in a motorcycle accident (or a snowboarding accident) in July 2016, although  he was recently in the headlines after getting involved in a brawl with Motley Crue singer Vince Neil in Las Vegas, which led to the singer facing jail time.

Only In Dubai: 22 Luxurious Vehicles
RELIGION: ‘Is it permissible for Muslims to celebr...
My Baby You by Marc Anthony Lyrics
PALMISTRY: HOW YOUR FINGER SHAPE DETERMINES YOUR P...