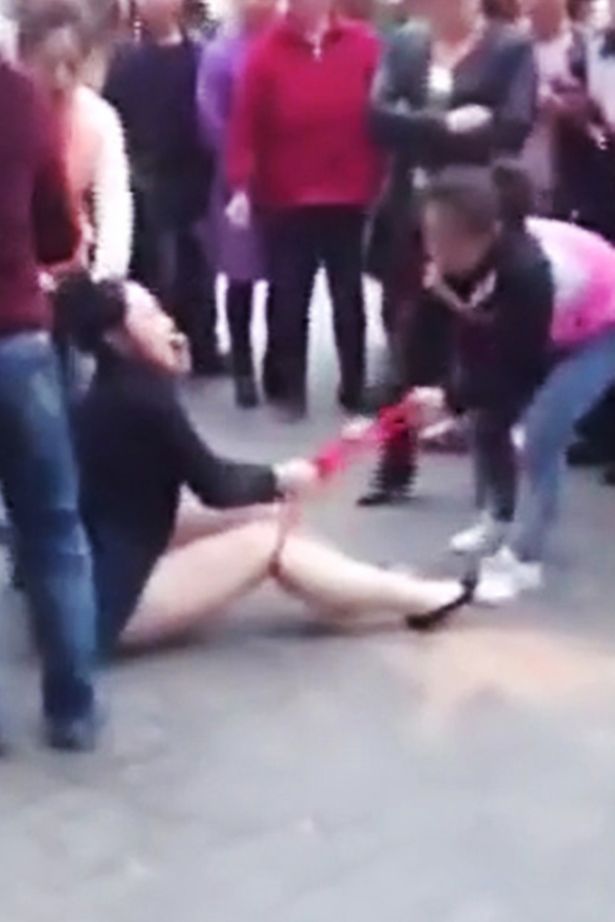 Shocking: The humiliating attack was filmed and shared on social media

Shocking footage shows a gang of angry wives attacking an alleged mistress who slept with one of their husbands.

The video of the woman being beaten before having her underwear pulled off in front of a crowd of shoppers was then shared on social media.

The incident, in northern China’s Shanxi Province, at the entrance of the shopping mall in Datong City, is part of a growing trend of public attacks against love rivalsbeing shared online.

The latest taped attack shows a woman struck, pulled by her hair then dumped to the floor while dozens either look on or film the assault.

Yet although bystanders happily record the incident, no one steps in to help – not even the police who said they had not received a complaint and therefore could not investigate.

In another incident in Wenzhou City, in China’s Zhejiang Province, a woman was also filmed having a tile smashed over her head.

In this video, a woman is surrounded by an angry group, who are thought to be friends of the wife.

Public shaming and beating of mistresses is becoming common in China, as wives take matters into their own hands and dish out so called ‘civil justice’.

Married shopper Zhu Feng, 35, said: “It serves these girls right, they ought to be exposed in public. If they try and steal our husbands and we find out, they know what is coming. They deserve to be taught a lesson and to leave our husband’s alone.”