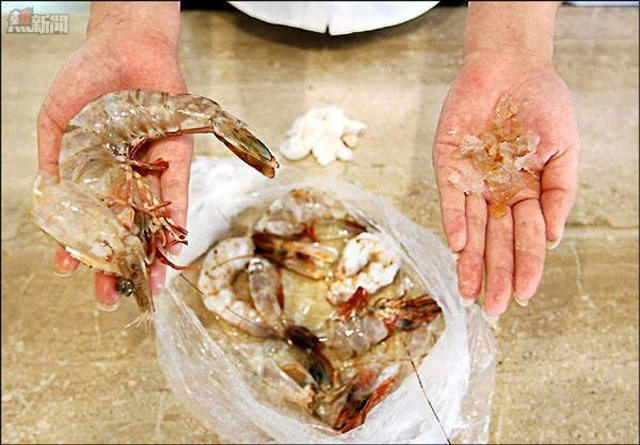 VIDEO Translation. Video at Cà Mau April 26. 2016:
Rough Translation: they are injecting the shrimp with agar (algae based gelatin, sugar (gluco) and CMC. They say to be competitive they have to increase the shrimp weight by 15%-20%, and that her competitors are also doing this.
Note: CMC -Carboxymethyl Cellulose is the last ingredient used in the injection process along with Agar and Sugar.
* CMC is used in food under the E number E466 as a viscosity modifier or thickener, and to stabilize emulsions in various products including ice cream. It is also a constituent of many non-food products, such as toothpaste, laxatives, diet pills, water-based paints, detergents, textile sizing, and various paper products. It is used primarily because it has high viscosity, is nontoxic, and is generally considered to be hypoallergenic as the major source fiber is either softwood pulp or cotton linter.
Reporter: 1. This facility invested a system with (30) impurities pumps 2. Impurities will be turning into the middle, head and tail of Tiger shrimp 3. One kilogram of Tiger shrimp after injected will be increased the weight becomes 1.150grs or 1.200grs (15%-20-%) 4. At the same time, the size of the shrimp has increased, looking fresh and the price will be more higher

Lady ( Facility Owner ) 1. Every day, I bought about 30-50kg of shrimps, after injected the impurities, then I sold for export seafood companies in Ca Mau. So, I have to do like that, because of all local shrimp supplies they do like this.
Reporter: 5. According to the owner testimony, they got impurities from China and product name is CMC. 6. Packaging: product of China 7. CNC dissolved in water, creating a material very thick like this. 8. then pour into the mixer until soft and smooth and this is the finished product is pumped into shrimps 9. impurity was added to a container, then use high-pressure compressor moved to each pump. Just squeezed like this, the impurities will follow the pipe going to shrimp pump. 10. Materials injecting into the shrimp usually such as Agar-Agar powder, gluco and CNC, but no one knows what is the CMC? 11. If you look shrimp tails rise up, that mean they did injected impurities. (AVESOR)

Following reports of pond water meat, bleach-soaked pigs’ feet and fake duck blood products, we now have to worry about steering clear of gelatin-filled shrimp. Yes, a vendor in Zhejiang is now under investigation after the tiny crustaceans at his shop were found to be injected with gelatin. Euuuugh.

The shrimps were recently purchased in a market in Wenzhou. The buyer, surnamed Zheng, said she saw a blob of jello-like substance fall off from the head and body of the shrimps. Uncertain whether it was edible, Zheng did not dare to try it.

She exposed the story to the media, and the case soon came to the attention of authorities, who are now conducting investigations.

Some netizens believe the unidentified product is gelatin, while others worry that it might be adhesive plastic glass.

The vendor who sold the shrimp claimed that he has never encountered such a situation and doesn’t know the material may be, explaining that the seafood products were bought from another retailer. He has been taken in by police for investigation.

Some seafood vendors revealed that after a frozen shrimp is defrosted, the body tends to become dry and flat, and so some sellers inject gelatin inside to give it a better presentation and increase the weight.

In China, the Curious Case of the Gel-Injected Shrimp

A Chinese vendor sells shrimp and prawns at a wet market in Beijing on July 19, 2007. (Teh Eng Koon/Getty Images)

Such gel, the presence of which is not typically detectable upon superficial inspection, is injected some time between when the shrimp are caught and when they’re sold, in order to add weight and thus earn a greater profit. Shrimp sold live have not been injected, because the injection would kill the shrimp.

Chinese food authorities have not been particularly active in pursuing the cases brought to their attention, according to interviews and news reports, and there is not even a consensus at which point in the production line the operation takes place.

Seafood is sold by factories, even we merchants don’t know which set of goods is injected with gel.
— A seafood merchant in Beijing
China is the third largest exporter of seafood to the United States, and it also exports significant amounts of shrimp and catfish, representing 2 of the 10 most consumed seafood products in the country. Nearly $150 million worth of shrimp were imported from China between January and October 2015, according to data by the U.S. Census Bureau.
The problem of adulterated shrimp has persisted for over a decade, despite new cases regularly reported in the Chinese press. Some of the first well-publicized cases of the gel-injected shrimp appeared in 2005, the same year in which the municipal government of Tianjin launched a strike-hard campaign against shrimp injectors. The report, which referred to the campaign gave no details about how many were arrested, or whether the shrimp adulteration rings were broken.

It is unclear how much, or if any of the gel-injected shrimp make their way to these shores, but food safety experts said there is reason to be concerned. The Food and Drug Administration issued an import alert on Dec. 11, 2015, about the “presence of new animals drugs and/or unsafe food additives” from seafood imported in China, including shrimp.

An Unwelcome Gelatinous Addition
In some of the cases that have been examined—not always an easy task in China—the gelatin found in the shrimp was the innocuous, edible kind. It is usually extracted from animal skins and bones, and composed of collagen. But because the operation is illegal and unsupervised, there is no telling whether the next gel used will be industrial.

Wu Wenhui, a professor at Shanghai Ocean University, said in an interview in the Chinese press that customers should be wary about industrial gel ending up in shrimp, given that it’s cheaper than the edible version. “Industrial gel is used for furniture, print, and contains many heavy metals such as lead and mercury, which harms the liver and blood, and is even carcinogenic.”

But the act of injection is itself potentially unsafe.

“Even if what was injected was edible gel, which may not itself be harmful, who can guarantee that the process is aseptic? ” said Liu Huiping, a member of the executive council of the Tianjin aquatic products association, in an interview with the Beijing News.

Mr. Zhang, a seafood merchant in Shandong Province told Chinese media that large shrimp such as Penaeus and tiger prawns, which are mostly imported from Southeast Asia, are candidates for injection because of their size. “Their individual prices are high, and more money could be extracted from adding to their weight.”

Why It Continues
The scandal of injecting shrimp has been known, and has persisted, for over a decade.

Commentary articles in the Beijing Youth Daily point out that this scandal exposes the ineffectiveness of China’s food regulation system. According to these articles, there are too many departments and an unclear division of labor. With poor cooperation between the departments, holes in regulations easily emerge. Even with the reorganization of the State Food and Drug Administration in 2013, the situation hasn’t improved.

There appears to be a lack of will to solve the problem. An investigation by Beijing News was revealing. Cui Hongtao, the deputy director of administration for industry and commerce in the seaport of Tianjin told Beijing News that the administration for Industry and Commerce only accepts products for investigation that have already failed the Agricultural Department’s examination.

They will get less than 2% of what’s coming in, so importers will take their chances sometimes. … They might try to send in something that’s not okay.
— Patty Lovera, assistant director, U.S.-based Food & Water Watch
The journalist then took shrimp to several Agricultural Department offices, and was told that the examination could not be conducted without a clear objective, otherwise they “don’t know where to start.”

But the examination of injected shrimp is not complicated. Cui Chunming, deputy director of the Tianjin Sanitation Supervision Department, told Beijing News, ‘There is no need for examination, because you can tell whether there has been an injection with your own eyes. Regardless of what’s being injected, it is not allowed, and the adulterating is illegal behavior.”

A rough picture emerges in which greed trumps morality, and the state is ineffective or worse in responding.

Wholesalers or retailers see the chance to increase their profits by injecting shrimp, and are willing to cheat—and possibly endanger the health of consumers—in this way. Even if retailers aren’t involved in injecting shrimp, they know when they are receiving adulterated goods from the wholesalers. But they accept them and pass them onto their customers. China’s food regulators are unable or unwilling to put a stop to all this.

U.S. Options
Patty Lovera, assistant director of the U.S.-based Food & Water Watch, thinks American customers should be concerned about shrimp from China, “We do know that they are struggling with food safety regulation in China, and there are constant stories written about food safety problems,” said Lovera in a phone interview. “Our FDA, they have an office in China, but they don’t get out very much to do a lot of inspections. A couple hundred inspections a year is nothing compared to how many food operations are out there.”

Lovera also mentioned the FDA’s lack of manpower for inspecting food imports. “They don’t have very much inspection at the border here when it’s coming in. They will get less than 2 percent of what’s coming in, so importers will take their chances sometimes. … They might try to send in something that’s not okay.”

Photography: Beauty is in the Light of the Heart
Flower: The Photos of the Worst Smelling Flowers ...
Amazing Pedestrian And Suspended Bicycle Path Bri...
Boxing Legend Muhammad Ali Dies at 74

Photography: Beauty is in the Light of the Heart
Flower: The Photos of the Worst Smelling Flowers ...
Amazing Pedestrian And Suspended Bicycle Path Bri...
Boxing Legend Muhammad Ali Dies at 74