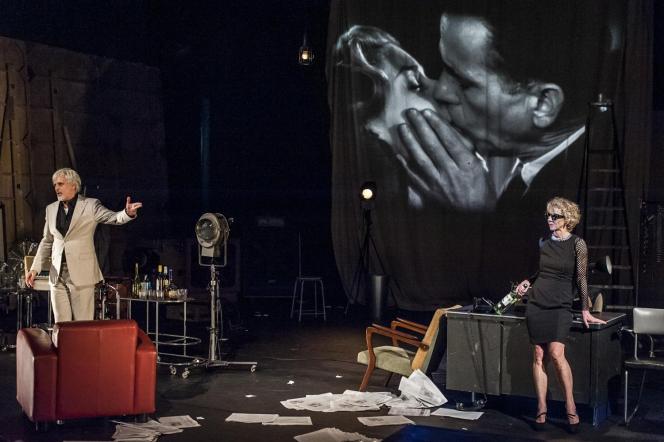 New York legend: The crime of passion and subsequent marriage was documented in 2007’s ‘Crazy Love’

Dan Klores’ Crazy Love tells the astonishing story of the obsessive roller-coaster relationship of Burt and Linda Pugach, which shocked the nation during the summer of 1959.

Their obsessive roller-coaster relationship and his crime of passion have become one of the most famous love-related New York City crime stories.

They may be in love, but there doesn’t appear to be anything crazy about it – except it was Burt who hired the thugs that blinded Linda.

The lurid nature of the crime was enough to make national headlines. But the ensuing trial in 1961 – which included a lengthy sanity hearing for Pugach – turned the case into a veritable media circus.

24 January 2013, Linda Pugach, whose whirlwind ‘fairy tale romance’ with Burt Pugach became the subject of the 2007 documentary ‘Crazy Love,’ died at the age of 75 in Queens, New York. 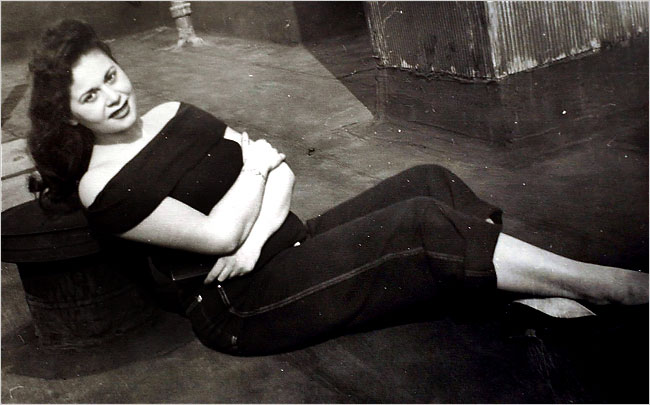 Delving deeper into the dimmest parts of the human psyche, Crazy Love, which criminally understates the nature of the relationship between Burt Pugach and the late Linda Riss, a fantastically dysfunctional New York couple, whose relationship has spanned a 50-60 year period. It starts with their affair (Burt was married when he first met Linda) in 1959 and begins a gruesome trajectory when the beautiful Linda is permanently disfigured by lye in 1960, after thugs hired by a jealous Burt attack her in her home. This, however, does not spell the end to their twisted liaison, when the seemingly unthinkable happens in 1974.

Their obsessive roller-coaster relationship and his crime of passion have become one of the most famous love-related New York City crime stories.

In 1957, Burt Pugach , charming and talkative, with an impish, low-key sense of humor, was a successful 30-something-year-old lawyer in New York City. He was driving with a buddy in the Bronx one day, when he saw a gorgeous young woman sitting on a bench. He practically jumped out of the moving car to introduce himself to the beauty. Linda Riss was 21-year-old, is a feisty, stylish woman and a kind-hearted girl from Bronx who was carrying on with Burt Pugach, who was married to another woman.

The Times said that Ms Riss had all the beauty and charm of the winsome Elizabeth Taylor, instantly ensnaring the young woman.

In 1959,overwhelmed  by his wealth and charm, as a naïve young woman, Linda was charmed by his affection. Linda dine and wine with him, much to the delight of her lower middle class family. Burt took her to the hottest clubs in New York City, showing her off to his jealous friends. Linda became absolutely smitten with the adoring older man. 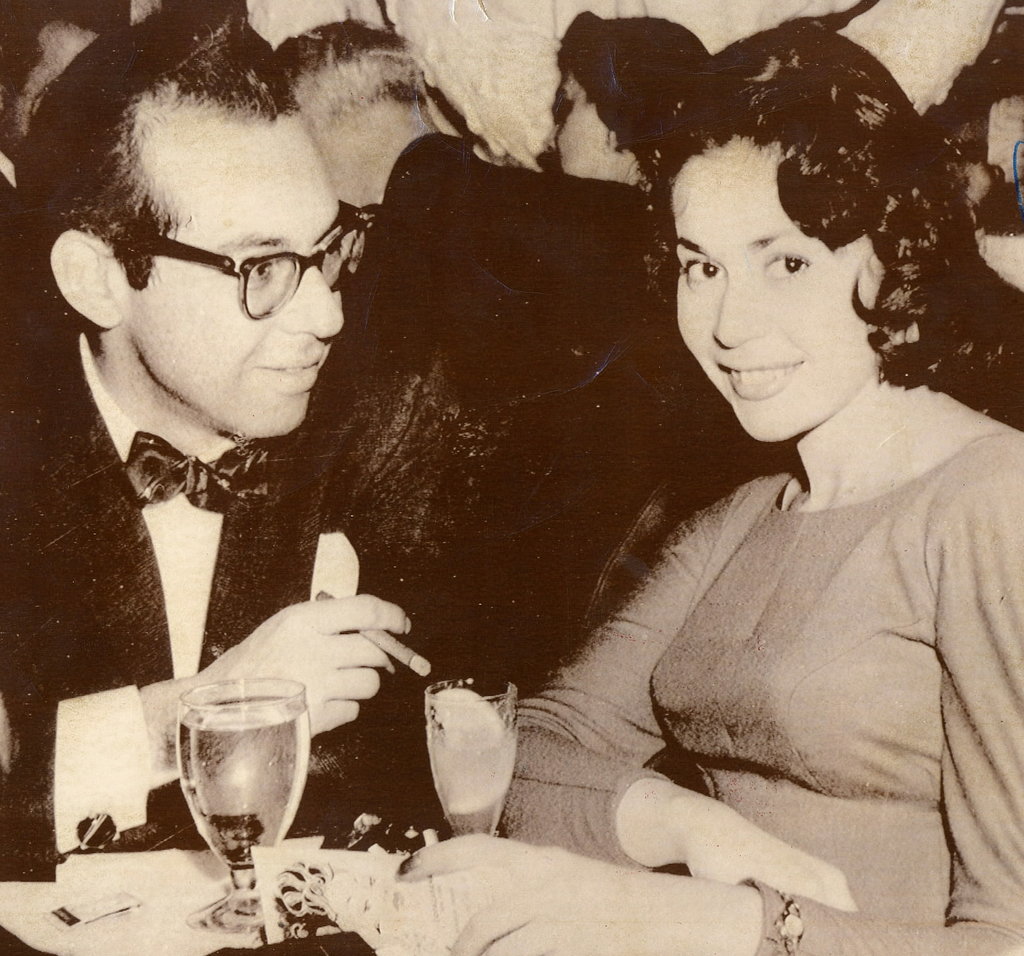 Mr. Pugach with Linda Riss at the Copacabana in 1957, before the attack that blinded her and sent him to jail for 14 years. (photo source: www.nytimes.com)

But his doting soon turned to stalking, and he would often drive her to work, coming back hours later to take her to lunch, drove her home, and finally take her out to dinner.

Linda’s world was shattered when she found out that Burt was married with a daughter. She was heart-broken and disgusted. She broke off their relationship. Burt begged her to come back to him and even showed her some divorce papers to prove he was leaving his wife. 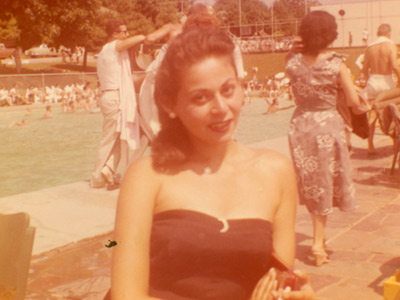 Linda was about to relent, because she loved Burt, but then her family’s lawyer discovered that the divorce papers were fake. Linda became indignant when Burt’s many promises to leave his wife went unfulfilled. So, Linda broke things off with Burt for good. 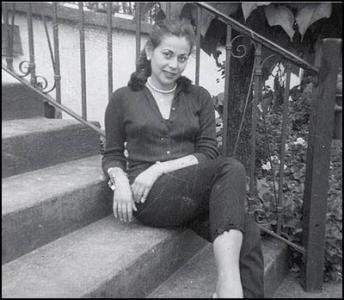 Burt then threatened to kill or hurt her.Linda was frightened and went to the police several times. She reported the threat to the New York Police Department to no avail.  But 1959 was a time before stalking laws were in place. The police shrugged off the incidents and told Linda there was nothing she could do.

He told The Associated Press that theirs was a ‘fairy tale romance.’ Pugach is escorted from prison after he slit his wrist in 1959.

Meanwhile, Linda tried desperately to move on with her life. She was briefly engaged to  very handsome young man Larry Schwartz, a man she met in Florida.

Upon hearing of her engagement to Larry Schwartz, Pugach was livid. Overwhelmed by jealousy and hatred, he hired three assailants to attack Riss. One afternoon, the doorbell rang at Linda’s apartment. Linda’s mom answered it and called out to her daughter that it was a deliverymen with a wedding package.

When Linda came into the doorway, the assailants threw lye in Riss’s face. The 23-year-old beauty was rushed to the hospital in an ambulance and was there for several days. The acid trowing left her blind in one eye, nearly blind in the other,spent the remainder of her life wearing thick black glasses and permanently scarred.

The incident made national news. Burt was the most hated man in America that year. Despite the sympathy pouring in from millions of people, Linda’s life was destroyed.

Her fiance broke off their engagement because he simply couldn’t afford to take care of her, now that she was visually handicapped.

For the rest of her 20s, Linda dated various men, but the relationships all ended when she took off her sunglasses and revealed the horror underneath.

Burt was convicted of the crime and spent 14 years in prison, during which time he continually wrote to Riss. His conviction also meant that he was disbarred.

In March,1974, Burt granted parole after he served out most of his term in Attica. He worked as paralegal.

When Burt released from prison, he  immediately contacted Linda, desperate to see her in person. Linda , although against her better judgement, she agreed to see  Burt for dinner. And there, he apologized for ruining her life. Linda felt Burt’s sincerity and she knew how much he truly loved her. Linda, lonely and living in squalor, accepted his apology despite the fact that she hated him for what he had done. They began dating again that September, and on several television appearances that fall, Burt proposed marriage to the woman whose maiming he ordered.

Burt had tried to get reinstated into the New York Bar Association in March,1974. According to news reports at the time, Linda joined his petition.

Eventually, Linda accepted the proposal. Their marriage appeared to be oddly blissful until 1997, when a young woman accused Burt of threatening her life. Although Linda was hurt when she discovered her husband had been having an affair with the woman, she was a character witness during the trial, stating her husband wouldn’t harm a fly.

A 1974 photo of Linda and Burt Pugach, the subjects of the documentary “Crazy Love.” Credit Magnolia Pictures and Shoot the Moon Productions (www.nytimes.com)

In 1997 Burt was once again accused of threatening a woman with whom he was having an affair. His wife, Linda, appeared at his trial as a character witness for him. It worked, because he was found innocent.

He said that he didn’t know why the blinded woman agreed to see him again, let alone become his bride. ‘You won’t believe it, but she won’t tell me (why),’ he told reporters at the time.

‘She’s got to have her secrets too.’

The two were married in a civil ceremony, wearing a yellow turtleneck sweater and her signature dark glasses.

‘I’m very happy we got married today,’ she told newspapers at the time. ‘What else can I say?’ Their marriage shocked the entire nation. They were the subject of every talk show, news report, and magazine article in the country that year.

Linda’s family and friends were appalled. But Linda saw it a different way. She felt she finally had a man who still thought she was beautiful, despite the physical damage he had caused. Plus, what better payback than to force him to see what he had done every single day for the rest of his life?

Burt told the Washington Post six years after they married that hate did not serve a purpose in her life. ‘You can’t go back. You can only go forward. If you just hate, well, hate is the closest thing to love, I think.’

Speaking from their Queens apartment, Burt added that all married couples experienced difficulties. ‘But no matter what kind of quarrels we’ve had,’ he said, ‘she’s never thrown (the incident) in my face.’

The wife, with her thick black glasses and largely teased hair, cited the former relationships between countries like Germany and Japan, that once were in the throes of war, but were now operating in peace.

Burt, 85, told the Times on Wednesday that he never gave the order for men to throw lye at her, adding that he had only asked for them to ‘beat her up, to try and get her back.’ He added that his wife fell ill in December, days before they were set to fly to Boca Raton, Florida in hopes of buying a condo.

Linda Pugach was being laid to rest in a crypt in Paramus, New Jersey next Thursday.

‘There’s a place for me there. We’ll be together,’ Burt told the Associated Press today. 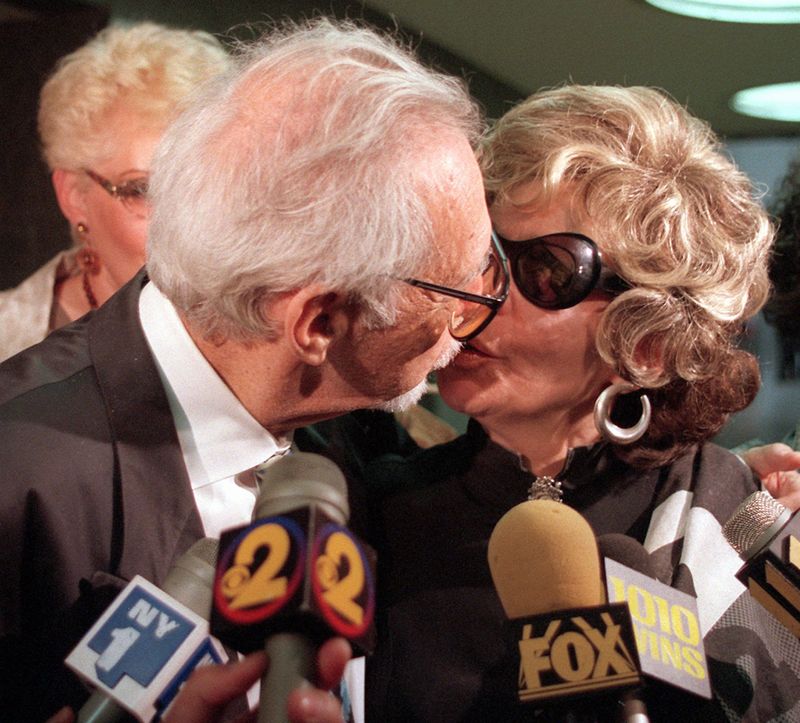 Burt and Linda Pugach attend the premiere after party for Crazy Love in New York in 2007.

BEAUTY: How To Remove Blackheads And Keep Them Gone

ARCHITECTURE: Houses Designed Based On Local Needs...
We have to proclaim that every human being is equa...
Most Beautiful Flowers
VIRAL PEOPLE: Angelica Kenova, Living Like A Doll ...

ARCHITECTURE: Houses Designed Based On Local Needs...
We have to proclaim that every human being is equa...
Most Beautiful Flowers
VIRAL PEOPLE: Angelica Kenova, Living Like A Doll ...