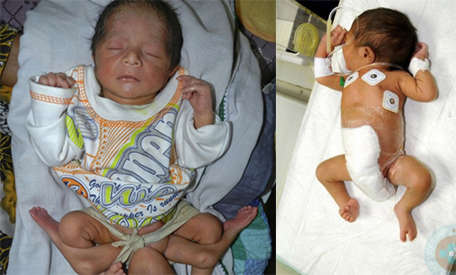 A baby boy born with six legs has had a successful operation to remove his four extra limbs, doctors said today.

The youngster from Karachi in Pakistan was believed to have had a parasitic twin, which had not developed properly in the womb, resulting in the extra legs. Doctors examined MRI, blood tests, and CT scans before deciding to operate on the boy Critical: Doctors in Pakistan are fighting to save the life of the baby boy who was born last week with six legs because of a rare genetic condition

A team of five doctors had fought to save the boy’s life at the National Institute of Child Health in Karachi.

The head of the NICH, Jamal Raza, said the abnormal birth was the result of a genetic disease which would affect only one in a million or more babies.

‘It was strange that apparently an abnormal baby with six legs was as normal as other children,’ he said.

Before surgeons could operate they said they had to work out which of the limbs belonged to the boy and which to his twin.

Doctors examined MRI, blood tests and CT scan reports before deciding to perform the surgery. The operation lasted eight-hours and was performed in stages.

The baby had been in an intensive care unit ward since he was born last week to the wife of an X-ray technician.

Imran Shaikh, the baby’s father who lives in Sukkur, said he was grateful his son was treated.

‘We are a poor family. I am thankful to the government and doctors for helping us successful operating my baby,’ he said. Medical marvel: Since Shaikh made his public plea for help, the Sindh Governor has come forward and directed officials concerned to make sure the child receives all the medical care he needs Aid: Since the father of the baby made his public plea for help, the Sindh Governor has come forward and directed officials concerned to make sure the child receives all the medical care he needs

Shaikh and his wife of four years live in Sukkur, around 280 miles north of where his son is being cared for. His wife is reported to be recovering well from the birth and in a good state of health.

His wife – who is also his cousin – has been unable to travel because she had a caesarean section delivery.

He said they were planning on naming their son Umar Farooq.

The Sindh provincial health department said they were examining if he needed any further treatment to live a normal life.

A parasitic twin is sometimes referred to as an asymmetrical or unequal conjoined twin.

It occurs when a twin embryo begins developing in utero, but the pair does not fully separate.

One embryo continues developing at the expense of the other (the parasitic) which will rely on the body of the other for blood supply and organ function.

It is incompletely developed and dependent on the other twin. The independent twin is called the autosite.

In some cases the body of one twin absorbs the other during development, known as fetus in fetu.

In January a boy in Peru was operated on to remove his parasitic twin from his stomach.

THE POWER OF LOVE (POEM)
A world apart: 2 women with birthdates in 1800s st...
(Love Moves In) Mysterious Ways Lyrics
Being a Woman Is Priceless

TRAVEL: Ma’dan, The Lost Culture and The ...
10 Tips on How To Get Rid Of Colds and Blocked Nos...
Guy Brutalises Woman After She Asked Him to Stop G...
HEALTH EDUCATION: ‘Holy Water’ Costing...

TRAVEL: Ma’dan, The Lost Culture and The ...
10 Tips on How To Get Rid Of Colds and Blocked Nos...
Guy Brutalises Woman After She Asked Him to Stop G...
HEALTH EDUCATION: ‘Holy Water’ Costing...