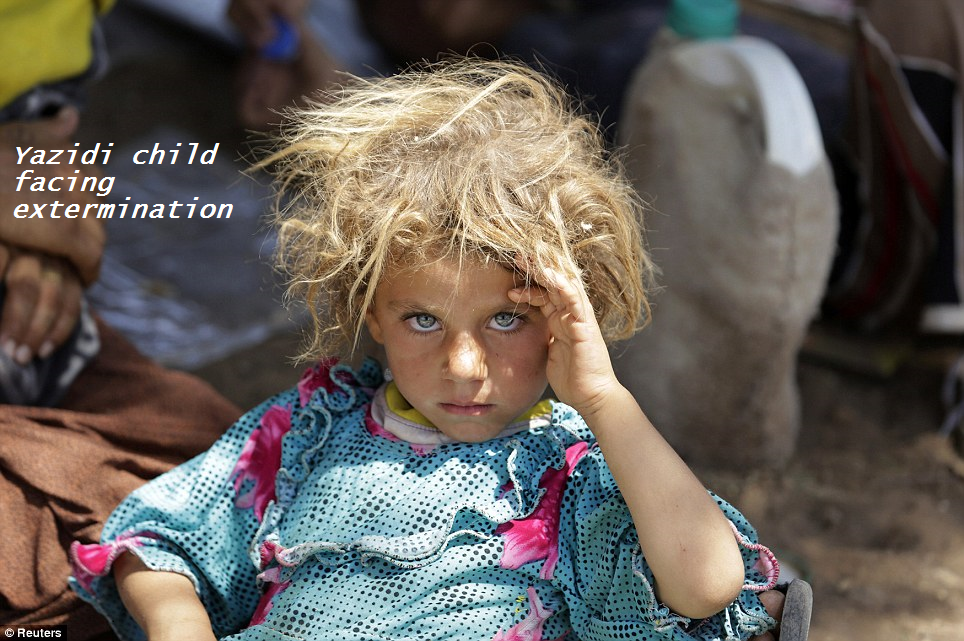 The Kurdish people,  and the Yazidi in particular, have in fact been battling the Semitic menace since time immemorial. They have seen their families massacred, wives raped, children beheaded, communities  destroyed, and lives ruined by Islamists .

The Kurds, specifically the Yazidi, unlike their Arab and Islamic oppressors, are Indo-European people.  This is actually a major component of why ISIS and Islamic fundamentalists from London to Karachi, hate them as they do. They view them as white.

Remember, one does not have to be blonde-haired and blue-eyed to be of Indo-European racial origin. The Kurds in fact are one of the few people living in the lands between Iran and Europe that have Indo-European bloodlines.  EKP discussed why ISIS hates the Yazidi as they do.

Indo-European and Aryan man has always been at war with Semitism-whether religion or ethnic based. The Kurds and Yazidi personify this struggle. The reason why ISIS hates the Yazidi as they do.

In fact the mainstream Daily Mail reported that,

“Fears are growing for the 300 Yazidi women reportedly kidnapped by Islamic State fighters last week amid claims they would be used to bear children to break up the ancient unusual groups bloodline.

The minority group is originally Aryan and has retained ethnically Indo-European phenotype, even on occasion light hair and eyes, by only marrying within the community.

But in a furious bid to convert all non-Muslims, ISIS jihadists have vowed to impregnate the hostages.

Some 45,000 Yazidi refugees have finally been able to escape from Mount Sinjar after U.S. air strikes and a fightback by Kurdish forces appeared to have broken the ten-day siege by Islamic militants.

However, as the women remain trapped, Kurdish militia are calling on Western forces to give them arms rather than plotting rescue missions.

Addressing the kidnapping, Adnan Kochar, chairman of the Kurdish Cultural Centre in London, told MailOnline: ‘The Kurds and Yazidis are originally Aryans (Indo-Europeans) but because the Yazidis are such a closed community they have retained a fairer complexion, blonder hair and bluer eyes.

‘ISIS have taken around 300 women from Sinjar to give to jihadists to marry and make pregnant to have a Muslim child. If they can’t kill all Yazidis, they will try to smas what they perceive is a white and blonde bloodline.’

According to reports, a small band of Iraqis stranded on the barren mountain top are apparently either too scared or too proud to come down.

U.S. officials claim some Yazidis have indicated to American forces tasked with rescuing them that they see the mountain as a safe haven and were reluctant to leave.

The Yazidis adhere to a 4,000-year-old faith passed down and adapted through the generations by word of mouth and composed of elements of several religions.

But they are unjustly regarded as ‘devil worshippers’ on account of their unusual beliefs, which derive from the ancient faith called Zoroastrianism, the religion of Persia long before Islam arrived.

Successive waves of persecution – they claim to have survived 72 genocides – by the Ottoman Turkish rulers of what is now Iraq, by Saddam Hussein and now by Islamic militants, have reduced the number of Yazidi from millions to an estimated 700,000.

Mr Kochar, who was born in Kurdistan, said his great-grandfather was once a Yazidi, but was forced to convert to Islam during an uprising 150 years ago.

The ten-day stand-off at the mountain by ISIS appears to have been crushed after U.S. bomb drops and a fightback by Kurdish forces allowed nearly 45,000 refugees to escape.

But the swelling number of displaced Iraqis has forced the United Nations to declare its highest level of emergency to tackle the humanitarian crisis.

GENOCIDE IN A NUTSHELL

Philippine Medicinal Herbs: Aratiles / Muntingia ...
In the Innocence of a Child (With 20 Pictures of L...
Personality: Hair, The Richest Ornament Of Women a...
HEALTH: Home Remedies for Oily Scalp, Dry Scalp a...

Unconditional Mother's Love: I Love You and I Wish You Enough