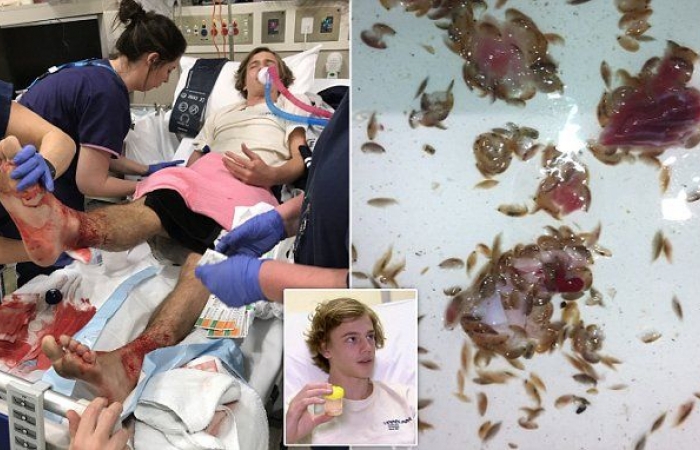 The story of the boy with the bloody feet went round the world, with the Kanizays hearing from relatives who saw news reports in Slovenia, while it also made headlines in Norway, Sweden and Tanzania.

“It’s great that people are being educated along the way – educated and I guess entertained,” Mr Kanizay said. (Perth Now.Com) Sam Kanizay, 16, found his feet and ankles covered in blood after soaking his legs in Melbourne’s Brighton Beach on August 5, 2017, Saturday night after a football game.

Sam Kanizay in hospital after he was ‘attacked’ by the sea creatures. Picture: AAP Source Pert now.com

Jarrod Kanizay said his son arrived home with what “looked like a war injury” and that his legs would not stop bleeding.

The family are seeking expert opinion to identify the flesh-eating bugs.

Marine biologists have said they were likely to have been sea fleas, tiny scavenging marine animals.

WARNING: This article contains a close up image of the injury.

After a tiring football game on Saturday evening, the 16-year-old decided to soak his legs in the cold bay near his home.

Speaking to the BBC’s World Update radio show, Sam described feeling pins and needles in his legs after standing waist-deep in dark cold water for about half an hour.

After shaking off what he thought was sand coated around his ankles, he walked across the beach before looking down and realising that his feet were “covered in blood”.

“It bled for ages, and it’s still seeping blood now,” he said. 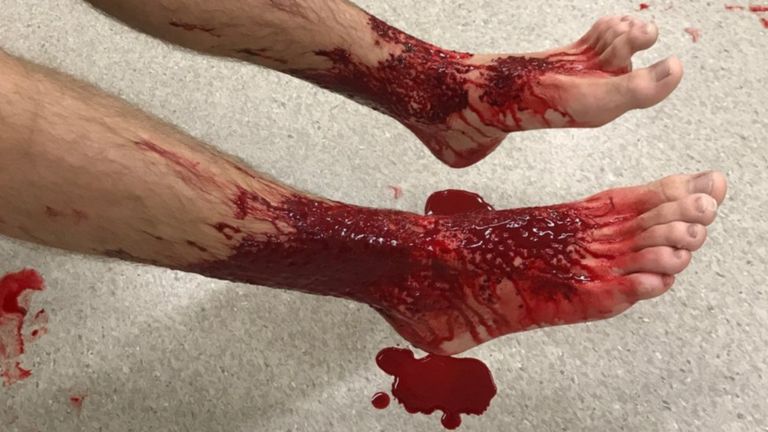 “It looked like a war injury… like a grenade attack. It was really bloody,” his father told BBC News.

“We got him in the shower but as soon as we did that the blood kept re-appearing,” said Mr Kanizay.

“It wasn’t clotting at all. It just kept bleeding and bleeding.”

After two local hospitals could not identify the cause of the multiple pin-prick injuries, the Melbourne father decided to investigate and went back to the beach. 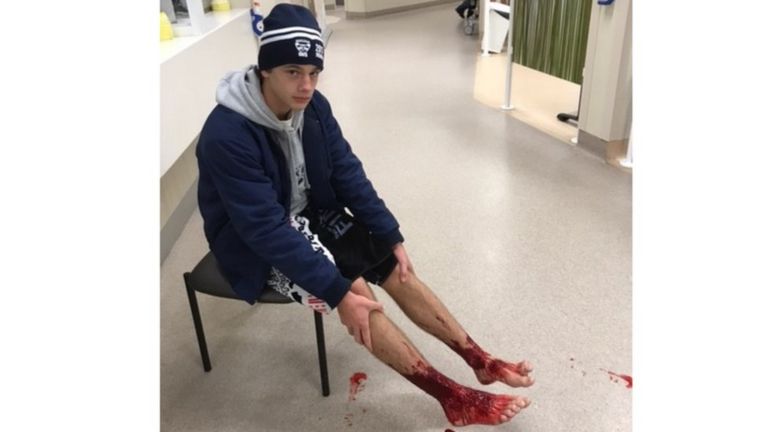 “I collected these strange creatures from the same spot last night by trapping them in a net and standing in the water myself,” he said.

“We got thousands of these little mite-type bugs and they’ve been sent on to experts.”

Mr Kanizay said he hoped the sandy-coloured mites would not scar his son, and he is expected to make a full recovery.

“We are just waiting on the experts to tell us what they are and how they behave and why this happened.”

Marine biologist Dr Genefor Walker-Smith, who saw some of the samples, told Australia’s Herald Sun newspaper that the bugs were probably lysianassid amphipods, or sea fleas.

“It’s possible he disturbed a feeding group but they are generally not out there waiting to attack like piranhas,” she said.

Experts have said such cases are very rare and that there is no reason for alarm. (BBC.com)

Kanizay’s father, Jarrod, told Fairfax Media that his son’s mysterious condition had everyone in the hospital’s emergency room “just fascinated, they were all on Google afterwards, hypothesising as to what happened”. Just be attracted to a little bit of blood. The bites can often go undetected for hours after they attack. Source Normangee Star

We’ve identified sea-creatures that were captured by the father of Sam Kanizay, who was injured on Brighton Beach, as lysianassid amphipods, a type of scavenging crustacean.

Our marine biologist Genefor Walker-Smith examined a sample collected by the family and said the creatures are naturally-occurring scavengers, which commonly bite but do not usually cause these kind of injuries.

It’s possible the amphipods contained an anti-coagulant, which would account for the inability to stop the flowing blood and that the very cold water may be the reason Sam didn’t feel the bites.

The amphipods have no venomous properties and will not cause lasting damage.

Amphipods are sometimes referred to as “sea fleas”. Media reports have described the attackers as “sea lice” but that term is usually used to refer to isopods, a different group of crustaceans. (Facebook)

THE flesh-eating sea lice that savaged the legs of a teenage boy may have been blood-hungry because they were attracted by the full moon, it has emerged.

Experts now say the tiny crustaceans, which usually feast on fish carcasses at the bottom of the ocean floor, are attracted to light, so could have been lured by the full moon.

Sam’s father Jarrod Kanizay said his mother speculated that the full moon may have been to blame for the attack, but his family laughed it off as a superstition. (Express.Co.UK) Woman kept in a shed for six years after parents l...
Congratulations to the Duke and Duchess of Cambrid...
STUNNING SUNRISE IN Asia
Total Lunar Eclipse September 27-28 – Most “...

Pray with a Wakeful Heart and Remember the Almighty with Sincerity

Koi Fish and It’s Meaning, Symbolism and Var...
Education: Different Dangerous Path That School Ch...
The Shape of Your face and Your Personality
Kindness is the sunshine in which virtue grows

Koi Fish and It’s Meaning, Symbolism and Var...
Education: Different Dangerous Path That School Ch...
The Shape of Your face and Your Personality
Kindness is the sunshine in which virtue grows