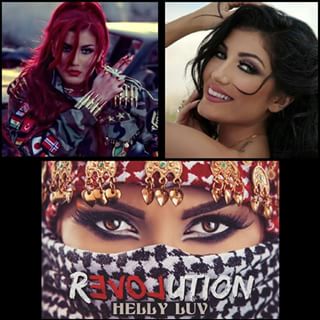 Helen Abdulla, who goes by the name Helly Luv, was born in Iran in 1988.

Grew up under Suddam Hussein before moving to Finland as a child.

Launched career in LA before going back to Middle East for latest song.

Filmed video in town a mile from where Peshmerga are fighting ISIS.

Praised by Kurdish fighter for helping to bring attention to their cause.

Singer Helen Abdulla, who goes by the stage name Helly Luv, was threatened after filming a video in Erbil last year and was included on ISIS’ kill list.

With golden high heels, immaculate makeup and bright red hair, Helen Abdullah is perhaps not your typical Kurdish fighter in the war against Islamic State.

Her only weapons are two miniature assault rifles that adorn rings on her fingers, while it is doubtful that the bullets stitched to her brightly decorated camouflage would be much use in a firefight.

However, performing as Helly Luv, the singer has been praised by Peshmerga forces for her latest music video for bringing attention to their fight against the brutal forces of ISIS.

Abdulla’s anti-Islamic State of Iraq and al-Sham (ISIS) video has garnered more than 742,000 views on YouTube since its May 28, 2015 release.

“I want to give something to the peshmerga because I consider myself one of them,” said Abdulla,according to the National. “The song is called ‘Revolution,’ and I call in it for Kurdistan and the countries of the world to unite to fight terrorism and injustice.”

Twenty-six-year-old Abdulla, who uses the stage name Helly Luv, is based in Los Angeles, but was threatened last year after filming a video in the Iraqi capital of Erbil—and was included on ISIS’ kill list. She again recieved death threats after the video release of “Revolution.”

“I want to show the world who the peshmerga forces are, and who Daesh is,” she said. Daesh is the Arabic equivalent for the Islamic State group.

The Kurdish singer filmed the music video near IS stronghold Mosul in Iraq, according to MailOnline. She is shown standing in front of a cannon and firing it at militants, and raising a “Stop the Violence” banner.

“We were in a little village called Khazer that was attacked by ISIS militants before and was abandoned. We were afraid to shoot [the video] as there were bombs left over and drove back at night because I thought it would be safer, but nothing was ever sure,” said Abdulla, according to International Business Times. 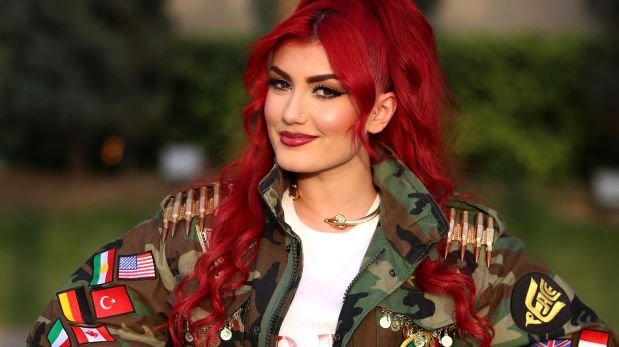 Born in Iran as the granddaughter of a peshmerga fighter, she grew up under the regime of Suddam Hussein, who brutally repressed the Kurds, before moving to Finland with her parents

Born in Eastern Urmia, Iran in 1988, to a family that originally came from Dohuk in Iraq, she grew up under the regime of Suddam Hussein in Iraq, who waged a brutal and deadly campaign of repression against the Kurds.

Her grandfather was a member of the peshmerga, the Kurdish fighting force, but her family decided to leave that life behind, moving to Finland  after seeking asylum while Helen was still young.

Having started life in the Middle East, she then spent her teenage years in the West, before moving to Los Angeles at the age of 18, keen to pursue a career in music. She  began making headlines with last year’s music video, “Risk It All.”

Living in the city on her own, she promoted herself through her Myspace page and struggled to get a break, but was eventually picked up by a record label just as she was planning to return home.

Her debut single made it all the way to number three in Finland, competing with Rihanna’s Diamonds for the top spot, and an album followed shortly afterwards.

But it is her latest track for which she has received the most attention, and won the attentions of Kurdish fighters in the Middle East.

Entitled Revolution, it was filmed in an abandoned town near Mosul in Iraq, just a mile from where ISIS fighters were clashing with Kurdish forces.

Last year she was threatened after filming a raunchy music video in the streets of the Iraqi Kurdish capital Erbil.

She made the latest video to highlight the struggle of the Kurdish peshmerga, who have been fighting ISIS for more than a year along the porous border that separates Iraq’s Kurdish region from the rest of Iraq.

Peshmerga officer Nawzad Saleh, said that in the days when the peshmerga were mountain-based rebel fighters, singers sang songs encouraging them to fight.

‘Now the Kurdish singers have begun singing for the Peshmerga in other languages, and this is a beautiful step and will result in the world knowing more about who the Peshmerga are,’ he said.

Why do we come to this world since our end is definite?