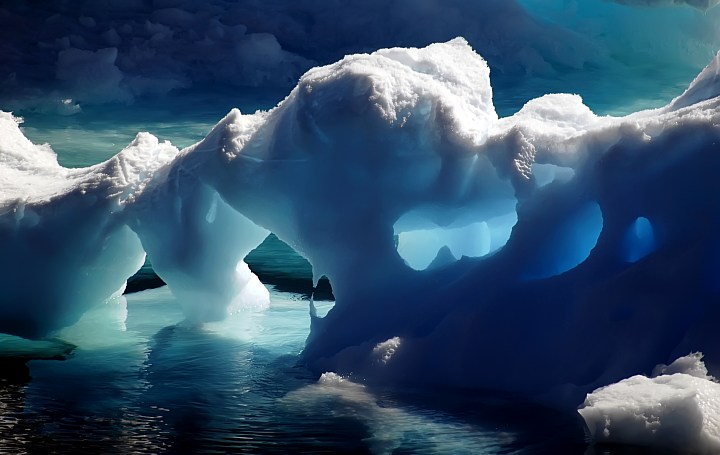 Formed by the hot water from a volcanic spring below Vatnajokull glacier.

With its location five kilometers northwest of the downtown of Guilin, the Reed Flute Cave is a brilliant cave marked on almost all travel itineraries. The cave got its name from the verdant reeds growing outside it, with which people make flutes. Inside this water-eroded cave is a spectacular world of various stalactites, stone pillars and rock formations created by carbonate deposition. Illuminated by colored lighting, the fantastic spectacle is found in many variations along this 240-meter-long cave. Walking through the serried stone pillars, tourists feast their eyes on changing spots, feeling they are in a paradise where the Gods live. 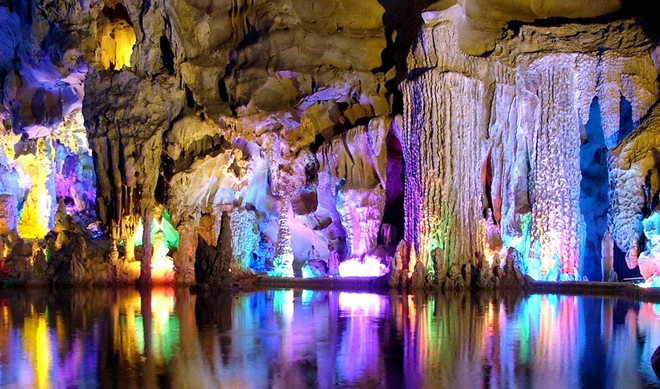 This cave is not only a longest but also the most beautiful cave of Iran given a cave phenomenones. Katale- Khor cave locates at Zanjan province and at 150km Zanjan city. Almost 3/000m from the route of this cave has been performed for building a floor and lighting and prepared for visiting the public. Despite three floors from this cave has been discovered and also from perspective of the longitude the much area of cave has been identified, but there are the undiscovered parts and routes in this cove yet. Kinds of stalagmite and stalactite as simple and composite, fungal-shaped, kinds of lime columns, colloform sediments, strip – shaped relief , lime masses as imaginary pictures, natural volumes similar to animals and other beautiful cave phenomenon s are an observable in this cave. The residence and catering possibilities around cave and it’s access road have a desired quality.

“Son Doong Cave, located deep in the Vietnamese jungle, is the world’s biggest cave and was only explored for the first time in 2009. It’s so big it has its own weather system and a Boeing 747 could fly through its largest cavern. This photo shows some members of our party in Phong Nha-Ke Bang National Park starting the climb up one of the two dolines (sinkholes), which are prominent features inside Son Doong Cave. The vegetation seen here fell inside the cave when the roof collapsed (the jungle floor is around 150 metres further above). Two-way radios and a laser pointer were used to get people in position for this photo and ensure their headlamps provided just the right amount of illumination.”
Photo: Chris Miller

The Onondaga cave belongs to the Missouri National Park. The cave boasts of towering stalagmites, dripping stalactites and other active flow stones. These caves are a natural phenomenon ranked side by side with the Grand Canyon, the Great Barrier Rift, Mount Everest, the Galapagos Islands and others. Caves have formed in 300 m thick layer of Cretaceous and Paleocene limestone. Explored length of these caves is 6,200 m (20,341 ft). The cave boasts almost 45 km of twisting and turning passages. It is lined with wondrous gypsum crystals creating a galaxy of beautiful sparkling stars.

On the third place, we have Sumaging-Latipan-Lomyang Crystal Cave in Sagada, Mt.Province. In terms of vertical range it is the deepest reaching 163 meters from its mouth. In terms of length, it is the fifth longest cave in the Philippines. Six entrances lead to a complex mix of active and fossil cave remarkable for its large passages and impressive gours. The system is partially accessible to tourists and a sump connected to Lokohong Cave. This famous sea cave is located off the coast of the island of Capri, Italy. It is notable for its gorgeous and brilliantly blue waters, a color created by sunlight shining through the seawater into the underwater passageway. During the times of the Romans, the cave was thought to be the home of witches and monsters, but that doesn’t deter visitors today — it remains one of the most popular attractions on the island of Capri. 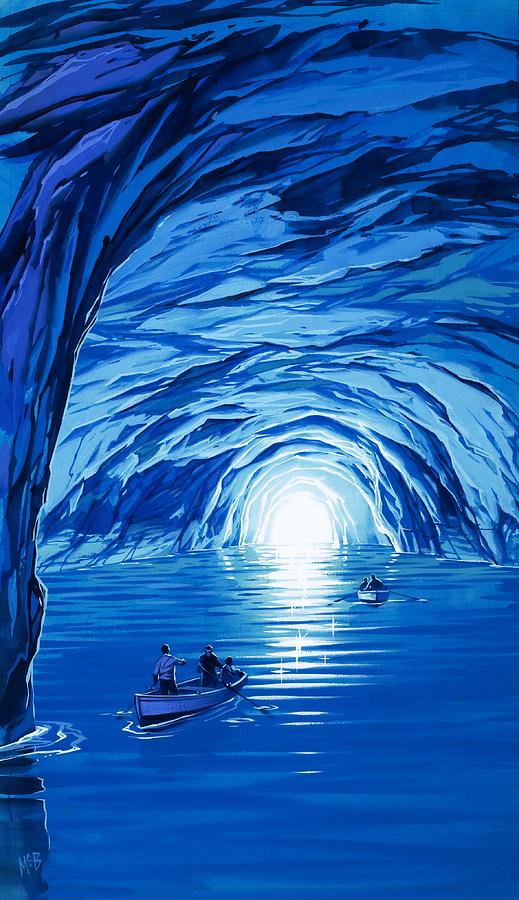 This cave is formed from hexagonally jointed basalt columns with in a Paleocene lava flow. It is known for it’s naturally arched roof, which produces eerie sound made by the echoes of the waves to give an atmosphere of a cathedral. These caves are a natural phenomenon ranked side by side with the Grand Canyon, the Great Barrier Rift, Mount Everest, the Galapagos Islands and others. Caves have formed in 300 m thick layer of Cretaceous and Paleocene limestone. Explored length of these caves is 6,200 m (20,341 ft).

These caves in Waitomo are known for it’s population of glowworms that are the size of an average mosquito. It is unique to New Zeland so if you travel there it is a must-see. Named after Thomas Harrison who owned the area in the early 1700s, Harrison Cave was rediscovered in 1974 by Ole Sorensen, an engineer and cave adventure enthusiast from Denmark and was later developed by the government of Barbados as a show cave and attraction. The caves, which were opened to the public in 1981, are formed naturally through water erosion via the limestone rock. The guided tour usually starts at “The Great Hall,” a huge cavern 100 ft in height; and is followed by a stop at ”The Village,” where formations have joined to form columns after thousands of years.

Kindness is the sunshine in which virtue grows

Cat walks on his front legs