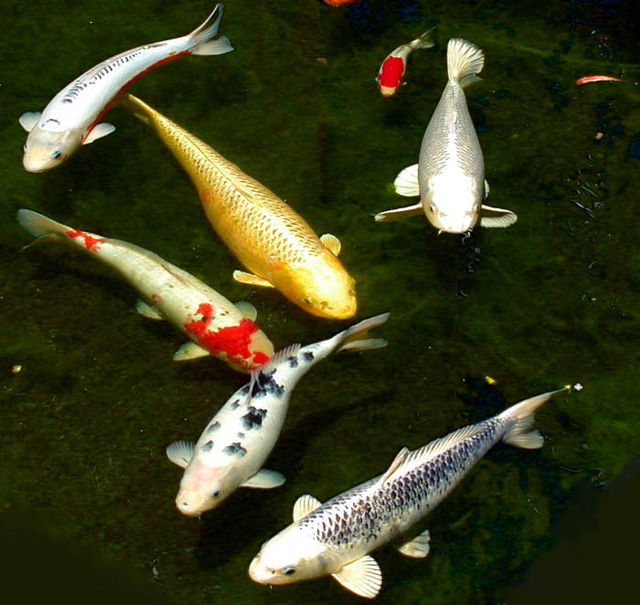 In Japanese Culture The Koi Fish Or Carp Is Thought To Be One Of The Most Vital Fishes. This Is Because It Is Always Going From One Place To The Next And Doesn’t Stop Swimming, Often Moving The Water.

Kohaku:
Kohaku is part of the Gosanke class and has a red pattern on a white back ground. It has been said that Koi keeping begins and ends with the Kohaku. Kohaku, Taisho Sanshoku and Showa Sanshoku are the most popular varieties and are sometimes referred to as the “Big 3″. 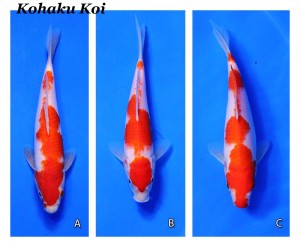 Showa Sanshoku is a Koi with calligraphic Sumi pattern on Kohaku. It is called Showa because the variety was created in the era of Showa in Japan. In short, it is called “Showa Sanshoku” or “Showa”. 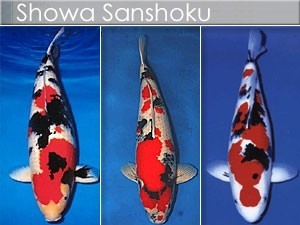 Bekko:
Shiro Bekko is Taisho Sanshoku (Sanke) with no Hi (red) pattern. Aka Bekko body is covered with Hi and Ki Bekko body is yellow. Good specimens are far and few between.

Asagi:
Asagi is one of the oldest varieties of Nishikigoi. Its back color  can be pale blue, indigo or navy blue with a net like appearance to the scales.  Red or a deep orange is the color for the fins and below the lateral line. Although not always favorable Hi Asagi (red has risen onto the back) can have a striking appearance. 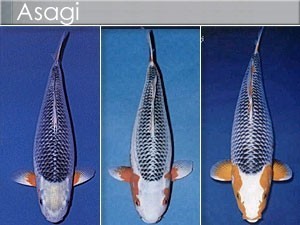 Shusui:
Shusui are the doitsu version of Asagi. They have dark blue scales running from the shoulder to the tail section. Just like its ancestor the Shusui may have different variables, like Hana or Hi Shusui.

Koromo:
The Koromo category consists of Ai Goromo and Budo Goromo. Koromo translates to “clothed” or “robed”. On a white base the Ai Goromo has blue scale reticulation within the red scales. On the Budo Goromo the two colors red and blue have blended to give a purple color and can look like patches of grapes. There is also Sumi Goromo.

Goshiki:
Goshiki come in a dark (old style) or light (new style) grayish background and a Kohaku Style Beni (red) pattern. This gives a three dimensional look. Asagi scale influence may be set within the Beni. Goshiki means “five colors” with the white, red and black of Sanke then of the navy and blue of Asagi.

Hikari Muji:
Hikari Muji consists of Nishikigoi with a solid color (no pattern) metallic sheen. Yamabuki and Platinum Ogon seem to be the most popular. Kin and Gin Matsuba are also in this category.

Hikari Moyo:
In this category are metallic koi that do not fit into Hikari Utsuri or Hikari Muji such as Kujaku (“Peacock”) Kikusui and Yamato Nishiki (metallic Sanke).

Kumonryu / Kikokuryu:
Kumonryu is a doitsu koi with unstable Sumi (black) that will disappear and reappear with changes in water temperature this is the same for the Beni Kumonryu. Kikokuryu and Kin or Beni Kikokuryu are the metallic versions of the Kumonryu.

Kawarigoi:
This category has many recognized varieties that do not fit into the other categories. Chagoi, Benigoi, Kigoi and Ochiba seem to be popular Kawarigoi.

Tancho:
Tancho Kohaku, Sanke and Showa have only a red dot or “crest” on their heads. The Tancho Kohaku is adored by the Japanese citizens as it is reminiscent of the Japanese flag that has a white background with a red sun.

TRAVEL: Exclusive,Rare, and Fastest Supercars
20 Insane Wardrobe of Stars
Why the French are so strict about Islamic head co...
MUSIC: You Changed My Life In A Moment

Hair Styles for Long Hair and for Long Thick Hair

Photos: To Have Faith Is To Have Wings : Amazing Flying Birds Photos