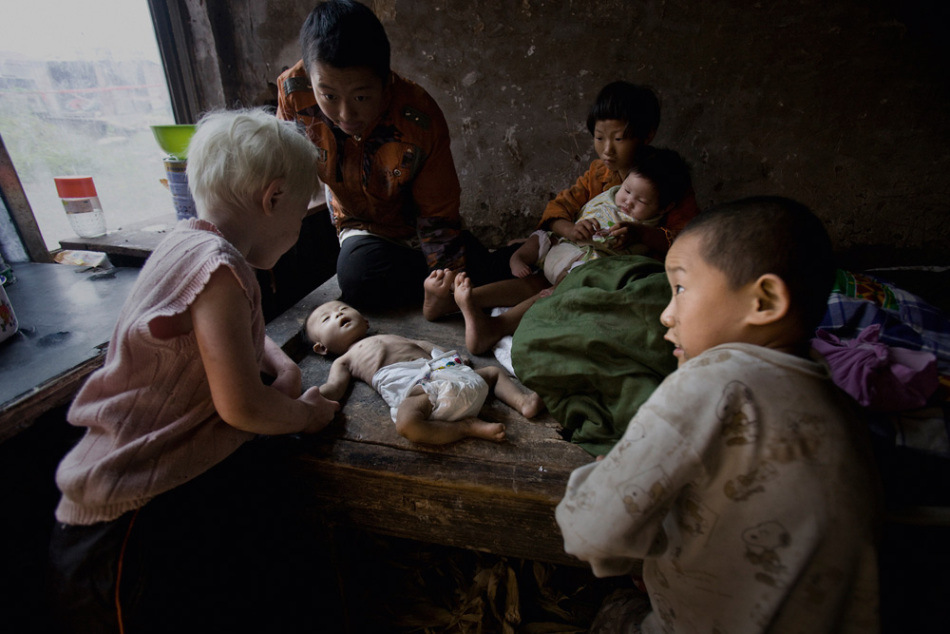 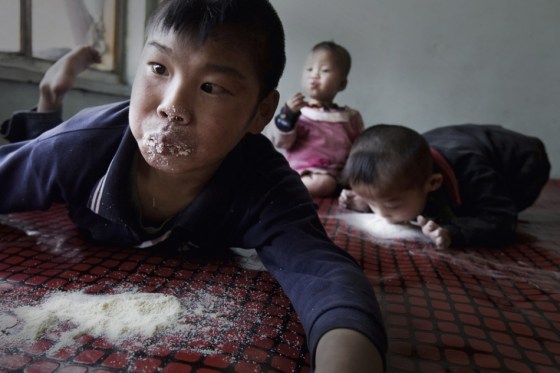 Since 1986, Henan Lankao County’s Yuan Lihai has already adopted over 100 foundlings [abandoned babies]. Those who have grown up to marry and work have left, and there are still 39 with her today, some suffering from albinism, some with cleft palates. Yuan Lihai peddles goods on the street to make a living for herself and these abandoned babies, while her husband who opposed her taking in abandoned babies has separated from her. Photography: Lu Guang from the August issue ofLens magazine. [click to enlarge] Five foundlings lie on a bed made of a straw mattress and dirty bedding, some playing, some dozing. The honeycomb briquettes at the head of the bed are stacked very high and could easily fall onto the bed if not careful. This is a residence of Henan Lankao County’s Yuan Lihai. Beginning in 1987, Yuan Lihai has taken in handicapped or diseased children, having adopted over 100 over the past 25 years, with some of the children having died due to severe illness and inadequate medical treatment. Yuan Lihai is rather well-known locally, with the ordinary common people, hospital, and even 110 [police, emergency services] all sending children they have found to her. At a certain level, the inadequacy of public welfare institutions [orphanages] has pushed these kinds of “private orphanages” towards complications between morality, law, and interest/profit. Yuan Lihai does not have a permanent residence in Lankao County, normally living in a tent where she peddles goods on the street. She has a total of four places where the children live, with dozens of children living in two small homes. No far in the back are Lankao’s high-end villas. Compared to feeding, the problem of clothing the children is slightly easier to overcome. In the past, it was always the neighbors or the people’s government who would provide a little and scavenging some off the streets. Those that the larer children have outgrown, the smaller children can continue wearing. When the clothes have holes, Yuan Lihai would patch them up. After gradually becoming known, many kind-hearted people have donated their old clothes and shoes for the children to wear, resulting in a heap that has become a small mountain. 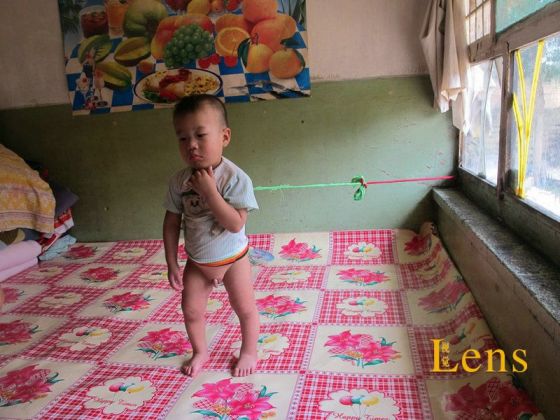 In certain places of Yuanping in Shanxin province, adoption/foster care has already become a business. However, foster families often cannot provide foundlings very good care. In order to lessen the hassles of watching [the child], this household has used a rope to tie this foster boy to the heatable brick bed, restricting his movement. (This photo’s photographer: Yang Meng) Shanxi Jiexiu County’s Mao Naifeng gave birth to a set of fraternal twins, the children’s arrival having brought great joy to the entire family. However, 14 months later they discovered that of the two children, one has encephalatrophy and the other has hydrocephalus, resulting in lower-body paralysis, unable to walk. However, Mao Naifeng and her husband did not give up, the wife persisting in massaging and moving the child’s four limbs in hopes of rehabilitation. At present, the incidence of birth defects in China is 13-15%, with the majority occurring in the rural countryside, not without relation to the lack of pregnancy exams, environmental pollution, and other reasons. However, in certain developed countries of Europe and America, the incidence of deformity is basically kept at 3-4%. Due to the amount and limits of public welfare coverage, many families are often pushed to poverty by handicap and disability, and often forced into the ethical dilemma of abandoning such babies. 2010 September 23 night, this mentally handicapped child who had been fostered for six months died from illness. Because he had not reached one year, he doesn’t have a name. This was the 21st infant Yuan Lihai found last year, as well as the tenth baby to die from sickness. Children who spend every day with each other surround their just passed away little brother, reluctant to leave his side. 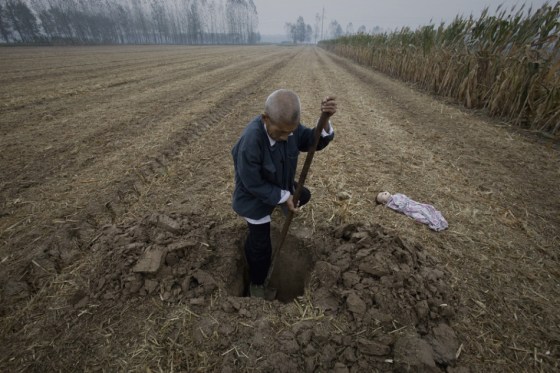 2010 September 23 day, this foundling without a name has been taken to a distant place to be buried, the child’s eyes still slightly open, as if with a sliver of attachment to this world it never knew.

To People In Love
Better Photography with Your Phone’s Camera
FOODS: 10 Insanely Delicious Cheesecakes You Won’t...
Marc Mero’s Powerful message About A Mother&...

To People In Love
Better Photography with Your Phone’s Camera
FOODS: 10 Insanely Delicious Cheesecakes You Won’t...
Marc Mero’s Powerful message About A Mother&...