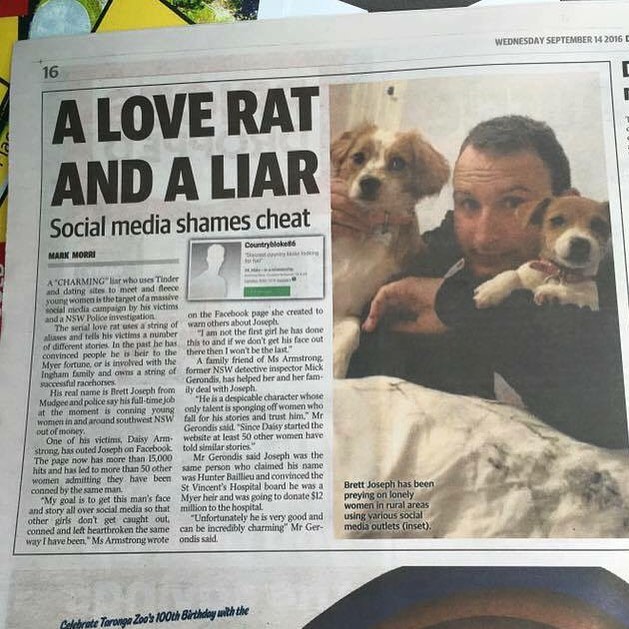 A “CHARMING’’ liar who uses Tinder and dating sites to meet and fleece young women is the target of a massive social media campaign by his victims and a NSW Police investigation.

A family friend of Ms Armstrong, former NSW detective inspector Mick Gerondis, has helped her and her family deal with Joseph. “He is a despicable character whose only talent is sponging off women who fall for his stories and trust him,” Mr Gerondis said. “Since Daisy started the website at least 50 other women have told similar stories.’’

The serial love rat uses a string of aliases and tells his victims a number of different stories. In the past he has convinced people he is heir to the Myer fortune, or is involved with the Ingham family and owns a string of successful racehorses.

Mr Gerondis said Joseph was the same person who claimed his name was Hunter Baillieu and convinced the St Vincent’s Hospital board he was a Myer heir and was going to donate $12 million to the hospital. “Unfortunately he is very good and can be incredibly charming’’ Mr Gerondis said.

His real name is Brett Joseph from Mudgee and police say his full-time job at the moment is conning young women in and around southwest NSW out of money.

More than 50 women have now come forward to claim they’ve been a victim. Source: Facebook

One of his victims, Daisy Armstrong, has outed Joseph on Facebook  (https://www.facebook.com/stopconmanandfraudbrettjoseph/)  The page now has more than 15,000 hits and has led to more than 50 other women admitting they have been conned by the same man.

Police say Brett Joseph’s full-time job at the moment is conning young women in and around southwest NSW out of money / Facebook (www.dailytelegraph.com.au)

A Riverina woman has warned people about a “Tinder con man” who has left a trail of emotional and financial damage in his wake.

Daisy Armstrong’s simple “swipe right” led to a six-month relationship with Brett Joseph, a man who once tried to swindle a hospital out of millions of dollars.

“My goal is to get this man’s face and story all over social media so that other girls don’t get caught out, conned and left heartbroken the same way I have been,” Ms Armstrong wrote on a Facebook page created to warn potential victims about Joseph.

“I am not the first girl he has done this to and if we don’t get his face out there then I won’t be the last.”

Ms Armstrong could have become yet another statistic, but for a connection to an experienced fraud squad detective. Her sister had gone to school with the daughter of retired Detective Inspector Michael Gerondis, who headed the 2009 investigation into a woman who stole more than $40 million from ING.

“I’ve done fraud investigations for years; there are red flags and this guy’s got all of them.” Mr Gerondis said.

“We did some digging and once we found the A Current Affair story, it was all done.”

In 2012, a man calling himself Hunter Baillieu, who claimed to be an heir to the Myer fortune, offered St Vincent’s Health $12 million to build a virology centre.

He was invited to a function attended by then-Prime Minister Julia Gillard and singer Delta Goodrem and his pledge led to a US-based biomedical research fund offering to match his seed funding.

When St Vincent’s ran a background check, they discovered Baillieu was really Brett Joseph, a con artist from Mudgee.

Mr Gerondis said the Armstrong family, which owned Corynnia Station at Carrathool, was still trying to work out how much they had lost.

“Once you’ve got a bloke like that in your life, anything (Ms Armstrong) had access to he did as well.”

Joseph has left a trail of victims from Mudgee to Griffith, where he met Ms Armstrong.

“They get your confidence by romantic means or through business, but the results are always the same.

“They think they’re smarter than everyone else and they’re happy to manipulate people, driven by ego to seek out money and success, they can’t help themselves.”

Griffith police confirmed they are investigating the matter.

We have to proclaim that every human being is equal, in dignity, in freedom, we have to live “in a spirit of brotherhood.”

FOODS: 10 Insanely Delicious Cheesecakes You Won’t...
Circassian People: The Circassians are one of the ...
HEALTH: HOW TO MAKE YOUR BABY SMARTER EVEN BEFORE ...
TRAVEL: THE 10 MOST EXPENSIVE CARS IN THE WORLD (2...

FOODS: 10 Insanely Delicious Cheesecakes You Won’t...
Circassian People: The Circassians are one of the ...
HEALTH: HOW TO MAKE YOUR BABY SMARTER EVEN BEFORE ...
TRAVEL: THE 10 MOST EXPENSIVE CARS IN THE WORLD (2...