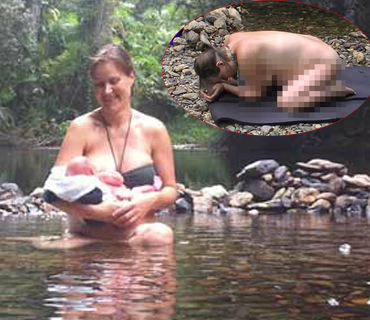 WARNING: Nudity.
A MOTHER-OF-FOUR who shared a video of herself giving birth in a stream and completely unaided has insisted she isn’t a “hippy drippy mum”, but wanted to show others how magical the experience is.
Simone Thurber, 43, posted the footage of her youngest daughter Perouze, now four, being born on YouTube, where it’s been viewed a whopping 52 million times.
Simone didn’t have any pain relief or a midwife or doctor with her.
“I didn’t put the video online to make a statement I simply thought a few people would be interested in what it would be like to give birth in nature and to inspire women that if they wanted to they could have a child outside a hospital,” she explained.

“I never expected the massive interest.

“My first three girls were home births but I have always wanted to have a baby in nature.

“I am not a hippy drippy mum but I wanted my fourth child to be born away from beeping machines and a hospital environment.

“Let’s face it, women have been giving birth in the wild for thousands of years but the thought of a modern women squatting in a creek and giving birth horrified many people even before I gave birth and shared the video.”

Simone is a trained doula — a person who supports women during labour.

She lives in Park City, Utah, and it was her upbringing which made her want to experience birth outdoors.

Her mat was like one you use in yoga. Picture: Real Life Story Agency

“My parents had been missionaries in Papua New Guinea,” she said.

“I remember mum often telling us when a local lady had her baby and how at the time when she was due to give birth she simply found a nice spot pushed out the baby breastfed it and wrapped it in a carrier cloth, tied the child to her back and went about her business.

“That stuck with me and is one of the reasons I wanted to give birth to Perouze in the wild.

When she realised she was pregnant with her fourth baby, Simone told her then partner Nick of her dream.

Simone with Perouze in the creek where she was born. Picture: Real Life Story Agency

He was supportive so she started researching where she could give birth.

Initially she hoped to find a spot near a rock pool and the sea to welcome her baby, but she was living in Melbourne at the time and the weather was too unpredictable. She was also worried the beach would be too public.

“A call out to friends saw a pal in the Daintree Forest in Queensland offer his house which was 56 minutes from the natural forest,” she recalled.

“I figured I’d give it a go — he had an amazing house and worst case scenario she’d be born in a birthing pool.”

Two weeks before her due date, Simone and her family headed to the house and started scouting out locations.

They couldn’t use the beach because there was a jellyfish infestation, so the group started looking in a rainforest.

Eventually they found a creek, with Simone’s daughters — now aged 18, 16 and six — all saying it’s just where they would have chosen to be born if they could.

“I went down there during the day and then at night,” she said.

“At night it was extremely dark and so we decided that if the birth was going to occur in the middle of the night I’d have the baby in an old tin bath outside our friend’s house.”

Simone went into labour at 11pm and thought it would be quick because her others had been.

That meant the creek wasn’t going to happen but by 9am the following day she was still having contractions.

The family got in their car and went to the creek, and after two hours Perouze entered the world as Simone squatted in the stream.

“I had brought a thin foam mat with me like the type used for yoga and when the baby’s head came out I naturally flicked onto my back but she was slightly stuck,” Simone said.

“Nick was filming and he gave the camera to our friend and gave her head and shoulders a nudge and she came out.

“I immediately grabbed her and put her on my chest.

“The sun was shining, we were in a creek and we had a new baby.

“It took another two hours to birth the placenta and when we got back to their friends house I ripped a piece off and I had a placenta smoothie.

“I suffered post-natal depression with all my births and this helped, I felt energised and awake.

“The whole experiencing felt empowering and freeing and our beautiful little girl was healthy and fine.”

She was 39 during her pregnancy and it was hard, but the mum is proud that she followed her gut when it came to the birth.

“There was no doctor there and if something had gone wrong it would have been very difficult to get to hospital,” she said.

“However as a doula I knew the baby’s head was engaged and my body was telling me I had made the correct decision.

Perouze with one of her sisters. Picture: Real Life Story Agency

She wanted to show other women anything is possible, but didn’t expect it to take off.

“Naturally I would not suggest you try this without talking to doctors and your doula or midwife but as a mum of three children already I felt it was the right decision,” she said.

“After 50 people watched it I thought OMG my friends have seen me really naked, after 500 I was shocked and now 52 million people have viewed it,” she said.

“I think wow and get many complimentary emails and provide advice to people.

“If people watch it and learn just a little something about the birth process or it makes them have a greater understanding of what happens or it builds their confidence to perhaps ask their GP or midwife more questions than I have done my job.

“So many women especially first time mums have thanked me saying I have inspired them to not be as terrified.”

Sadly Nick passed away from cancer, and Simone has since remarried.
All her daughters have seen the video and it’s even inspired a US TV show — although she’s had no involvement with it.

Simone doesn’t suggest other women give birth in the wild, instead she’d recommend using a midwife of doula.

She has set up a Facebook page called Birthing in Nature for anyone interested in the experience though.

God promise strength for the day, comfort for the...
Health:3 Secrets to Shielding Your Brain from Memo...
GORGEOUS WILDLIFE SHOOTS
BEAUTY AND FASHION: Then and Now African Hairstyle...

God promise strength for the day, comfort for the...
Health:3 Secrets to Shielding Your Brain from Memo...
GORGEOUS WILDLIFE SHOOTS
BEAUTY AND FASHION: Then and Now African Hairstyle...