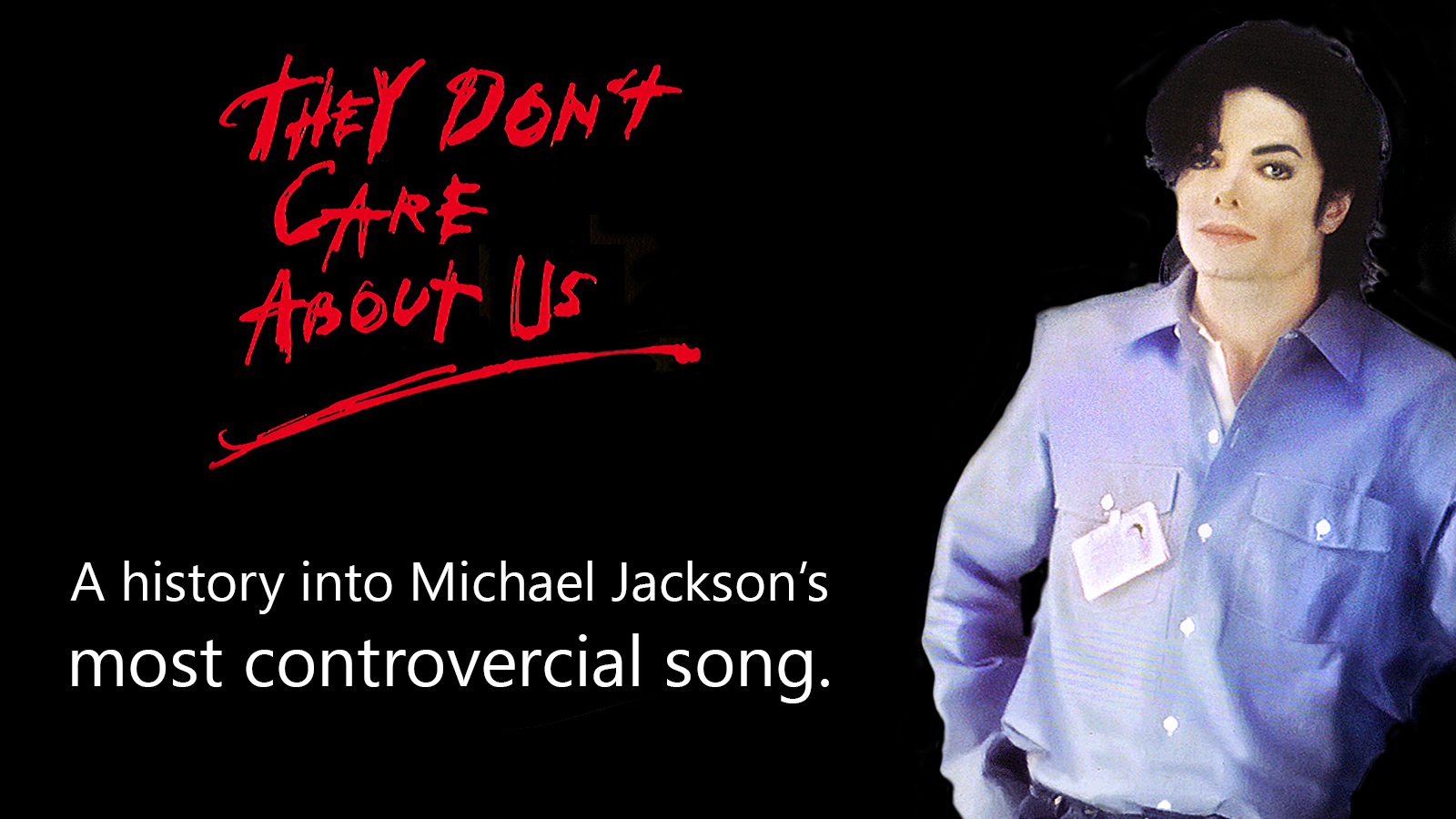 Here’s the music video for an interesting Michael Jackson song called “They Don’t Care About Us,” on racism, oppression, and the injustices of the modern world’s system of justice.

Michael Jackson – They Don’t Care About Us

Tell me what has become of my life
I have a wife and two children who love me
I am the victim of police brutality, now
I’m tired of bein’ the victim of hate
You’re rapin’ me of my pride
Oh, for God’s sake
I look to heaven to fulfill its prophecy
Set me free

Skin head, dead head
Everybody gone bad
trepidation, speculation
Everybody allegation
In the suite, on the news
Everybody dog food
black man, black mail
Throw your brother in jail

Tell me what has become of my rights
Am I invisible because you ignore me?
Your proclamation promised me free liberty, now
I’m tired of bein’ the victim of shame
They’re throwing me in a class with a bad name
I can’t believe this is the land from which I came
You know I do really hate to say it
The government don’t want to see
But if Roosevelt was livin’
He wouldn’t let this be, no, no

Skin head, dead head
Everybody gone bad
Situation, segregation
Everybody allegation
In the suite, on the news
Everybody dog food
Kick me, strike me
Don’t you wrong or right me 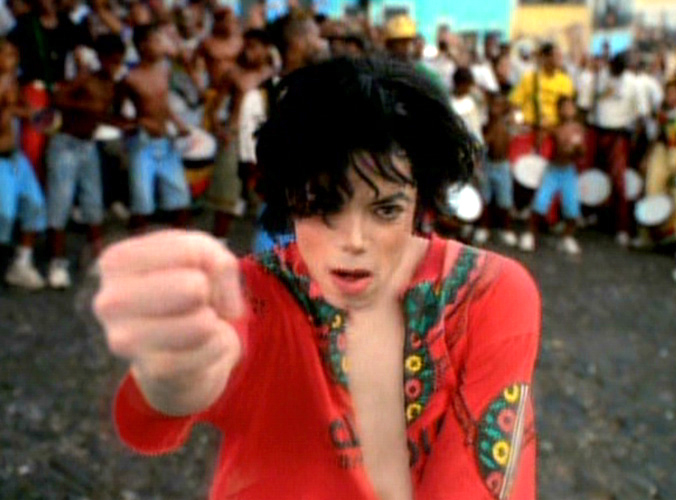 This article from Dangerous Zone fanzine, 2001, tells the story behind Michael Jackson song “They Don’t Care About Us,” and the music videos for it. It also offers an analysis of the meaning of the song and the videos, and their importance in Michael’s career.

And yet another scandal. “They Don’t Care About Us” even managed to break the controversy record previously set by “Black or White” – because this time there were two scandals at the same time. First, the US Jewish community was disturbed by the lyrics because it allegedly contained anti-Semitic words (the lyrics to this song is being discussed to this day). Then the Brazilian government did exactly what the good old Communist governors in the USSR used to do – “we maintain that everything is fine in our state, and whoever doesn’t think so will be silenced.” And even Pele, a nice man, a great football player and a national hero, supported this point of view. Perhaps, the most irritating thing for everybody was that Michael Jackson, who had been indifferent to politics up to that point, suddenly released a song that manifested his views very directly: “You know I really do hate to say it, the government don’t wanna see…”

While we are waiting to see what Michael Jackson will tell the world in his upcomingInvincible album, let’s recall one of his boldest works that suddenly displayed a clear and simple public stance of the “most apolitical” performer on the planet.

June, 1995: Soon after the release of the HIStory album, a scandal flares up about words “jew me” and “kike me” used in “They Don’t Care About Us.” Michael is forced to apologize for using these words. According to CNN, the controversial fragments of the lyrics will be rewritten to sound like “do me” and “strike me.” Later these words are masked by sound effects, and History is reissued with a new version of “They Don’t Care About Us.” The original version of the album is a collector’s item today.

February, 1996: Scenes for one of the two “They Don’t Care About Us” short films (known as “the prison version”) have already been filmed in a real prison in Queens, New York. Michael Jackson is planning to go to Brazil to shoot the second version of the short film. Meanwhile, the Brazilian authorities intend to prohibit the filming – some of the government members expressed their dislike towards the project as, in their opinion, it would show Brazil in an unfavorable light; yet others approved of the idea hoping that a Michael Jackson video would draw the world’s attention to the Brazilian poverty, and the region might even get some help. Brazilian officials are mostly concerned that the video will show impoverished districts of the city – Brazil is hoping to win the right to host the Olympic Games, and a demonstration of the Rio slums may affect their chances of hosting the Olympics in 2004. Residents of Rio de Janeiro favela are, nevertheless, very happy that the world will finally get to see their living conditions.

February 6: A day after the Brazilian judge gave permission to film the video for 20 days, he suddenly changes his mind and reduces the filming period to 5 days only.

February 11: Michael arrives in Rio. A day earlier, Spike Lee already started shooting in the central district of Bahia. The favela is shot in Rio; Michael’s dance with the Olodum band (a worldwide known Brazilian drum band consisting of approximately 200 members) and the scene where a young woman breaks through the cordon to hug Michael are shot in the historical part of another Brazilian city, Salvador. The territory where the filming takes place is protected by 1500 policemen. Michael dances for six hours straight (just two months after he collapsed during a rehearsal in New York on December 6, 1995). In the beginning of the video, a girl speaks in Portuguese, “Eles nao ligam pra gente,” which means “they don’t care about us.”

March 23: Global (except for the USA) premiere of the Brazilian version of “They Don’t Care About Us” short film. On MTV Europe, the video is broadcasted at 1 pm in program “First Look.”

April 16: “They Don’t Care About Us” debuts at No. 5 in the European chart. It also debuts at No. 9 in Sweden and at No. 4 in England (the fourth single off the Historyalbum to make a debut in the Top 5 in Great Britain).

April 22: “They Don’t Care About Us” short film is banned from broadcasting on MTV USA and VH-1. It was shown by MTV USA only once, with a notice of withdrawal from further rotation. The decision is caused not by the footage, but by the lyrics of the song.

June, 1996: “They Don’t Care About Us” short film is staying at No. 1 in the Top 20 on European MTV for several weeks. French musical channel MCM plays both versions of the short film without restrictions. (MCM also plays “Scream” short film without sound or video cuts, unlike MTV.) The prison version is prohibited on several music channels due to scenes of violence contained in the short film.

The fall of 1996: One of Brazilian football teams uses “They Don’t Care About Us” as its anthem and performs a ritual dance, copying Michael’s movements from the video, before each game to scare and demoralize the opponents.

September, 1997: MTV Europe starts showing the prison version of “They Don’t Care About Us” short film, but only after midnight.

Both versions of “They Don’t Care About Us” short film were directed by the same director, Spike Lee. The atmosphere of both videos clearly bears the influence of the two extraordinary people and great talents – Jackson and Lee; you can feel the pivot of energy created by this powerful duet. Spike Lee is a famous movie director. His movies “Jungle Fever,” “Get on the Bus” (Michael lent song “On The Line” for this one) depict problems of racial and social relationships – for instance, they tells what happens when a black man falls in love with a white woman and how their milieu reacts to this. These are powerful and sincere movies, and Spike Lee is an outstanding director whose achievements in films have been acknowledged and appreciated. So it is really interesting to hear his impressions from working with Michael Jackson.

“I’ve met Michael a couple of times. He got an award in New York City a couple of years ago from the United Negro College Fund as the Performer of the Year. Michael came to my house in Brooklyn, we sat and talked for four hours about the arts, movies we like, musicians – just the stuff we admired… And I mentioned to Michael that, on his History CD, there was a song I would really love to do a music video for, this great ballad Stranger in Moscow. And Michael said, ‘You do music videos?’ ‘Yeah, Michael, I do lots of music videos.’ So I gave him the reel with the stuff I’d done, and he said, ‘Great!’ Then the next time he called me back he said, ‘I want you to do Stranger in Moscow, but let’s do They Don’t Care About Us first.’”

“The original concept was not meant to be two videos, the prison stuff was going to be combined with the stuff we shot in Brazil. The marching orders Michael gave to me were that he wanted it to be hard-driven, he wanted the spark, an edge to it. He wanted to see a lot of archival footage in it that would chronicle man’s inhumanity to his fellow bothers and sisters. And using that as a starting point, we came up with this idea of Michael being one of many convicts in this prison.”

(On the video set) “Mike said he was gonna try to drive the crowd into a frenzy, and he did. And these two ladies jumped out from the crowd – security was lacking on one side, so these ladies jumped out, grabbed him, he fell to the ground! (laughing) I picked him up… and I asked the cameraman later, ‘Did you shoot it?’ and he said, ‘Yeah, and I’ve got you too.’ That was very funny. We did not plan this, that was not rehearsed, they just broke through, and it was exciting….
…Michael has a plane waiting, he has to be in New York with his crew tomorrow, so we’re gonna try to get as many shots as we can before Mike has to jet.”

“Here in this Brazilian video, you can see the love Brazilian people have for Michael. It’s out there. Shooting ‘They Don’t Care About Us’ with Michael Jackson in Brazil was one of the highlights of my career, and I’m including the feature films. I just had a great, great, great time. I think it was historical what we did. It was awesome.”

Health:3 Secrets to Shielding Your Brain from Memo...
Blouse of 12,000 bees on the naked body of a woman
Photos of Nature: 40 Amazing Trees on Earth
TRAVEL: THE 10 MOST EXPENSIVE CARS IN THE WORLD (2...

The Prophetess Miriam, Sister of Moses

How to Ignore Things To Have a Great Paths To Inner Peace?