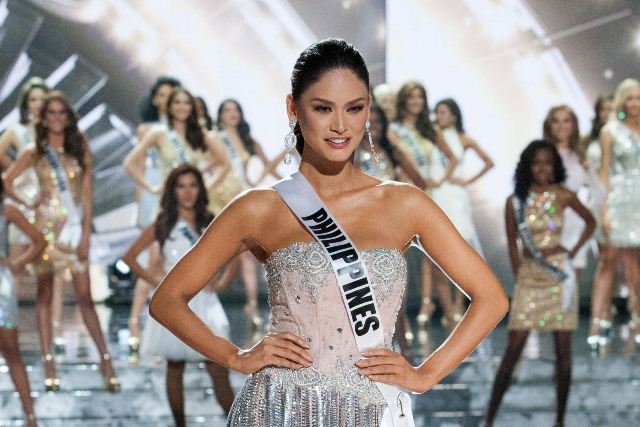 Beauty pageants are places where grace and poise are meant to rule. It is a celebration  of beauty. Beauty pageant is a competition that has traditionally focused on judging and ranking the physical attributes of the contestants, although some contests have evolved to also incorporate personality, intelligence, talent, and answers to judges’ questions as judged criteria. Seven of the final 15 contestants pose on stage at the Miss Universe pageant on Sunday, in Las Vegas. (AP Photo)

Miss Philippines Pia Alonzo Wurtzbach is the crowned winner of Miss Universe 2015 — the great news was announced at the end of Miss Universe Finale at The AXIS in Las Vegas, Nevada, USA on Sunday, December 20, 2015. In the defining moment of the Miss Universe 2015 beauty pageant, the judges gave the Final 5 with simple and yet taught questions during the Question and Answer (Q&A) Portion.

Below are the questions asked by the judges and the answers replied by the contestants.

Philippines: Do you think the US should have a military base in your country?

France: Having experience terrorism, what is the best way to combat this threat.

Answer: We have to know where the problems are coming from and listen to the people committing these attacks.

Answer: In certain circumstance, marijuana is beneficial like treating cancer. In that circumstance, yes we should. But the gov’t should weigh first option.

Colombia: Drug abuse continues to be one of the world’s biggest problems. What is the best way to handle this issue?

Answer: Our homes need to incentives education for these problems because they continue to be large problem for the world.

Answer: Incredibly difficult issue. It’s important that all individuals have the right to protect themselves and feel safe. Sometimes, we need to look at the safety of the whole rather than personal safety. We need better regulations so we need to pay attention.

Question: Why should you be the next Miss Universe?

USA: I should be the next universe because I’m so passionate and so driven. I want to work to bring equality towards men and women and its time to stepped to empower women all over the world.

Colombia: I’m positive that I should be the 3rd Miss Universe from my country because I have attributes of a Latin woman, a woman from Colombia should have, and a Miss Universe.

Philippines: To be a Miss Universe is both an honor and a responsibility. I will use my voice to raise awareness and shed light in causes like HIV. Show the world that I am confidently beautiful with a heart. 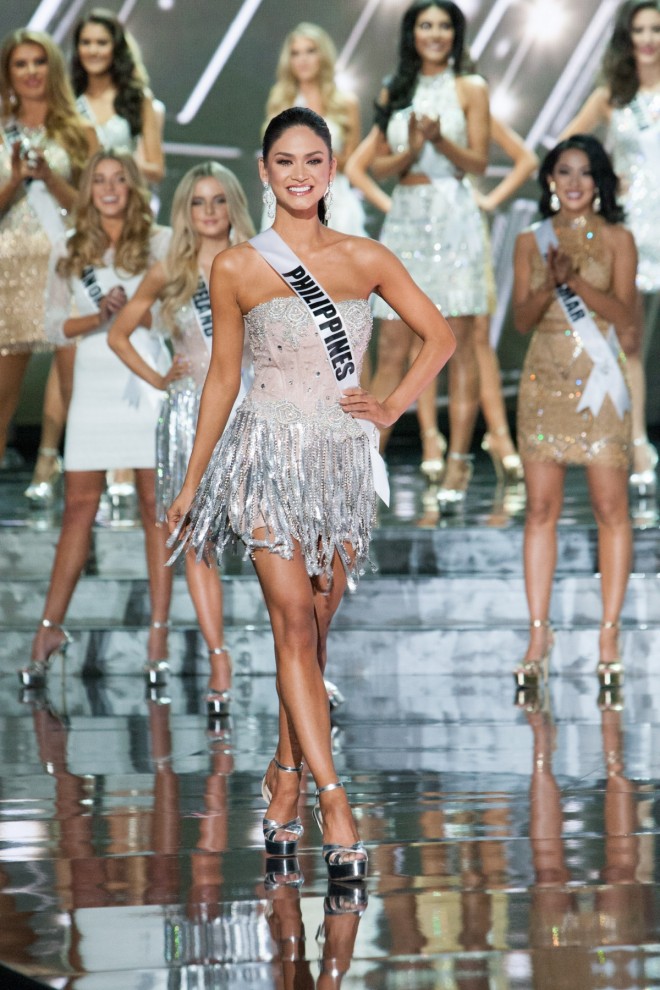 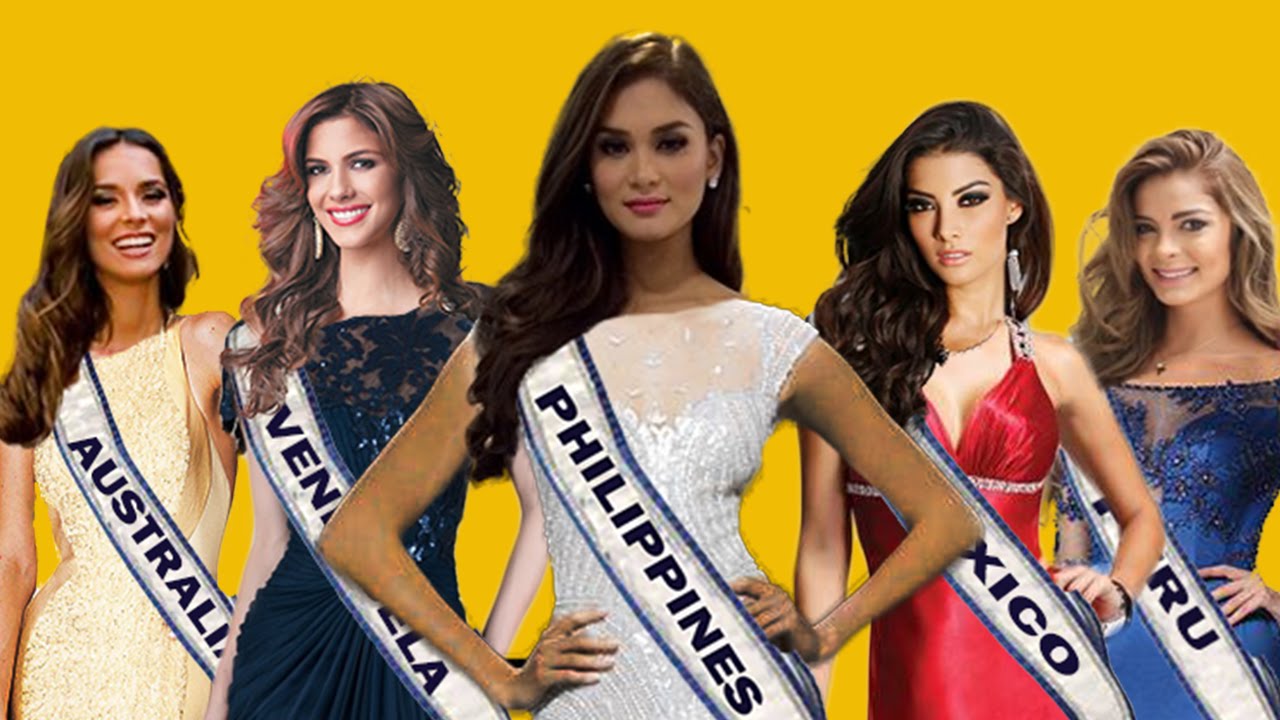 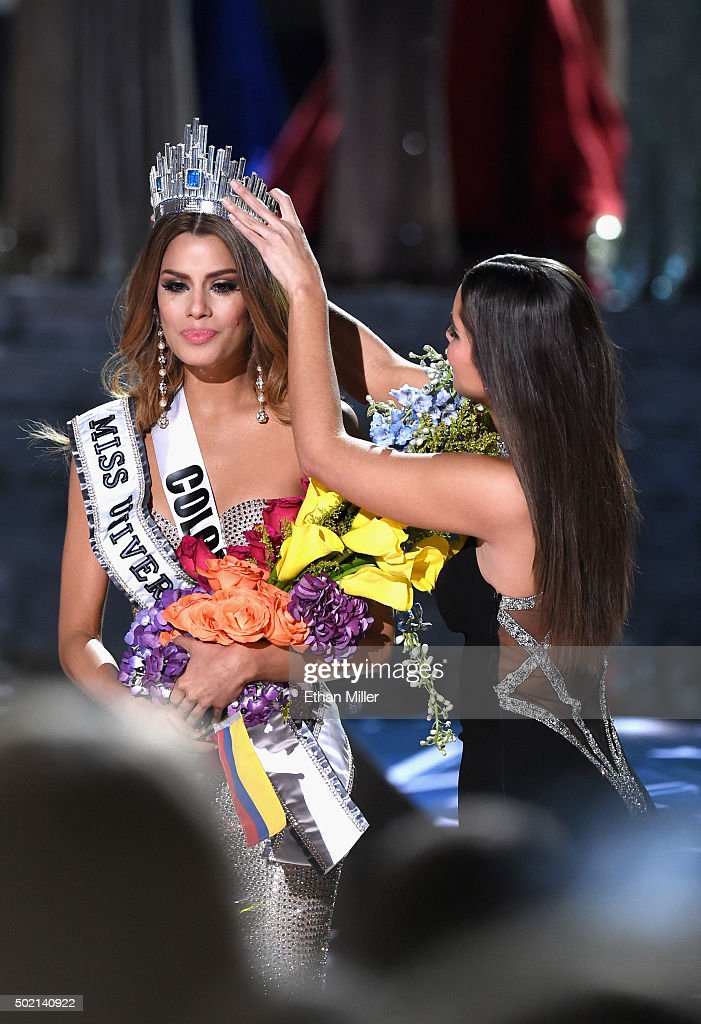 For around 90 seconds, Miss Columbia Ariadna Gutierrez was crowned the winner and had been given her flowers. She was basking in her moment of glory on stage.

IN one of the most unexpected endings to a Miss Universe final, Miss Colombia was mistakenly crowned as the winner. The host, Steve Harvey, had accidentally read out the wrong name. Steve Harvey Crowns The Wrong Miss Universe 2015. The embarrassed host even showed the results card to the camera to prove that it had truly been his own personal mistake Wurtzach was wide-eyed and frozen after Harvey first revealed his slip-up and she realized exactly what that meant for her (dailymail.co.uk) So was Harvey’s Miss Universe gaffe funny or stupid? For his part, Harvey has apologized for his embarrassing gaffe, calling it a “horrible mistake” on TV and taking to Twitter to apologize. Unfortunately, he spelled Colombia and the Philippines wrong in the since-deleted tweet. He then tweeted the apology again with the correct spelling. “I’d like to apologize wholeheartedly to Miss Colombia & Miss Philippines for my huge mistake. I feel terrible,” he wrote. “I don’t want to take away from this amazing night and pageant. As well as the wonderful contestants. They were all amazing.” (hollywood.com) Wurtzbach joined Gutierrez on stage in shock in the moments after Harvey revealed the wrong name had been announced (dailymail.com) Beauty pageants are places where grace and poise are meant to rule, but a decidedly awkward moment stole the show Sunday.

Miss Universe 2015 host Steve Harvey wrongfully declared Miss Colombia the winner when she was the first runner-up. Pia Alonzo Wurtzbach, the contestant from the Philippines, had actually won.

A contrite and embarrassed Harvey was forced to fix his mistake.

“Listen, folks, let me just take control of this. This is exactly what’s on the card. I will take responsibility for this. It was my mistake. It was on the card,” he told a confused crowd in Las Vegas.

The Miss Universe Organization added their own apology saying, “The excitement of live TV was evident tonight on The Miss Universe stage with over 10 million live fan votes tabulated. Unfortunately, a live telecast means that human error can come into play. We witnessed that tonight when the wrong winner was initially announced.” Even Donald Trump has weighed in on the controversy. Trump, the former owner of the pageant, tweeted, “Very sad what happened last night at the Miss Universe Pageant. I sold it 6 months ago for a record price. This would never have happened!” (hollywood.com)

I’d like to apologize wholeheartedly to Miss Colombia & Miss Philippines for my huge mistake. I feel terrible.

Secondly, I’d like to apologize to the viewers at that I disappointed as well. Again it was an honest mistake. 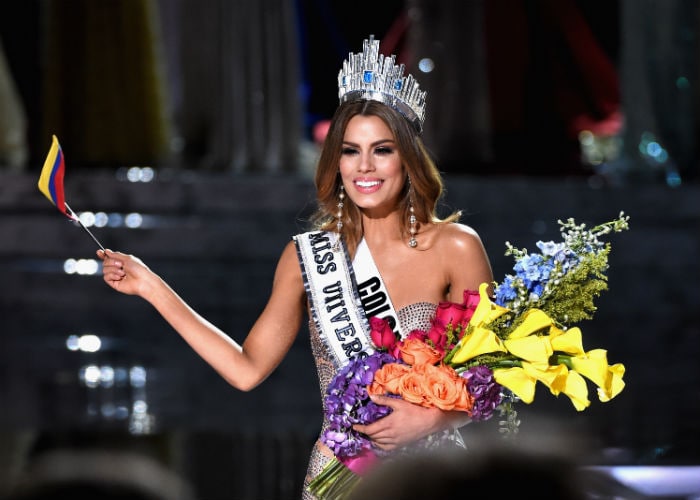 Moments before, he’d announced Miss Colombia Ariadna Gutierrez as the winner and she was crowned. Waving a Colombian flag and smiling broadly, she blew kisses at the audience.

When Harvey returned to the stage, Wurtzbach appeared at a complete loss of what to do.

Stunned, she walked to the front of the stage where the coveted crown was taken off the head of Miss Colombia and put on hers.

“Please don’t hold it against the ladies, please don’t,” Harvey said. “We feel so badly, but it’s still a great night.” Miss Philippines Pia Alonzo Wurtzbach, front, reacts after she was announced as the new Miss Universe. Wurtzach was wide-eyed and frozen after Harvey first revealed his slip-up and she realized exactly what that meant for her dailymail.co.uk

Pia, in a video interview posted on the Miss Universe social media accounts, described the incident as a “very non-traditional crowning moment.”

The top three contestants were asked, “Why should you be the next Miss Universe?

And the winner Miss Universe Philippines answered, “To be a Miss Universe is both an honor and a responsibility. If I were to be Miss Universe, I will use my voice to influence the youth and I will raise awareness to certain causes like HIV awareness that is timely and relevant to my country, i.e. Philippines. I want to show the world-the Universe, rather-that I am confident and beautiful from the heart.”

Earlier, Miss Universe Colombia Ariadna Gutierrez was announced as the winner of Miss Universe 2015. However, host Steve Harvey apologised for the error and said that the card had the correct name and he took full responsibility for the mistake.

“I’d like to apologize wholeheartedly to Miss Colombia & Miss Philippines for my huge mistake. I feel terrible,” he tweeted after the pageant.

“Secondly, I’d like to apologize to the viewers at that I disappointed as well. Again it was an honest mistake.”

“I don’t want to take away from this amazing night and pageant. As well as the wonderful contestants. They were all amazing,” he added. Steve Harvey holds up the card showing the winners after he incorrectly announced Miss Colombia Ariadna. The embarrassed host even showed the results card to the camera to prove that it had truly been his own personal mistake And fellow contestants were equally shocked as the card was displayed on the screen so the audience could see Harvey’s mistake dailymail.co.uk Other contestants comfort Miss Colombia Ariadna Gutierrez, top right, after she was incorrectly crowned Miss Universe at the Miss Universe pageant Sunday, Dec. 20, 2015, in Las Vegas. According to the pageant, a misreading led the announcer to read Miss Colombia Ariadna Gutierrez as the winner before they took it away and gave it to Miss Philippines Pia Alonzo Wurtzbach, pictured on left. AP Photo/John Locher (Philstar.com) Miss Colombia had celebrated her victory for more than two minutes before Harvey announced his error and Pia was crowned dailymail.co.uk 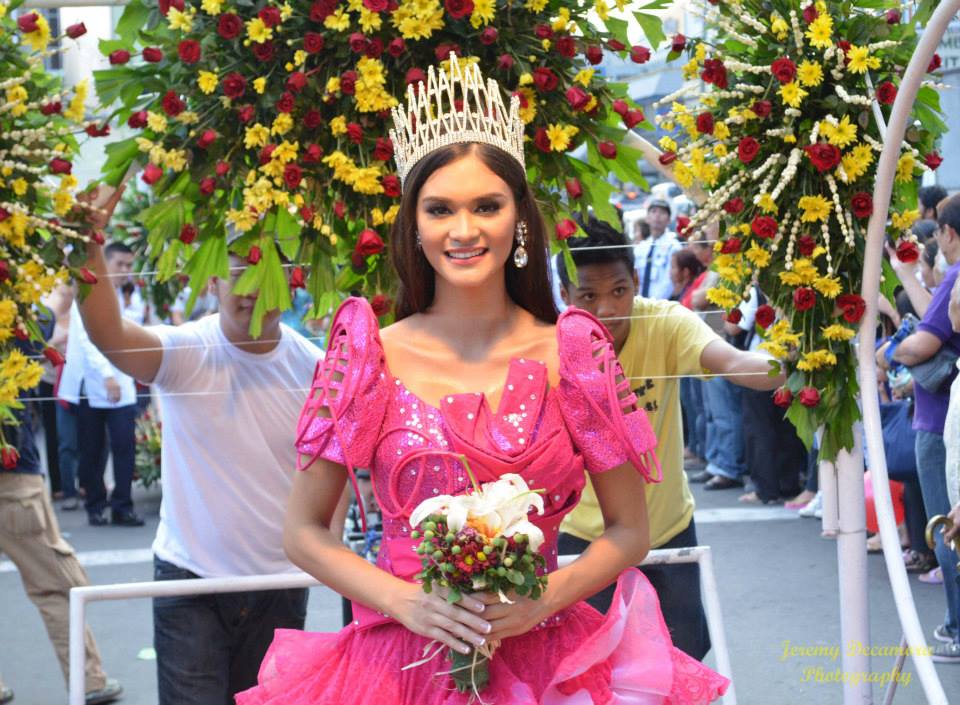 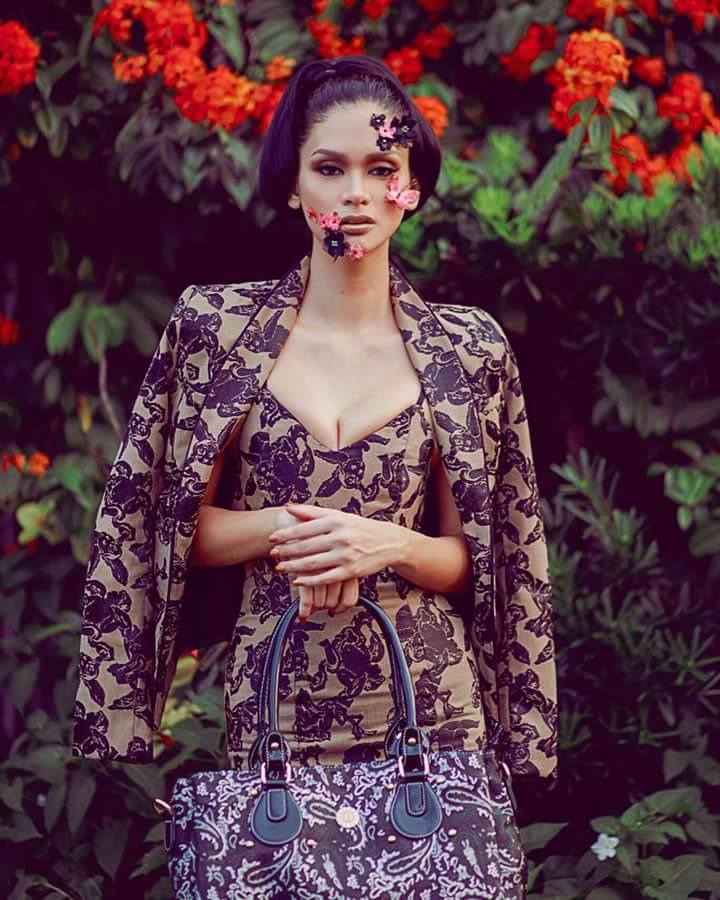 Against All Odds: No disability could keep them ap...
HEALTH EDUCATION: Harvard’s Positive Psychol...
We have to proclaim that every human being is equa...
How Could An Angel Break My Heart

Chicken Rice Around The World